Robert T. Dansak
1935 - 2021
BORN
1935
DIED
2021
FUNERAL HOME
Ott Funeral Home, Inc.
805 Pennsylvania Ave
Irwin, PA
Robert T. "Chick" Dansak, 86, of North Huntingdon, died Tuesday, Dec. 28, 2021. He was born March 4, 1935, in McKeesport, a son of the late Henry and Mary Dansak. Chick was preceded in death by his brother, Dr. Daniel A. Dansak, CAPT, MC, USN-r, of Alabama. He was married to his beloved wife, Jean, for more than 50 years, and is survived by two brothers, Henry (Aree) Dansak, of Roslyn, and Fr. Thomas E. Dansak, CAPT, CHC, USN-r, of the diocese of Pittsburgh. Chick is also survived by two sons, David S. Dansak (Julie) and Ryan L. Dansak (Gina), both of North Huntingdon. He had four granddaughters who he loved dearly, Katherine, Emily, Anna and Grace. He graduated from Thiel College with a bachelor's degree in economics and was the president of his Delta Sigma Phi fraternity for three years. While at Thiel, he lettered three years as a halfback on the football team until injury sidelined him. Chick earned a master's degree in education from Duquesne University. He worked as a teacher for two years at Monongahela High School and 33 years at East Allegheny, where he also coached football, track and cross country. He played in the inaugural season of the McKeesport youth football team, under Andy Jakomas, where his team had an undefeated season and won the league championship. As a freshman in high school, he won the honor of "Mayor for a Day." Chick was a social member at the Hartford Heights Fireman Hall for more than 25 years, where he enjoyed many a "shot and a beer" with his close friend and neighbor, Paul Genes. As a father, he spoke frequently about family, loyalty and honesty. He more than once drove miles to return money to cashiers who had given him more change than he was owed. He attended nearly every sporting event for his boys regardless if they were home or away. He was-at once-their toughest critic and biggest fan. His boys hope to live up to his example. Chick loved high school sports and would frequently attend football games with his friends, long after his sons graduated. He was integral in creating the Dansak Family Scholarship Fund, which rewards a graduating Norwin student-athlete with a scholarship for college. The family would like to extend a special thanks to Redstone Hospice Care who treated him kindly. Friends were received Sunday, Jan. 2, at OTT FUNERAL HOME INC., 805 Pennsylvania Ave., Irwin, PA 15642. A brief blessing service was held at the funeral home immediately following the viewing. He was interred in a private ceremony the following day. In lieu of flowers, please send donations to "The Dansak Scholarship Fund," c/o Norwin School District Community Foundation, 281 McMahon Drive, North Huntingdon, PA 15642.
Published by Norwin Star on Jan. 13, 2022.
To plant trees in memory, please visit the Sympathy Store.
MEMORIAL EVENTS
Jan
2
Visitation
1:00p.m. - 4:30p.m.
Ott Funeral Home, Inc.
805 Pennsylvania Ave, Irwin, PA
Jan
2
Service
4:30p.m.
Ott Funeral Home, Inc.
805 Pennsylvania Ave, Irwin, PA
Funeral services provided by:
Ott Funeral Home, Inc.
MAKE A DONATION
MEMORIES & CONDOLENCES
Sponsored by Ott Funeral Home, Inc..
8 Entries 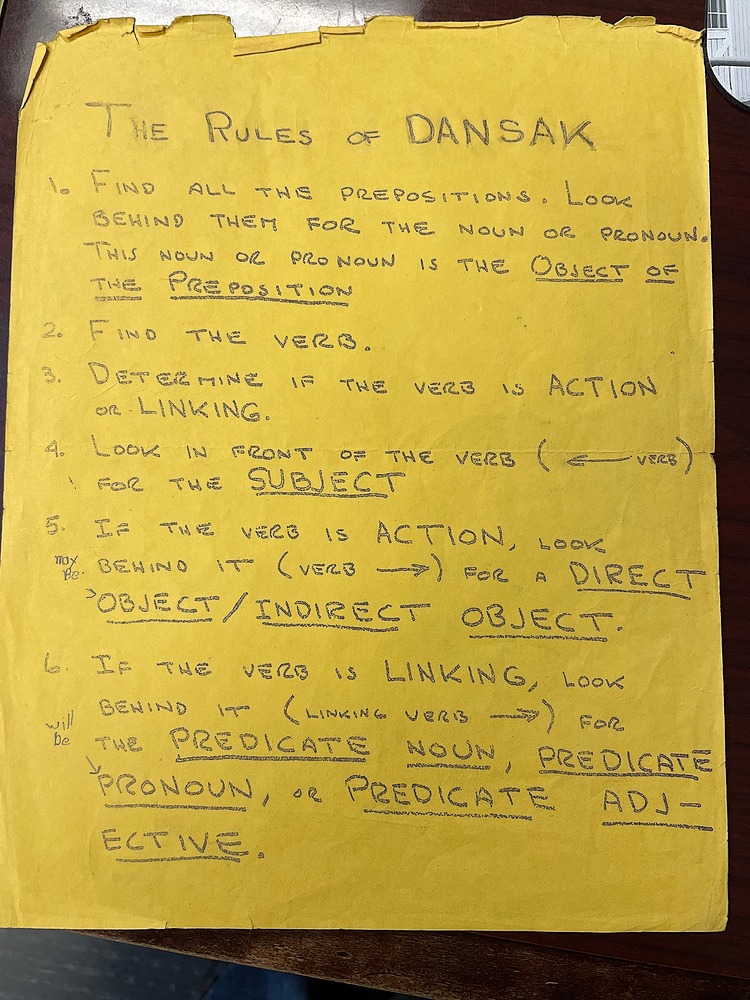 I've saved this for roughly 30 years. If anyone had Mr. Dansak for English, you would recognize this document.
Chris Cardillo
January 6, 2022
Robert Dansak was my Social Studies teacher at East Allegheny H.S. in 1972. He set the "tone" of that class by being firm and fair; he was a no nonsense teacher who respected my opinions and questions and by doing so, he helped me develop confidence and earned my respect. Mr. Dansak countered the often "dry" aspects of history by presenting facts in a way I could empathize with, and that made history more relevant to me. He was clearly a talented teacher; I was fortunate to have been one of his students! Barb (Harwas) Gretz
Barbara Gretz
School
January 1, 2022
To the Dansak family, More years ago than I care to remember, Mr Dansak was my cross-country coach at Westinghouse Memorial H. S. We were a pretty motley crew, but Coach was always enthusiastic and supportive, a positive influence on all who knew him. I never had him as a teacher, but learned many life lessons from him just the same. "Up your beat, boys, up your beat..." Larry Sarver Sarasota, FL RIP, Coach
Larry Sarver
School
December 31, 2021
Jean ~ our sympathy to you, the boys and your family.
Jack & Barb Podowski
December 31, 2021
Dearest Ryan & family, it's with loving regards and extreme sadness over the loss of your dad, that we send our prayers.... <3
The Polski Family
December 31, 2021
I'm very sorry to hear about your brother. We haven't started with the siblings yet, thank goodness. My prayers are with you and his family.
Carolyn Strawoet
December 31, 2021
My deepest sympathy to the family of Mr Dansak. Many fond memories of him during my days at East Allegheny. May he Rest In Peace
Anthony Falleroni Ea class of 76
December 31, 2021
I really do not know what to say. An impressive life that touched mine.
Lorrie Barkins
School
December 31, 2021
Showing 1 - 8 of 8 results