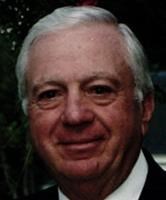 BORN
1931
DIED
2021
FUNERAL HOME
Cox Gifford Seawinds Funeral Home & Crematory
1950 20th Street
Vero Beach, FL
John T. "Jack" Stabile, 90, of Vero Beach, Fla., took his last breath on Thursday, Sept. 2, 2021, at home, with loved ones by his side. He was born May 8, 1931, in Pittsburgh, to the late John and Virginia Stabile. Jack graduated from St. Vincent Prep School in 1949, and went on to attend The College of William and Mary. Early in his college career, he met the late Helen Barber, a native of Vero Beach. Jack became enamored with her red-headed beauty and vivacity, as well as her beloved hometown. They were married upon graduating from college in June of 1953 at St. Helen Catholic Church in Vero. Their primary residence was in Pittsburgh, but they took frequent trips with three children in tow to visit the Barber family with whom Jack shared a long relationship of warmth, humor and respect. Helen died in Vero in January 2009, and Jack remained a steadfast Vero resident, without ever losing his loyalty to his Pittsburgh hometown roots. Jack joined his father, John Sr., an entrepreneur who had the foresight to start the business of providing parking in 1925 in the Golden Triangle of Pittsburgh. Together, they grew the family parking business (Alco Parking Corp./Grant Oliver Corp.) to become the largest parking facility owner/operators in Western Pennsylvania. Jack was devoted to numerous civic, charitable, and arts organizations, as well as being very active in clubs in both Pittsburgh and Vero Beach throughout his life. In Pittsburgh, his many contributions included serving on the Board of the Vocational Rehabilitation Center, the Pittsburgh Opera Society, and the Civic Light Opera. He was also an active member of Rotary Club, Amen Corner, and served as president of the University Club of Pittsburgh and president of the Allegheny Club. He was a member of the Duquesne Club, and a major supporter of the Pittsburgh Cultural Trust, which serves to further develop the legacy of Pittsburgh as a vibrant center for the arts, playing an essential role in urban revitalization. He was an enthusiastic supporter of the Vero Beach Museum of Art and VNA Hospice. Jack served on the Board of the Carlton Condo Association, his final home in Vero. Jack loved fishing, boating, bowling, golf and card playing. He combined these interests with his love for opera, music, art, architecture and the beauty of the natural world to create a life that he enjoyed sharing with many friends and family. He was an avid golfer with numerous Invitational accolades at Chartiers Country Club, John's Island Club and Quail Valley Golf Club. Those who knew Jack were inevitably met with his unique ability to be both affectionate and mischievous. His knack for infusing the moment with his own brand of subtle humor was evident until the end, despite his health challenges. He was committed to being a gentleman, by his definition, "one who does not offend." He conducted himself with modesty, dignity and an inimitable charm. In addition to his wife, Jack was predeceased by two sisters, Rita Allan and Carol Moore; and two sisters-in-law, Carolyn Barber Vreeland and Merrill Barber Dick. He is survived by his three children, Victoria Stabile (spouse, Dennis Stoker), of Princeton, N.J., Merrill (spouse, Miroya) Stabile, of Pittsburgh, and Pamela Stabile (spouse, Will LeBlanc), of Woodstock, N.Y.; five grandchildren; and his dearest companion, JoAnn Whelan. Jack was a faithful member of the Catholic Church, attending and supporting Our Lady of Grace Church in Pittsburgh and Holy Cross Church in Vero. A Mass of Christian Burial will be determined at a later time. In lieu of flowers, please make a donation in Jack's honor to an art, religious, or charitable organization of your choice. Online condolences may be shared at www.coxgiffordseawinds.com. line
Published by Triblive Online Only on Sep. 16, 2021.
To plant trees in memory, please visit the Sympathy Store.
MEMORIAL EVENTS
To offer your sympathy during this difficult time, you can now have memorial trees planted in a National Forest in memory of your loved one.
Funeral services provided by:
Cox Gifford Seawinds Funeral Home & Crematory
MAKE A DONATION
MEMORIES & CONDOLENCES
Sponsored by Cox Gifford Seawinds Funeral Home & Crematory.
2 Entries
So sorry for your loss. John Lajzo from H & S Plumbing and Junction Climate Control send their condolences. Prayers for your family.
Patty Simms, John Lajzo
September 16, 2021
My condolences to all of the family, Jack was a good man and will be greatly missed--
Cal Chase
Work
September 16, 2021
Showing 1 - 2 of 2 results