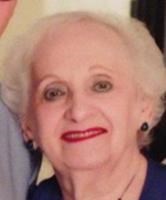 BORN
1926
DIED
2021
FUNERAL HOME
Ralph Schugar, Inc. Funeral Chapel
5509 Centre Avenue
Pittsburgh, PA
Mary Baker Marks passed away Friday, Sept. 3, 2021. Born June 11, 1926, in the Lower Hill District of Pittsburgh, Mary Baker Marks was the daughter of Joseph and Sarah Baker, of Lithuanian descent. Mary's immigrant mother lost her spouse at a young age, leaving Sarah to raise seven children on her own, relying on perseverance, strength and belief in G-d, qualities that she passed on to Mary. Mary assisted her mom by working in a grocery store after school and weekends for four dollars per week. Upon graduation from Fifth Avenue High School, Mary took a position with Cazen's, a wholesale Kosher food distributor, and at the same time, attended evening classes at the University of Pittsburgh. At 18, Mary wed the first love of her life, Karl Zlotnik, with whom she had two children, Joanne (the late Jeffrey Pobiner) and Stanley (Nikol). Tragedy struck their blissful life at an early stage and Karl, at age 27, passed away from rheumatic heart disease. Like her mom, Mary was widowed at a young age. With a three-year old daughter and 12-month-old son, Mary continued to work as a bookkeeper with Cazen's and then with B & L Sour Cream. Well-appreciated and highly-esteemed by her boss, he introduced her to his close friend, Herbert "Marky" Marks. In 1956, several years after Karl's death, they married. Her third child, David (Dori), was born in 1958. Mary then took an accounting job with Children's Hospital, a position she held until Herbert's health began to decline. At age 57, Mary retired and became a full-time caregiver for her husband. Four years later, twice widowed, she chose not to return to her professional career, but instead concentrated on her grandchildren and volunteer work. Well-known for her wit, sense of humor and big heart, she devoted her time to Children's Hospital and the Jewish Community Center, where she became a fixture. An early participant in the JCC Yiddish class, she was asked to assume teaching responsibilities for one year. One year turned into 25 years based on her enormous following. With attendance standing-room-only regularly, her classes always ended with an off-color Yiddish joke. Mary also volunteered with the JCC Friendship Line where she was tasked with calling on two or three senior citizens and wishing them a good Sabbath each Friday. In a short time, those two or three calls grew to over three hundred weekly Sabbath calls. As a result, she became affectionately known as "Shabbos Mary," with people near and far hoping to make her call list. The recipient of several service awards, including the Lillian Goldstein Senior Volunteer Leadership Award, Jewish Association on Aging Eight Over Eighty, Jewish Community Center of Pittsburgh's Tribute for Three, and Technion Women's Division Outstanding Dedication Award, Mary also was a life member of Hadassah, Na'Amat, and Weinberg Ladies Auxiliary, where she coordinated their benevolent fund. The longest living tenant of the Maxon Towers, building management and her neighbors recognized her as the "Maxon Mayor" along with neighbor and former Pittsburgh mayor, Sophie Masloff. A steadfast and trusted friend to many, she frequently coordinated dinner and entertainment outings with the Maxon Towers group, called "Friends Forever." Mary was a devoted sister to her lone surviving sibling, Rose Thompson, as well as her predeceased siblings, Sam Baker, Donald Baker, Esther Karpo, Sylvia Karpo and Sally Chudacoff. More than anything else, her calling was the role of mother and grandmother. She served this role with an unmatched excellence and distinction as an adoring and loving mother and then grandmother to her eight grandchildren, including Joshua Marks (Brooke), Jordan Marks (Zohar), Ben Marks, Dustin Marks, Adam Marks, Shawn Pobiner (Lisa), Todd Pobiner, and Dana Feldman (Michael). The matriarch of the family, she also was a doting great-grandmother to her four great-grandchildren, Jeffrey Pobiner, Sloan Marks, Jacob Feldman and Dylan Feldman. Services will be at 1 p.m. Sunday at RALPH SCHUGAR CHAPEL INC., 5509 Centre Ave., Shadyside. Visitation will be one and one half hours prior to services (11:30 a.m. to 1 p.m.). MASKS AND SOCIAL DISTANCING ARE REQUIRED FOR VISITATION AND SERVICE. Interment will be in Tiphereth Israel Cemetery. Contributions in Mary's memory may be made to the JCC of Greater Pittsburgh, Chabad of Squirrel Hill, Western Pennsylvania Juvenile Diabetes Research Foundation, and the Stanley M. Marks Endowed Research Fund at UPMC Hillman Cancer Center. www.schugar.com.line
Published by Triblive Online Only from Sep. 4 to Sep. 5, 2021.
To plant trees in memory, please visit the Sympathy Store.
MEMORIAL EVENTS
Sep
5
Visitation
11:30a.m. - 1:00p.m.
Ralph Schugar, Inc. Funeral Chapel
5509 Centre Avenue, Pittsburgh, PA
Sep
5
Service
1:00p.m.
Ralph Schugar, Inc. Funeral Chapel
5509 Centre Avenue, Pittsburgh, PA
Funeral services provided by:
Ralph Schugar, Inc. Funeral Chapel
MAKE A DONATION
MEMORIES & CONDOLENCES
Sponsored by Ralph Schugar, Inc. Funeral Chapel.
4 Entries
I am Care giver at heritage place , where I served Mary as a aid in her private room. Mary was a wonderful person who is thankful anytime you does something for her with a big smile. I am so glad to be part of that wonderful women journey. My sincere condolences and sympathy to all the family. I honor her memory. Rest In Peace.
Idiatou Diallo
November 19, 2021
My father, Manuel Kolski, so appreciated Mary´s calls each week wishing him a good Shabbat. It seems her mission was to connect to others with positive thoughts. We honor her memory and imagine her family is proud to carry on that spirit. Annette Kolski-Andreaco and family
Annette Kolski-Andreaco
September 18, 2021
My mother lived down the hall from Mary at maxon towers for 23 years. After Mom passed away Mary would call me for shabbat every week. Herm she stopped her calls I called her. I miss her calls. My sympathies to the family
Joanne Friedman
September 7, 2021
Dr. Mark´s - My sincere condolences to you and your family. My thoughts and prayers are with you today.
Tony Lucarotti
September 5, 2021
Showing 1 - 4 of 4 results