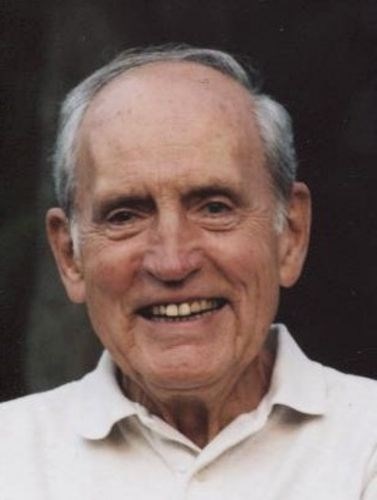 BORN
1922
DIED
12
FUNERAL HOME
Galone-Caruso Funeral Home
204 Eagle St
Mount Pleasant, PA
Bernardo Hugh Tovar, 92, of Champion, died peacefully at St. Anne Home, Greensburg, at 12:05 a.m., Saturday, June 27, 2015. Known professionally as B. Hugh Tovar, and as Hugh to his friends and family, Mr. Tovar was born Dec. 27, 1922, in Bogota, Colombia, the son of Bernardo Tovar Borda and his wife, Helen McManigal Tovar, of Chicago, Ill. The family returned to Chicago in 1924, and Hugh lived most of his early years there. His early education was in the parochial schools in Chicago, and during those years he became a devoted and ever hopeful fan of the Chicago Cubs. He attended the Portsmouth Priory School in Portsmouth, R.I., graduating in 1941. He has been closely associated ever since with the Benedictine monks at Portsmouth. Hugh entered Harvard in September 1941, and joined the ROTC. His courses at Harvard focused on the liberal arts and languages, coupled with the required military science. His ROTC class was called to active duty in June 1943. Hugh received his diploma for AB, Class of 1945 from Harvard in 1944 because he passed his comprehensive exams. In June 1944, Hugh graduated as a newly minted second lieutenant. After various assignments and training in Infantry, Artillery and Communications, Hugh volunteered and was selected to join the Office of Strategic Services (OSS) in 1945. He was flown to Kunming, China, and was active in the search for prisoners of war held by the Japanese forces in various parts of Asia. He parachuted into Vientiane in French Indochina (as Laos was called then) at the end of World War II. In September 1945, OSS was disbanded and Hugh was discharged from the Army. He returned to his family in Lake Forest, Ill., and attended graduate school at Northwestern University studying political science and economics. Former OSS friends and associates told him of the successor organization, the Central Intelligence Agency (CIA), which seemed to offer interesting career prospects, especially in the increasingly turbulent Indochina region. In 1947, Hugh accepted a position with Sears, Roebuck and Co. as it was opening new endeavors in Latin America. Another approach from the CIA brought Hugh to Washington in mid-1948 and he began his 30-year career with the CIA. Hugh married Deborah McCarthy in 1948, and found himself transferred to Manila in 1950, with their first son, Gregory, born in 1949. Manila was an agreeable place to live and work, as indeed were Hugh's successive tours of duty overseas in later years, namely Malaysia, Indonesia, Laos and Thailand, all of which he headed as the Agency's senior representative. During his years of assignment to CIA Headquarters, he held senior supervisory positions overseeing political action and counterintelligence. When Hugh and Deborah divorced in 1972, Hugh applied for a Declaration of Nullity. The Marriage Tribunal of Chicago completed its investigation and granted the declaration in August 1975. Hugh and Pamela Kay Balow were married on Dec. 31, 1975, at Holy Redeemer Church in Bangkok, Thailand. Theirs was a very happy marriage. Hugh retired from the CIA in 1978 and accompanied Pamela on her assignments with the CIA to Rome, Singapore and Australia. Hugh wrote extensively regarding his experiences in Southeast Asia and regarding the CIA for various organizations and publications during his retirement and produced a wonderful magnum opus recording the history and genealogy of both the Tovar and McManigal families. In addition to Pamela, Hugh is survived by his children, Gregory Hugh (Suzanne Weisband), of Birmingham, Ala., Andrea Christina Tovar (Albert Tencate), of Easthampton, Mass., Peter Quentin Tovar (Kathleen Moore), of Princeton, N.J., Michael Vincent Tovar (Sarah Bender), of McVeytown, Christopher Duff Tovar, of Spring, Texas, and James Roderick Tovar, of Burbank, Calif. He had seven grandchildren, Alan Poey (Alyssa Geiger), Christopher Poey, Stephen Tovar, Alex Tovar, Laura Tovar, Becket Tovar and Bernardo Tovar. And his newest joy was the birth of his first great-grandchild, William Alan Poey. He had many loving nieces, nephews, sisters and brothers-in-law, extended family members and literally hundreds of friends and colleagues, with whom he kept in touch over the years. He was preceded in death by his father, mother and brother. Family and friends will be received from 2 to 4 and 6 to 8 p.m. Wednesday, July 1, 2015, at the GALONE-CARUSO FUNERAL HOME, 204 Eagle St., Mt. Pleasant. A blessing will be held at 9:15 a.m. Thursday in the funeral home, followed by Hugh's 10 a.m. funeral Mass in St. Raymond of the Mountains Roman Catholic Church, 170 School House Lane, Donegal, PA 15628. Interment with military rites accorded by American Legion Post 446 will be in St. Raymond Cemetery. The family is requesting that in lieu of flowers, donations may be made to the Portsmouth Abbey School, 285 Corey's Lane, Portsmouth, RI 02871 or to St. Raymond of the Mountains Roman Catholic Church, 170 School House Lane, P.O. Box 330, Donegal, PA 15628, in memory of Hugh Tovar. To offer an online condolence, please visit our website at www.galone-carusofuneralhome.com.
Published by Tribune Review on Jun. 28, 2015.
To plant trees in memory, please visit the Sympathy Store.
MEMORIAL EVENTS
To offer your sympathy during this difficult time, you can now have memorial trees planted in a National Forest in memory of your loved one.
Funeral services provided by:
Galone-Caruso Funeral Home
MAKE A DONATION
MEMORIES & CONDOLENCES
Sponsored by Galone-Caruso Funeral Home.
0 Entries
Be the first to post a memory or condolences.