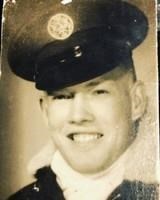 BORN
1937
DIED
2021
FUNERAL HOME
FIR LANE MEMORIAL PARK
924 176TH ST E
SPANAWAY, WA
Edwin Drury
November 9, 1937 - October 7, 2021
Spanaway, Washington - Ed completed his last flight in the early morning of October 7th. Ed was born and raised in Woodstock, Vermont. He graduated from Woodstock Union High School, where he participated in football and was a ski patrol member. Upon graduating from high school, he volunteered with the United States Air Force that became his career for 22 years. He was a flight engineer for C130 aircraft, serving in the Vietnam War, Panama crisis, and the Cuban crisis. As a decorated war veteran, one of his defining moments was his presence during the release of the POWs at the end of the Vietnam War. He and his squadron had the honor of flying many of the POWs home.
Ed was a kind and generous man to his family, friends, and fellow airmen. When Ed retired, bowling became his passion.
Ed will be missed by his wife of 62 years, Linda; son, Bryan; daughter, Traci; grandchildren, Bryce, Corey, and Zachary; great-grandchildren, Mabel, Mila, and Maxwell; and his best friend, Jake.
Donations to your favorite charity may be made in Ed's honor.
Ed will be laid to rest with full military honors at Tahoma National Cemetery, Kent, WA, on October 27th at 1 PM. All are welcome.
Mission Accomplished.

Published by News Tribune (Tacoma) on Oct. 17, 2021.
To plant trees in memory, please visit the Sympathy Store.
MEMORIAL EVENTS
To offer your sympathy during this difficult time, you can now have memorial trees planted in a National Forest in memory of your loved one.
Funeral services provided by:
FIR LANE MEMORIAL PARK
MAKE A DONATION
Please consider a donation as requested by the family.
MEMORIES & CONDOLENCES
Sponsored by FIR LANE MEMORIAL PARK.
3 Entries
During 1972-3, I was on a C-130 crew with Ed in Southeast Asia. We were both on an aircrew that went to Gia Lam airport in Hanoi to support the release of American POWs. This was in March, 1973. I had not seen Ed in many years. He was an outstanding flight engineer, with a terrific sense of humor. May his soul rest in peace with God. I may have some pictures of Ed from 1972-3, I will try to find them and upload them here.
John Anderson
Work
November 3, 2021
On behalf of my late father Ike Williams we send prayers to your family and may you rest well
Gloria Jarvis (Williams)
October 20, 2021
As the days and weeks pass, and as you return to life's routine, may you continue to feel comforted by the love and support of family and friends. Please find comfort in the words found at 2nd Thessalonians 2: 16,17.
DT
October 14, 2021
Showing 1 - 3 of 3 results