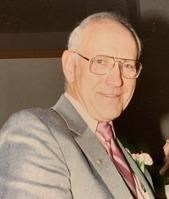 BORN
1930
DIED
2021
FUNERAL HOME
Powers Funeral Home
320 West Pioneer Avenue
Puyallup, WA
Garold "Elvin" Seeley
October 10, 2021
Tacoma, Washington - Garold 'Elvin' Seeley passed away at the age of 91 years. He was born in Leahy WA, on October 9, 1930, one hour, ten minutes after his twin brother, Harold Melvin Seeley. They were the eldest sons of Earnest & Sallie Seeley. Elvin grew up in the Baldhills area until 1942, when his family moved to the Victor Falls-Rhodes Lake area of Pierce County. During his teen years, Elvin worked at the Van Vonavill Bulb Farm in Orting, the "cannery" in Sumner, Marco's Candy of Tacoma, Northern Pacific Railroad yard in Tacoma, and Northwest Metals in Kent. As a teenager, Elvin developed his interest in auto mechanics. He traded his horse for a 1927 Model T that hadn't run for five years. He had to borrow a horse to pull the car home.
Elvin suffered many hardships as a child, including polio, which built in him a compassionate character toward all people.
Elvin joined the US Navy in 1950, serving in the Korean Conflict aboard the USS Toledo as a Gunner's Mate. During his enlistment, he married Ruth Hayden. They divorced in 1954 and had no children.
On October 21, 1955, Elvin married Maybell Badgley. They bought a home in the Victor Falls-Rhodes Lake area where they raised three children. Elvin was hired by the Boeing Company and spent 33 ½ years as a Tool Grinder. Maybell passed in 1976. In 1977, he married Ethel McClure. They enjoyed 44 years of marriage together.
Elvin always expressed a genuine interest in his community, and actively worked for what he believed to be 'right for everyone concerned'. As a member and president of the Victor Falls-Rhodes Lake Community Club, he served on many community & county projects. His other interests included working on vehicles as the neighborhood mechanic, fishing, camping with his family, farming, and gardening.
Elvin was preceded in death by his twin brothers Harold Seeley, Chester Seeley, and Cecil Seeley; wife Maybell Seeley; granddaughter Carrie Daher.
Elvin is survived by his wife Ethel Seeley; sister Florence Husa; daughter Joyce (Ray) Fike; son Steven (Hjordis) Seeley; son Alan (Jamie) Seeley; step-daughters Maree (Michael) Martin; Debbie (Jerry) Sutton; Cindy Donovan; Kathie McClure; step-sons Paul McClure; Mark (Teresa) McClure; Dan (Dawn) McClure; Matt McClure; 23 grandchildren, and 43 great-grandchildren.
A Celebration of Life to be held at a later date. Memorial donations may be made to the American Heart Association https://www.heart.org/?form=legacy

Published by News Tribune (Tacoma) on Oct. 26, 2021.
To plant trees in memory, please visit the Sympathy Store.
MEMORIAL EVENTS
To offer your sympathy during this difficult time, you can now have memorial trees planted in a National Forest in memory of your loved one.
Funeral services provided by:
Powers Funeral Home
MAKE A DONATION
Please consider a donation as requested by the family.
MEMORIES & CONDOLENCES
Sponsored by Powers Funeral Home.
2 Entries
We will miss this beautiful gentle man! A great friend and neighbor!
Jim and Pat Litzen
October 29, 2021
May your memories of the wonderful times you shared with your loved one comfort you and your family, today and always.
American Heart Association
October 28, 2021
Showing 1 - 2 of 2 results