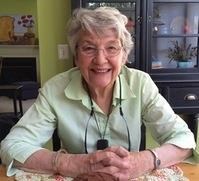 BORN
1928
DIED
2021
FUNERAL HOME
LEWIS FUNERAL CHAPEL
5303 KITSAP WAY
BREMERTON, WA
Joanne Stone
September 8, 1928 - May 29, 2021
Bremerton, Washington - Joanne Stone, age 92, passed away peacefully on May 29, 2021 at her residence in Bremerton. She was born at St. Joseph's hospital in Tacoma on September 8, 1928, to John Claude Bartholet and Leona Ida Eschbach Bartholet. John was a highway engineer for the state of Washington, and the family, including Joanne and six older siblings, moved frequently throughout the state to follow his work. Leona was a resourceful homemaker, a trait passed on to Joanne.
Joanne graduated from South Kitsap High School in Port Orchard in 1946 and worked for the Bremerton Title Company. She met Warren Stone, a handsome naval officer, in July 1948 on a blind date and they married on June 4, 1949 at Our Lady Star of the Sea Catholic Church in Bremerton. Joanne and Warren had seven children and lived all of their married lives in the Puget Sound area, except for a few years when they lived in Mount Angel, Oregon. Joanne and Warren were married 54 years before Warren died on December 27, 2003. Joanne continued to live in Gig Harbor after Warren's death, until moving to Virginia in 2015 to live with her daughter Mary. In 2017 Joanne returned to the northwest and lived the remainder of her life at Bay Vista Commons in Bremerton.
Joanne was also predeceased by her beloved daughter, Kathleen Stone Moss, who died of cancer on August 27, 2018. Kathleen's dedication to her mother's well being as Joanne aged was a continuing inspiration to Joanne's other children as they sought to ensure the best care possible for Joanne in her final years of life. Joanne is survived by children Patty Stone (Terry Mills) of Belfair; Charlie Stone (Cheryl) also of Belfair; Therese Fowler of Puyallup; Ed Stone (Linda) of Port Orchard; Paul Stone (Wendy) of Tacoma; and Mary Steiner (Marty Fuchs) of Ashburn, Virginia. She is also survived by 18 grandchildren, numerous great-grandchildren, nieces and nephews.
Joanne enjoyed gardening, taking walks, and reading the Catholic liturgy, but her pride and joy was her family. Her children remember her fondness for baking desserts and homemade bread (6 loaves at a time) and her ability to get dinner on the table at exactly 5:30 every day. She always had a smile on her face and a kind word for everyone. Joanne was much loved and will be greatly missed.
An online memorial can be seen at www.lewischapel.com

Published by News Tribune (Tacoma) on Jun. 10, 2021.
To plant trees in memory, please visit the Sympathy Store.
MEMORIAL EVENTS
Jun
8
Visitation
10:15a.m. - 11:00a.m.
St. Nicholas Catholic Church
3510 Rosedale Street, Gig Harbor, WA
Jun
8
Service
11:00a.m.
St. Nicholas Catholic Church
3510 Rosedale Street, Gig Harbor, WA
Funeral services provided by:
LEWIS FUNERAL CHAPEL
MAKE A DONATION
MEMORIES & CONDOLENCES
Sponsored by LEWIS FUNERAL CHAPEL.
4 Entries
Patty and family.....so very sorry for your loss. Though neither of us knew her, we most certainly believe she was a most wonderful woman. May your most precious memories of a beautiful life with her bring you all comfort and peace.
Debbie and Don Bohlmann
Friend
June 8, 2021
Auntie Jo was always so special and I have many fond memories of her. I wish I'd been closer to her.
Debi (stone) Carrier
Family
June 4, 2021
RIP Auntie JoAnne. Always loved seeing all you gals and Uncle John together
Colleen Gorang (Cates)
Family
June 4, 2021
Miss Joanne was a dear sweet soul and I,m thankful that I was a care giver to her for a little while. DEBBIE TURNER
DEBBIE TURNER
Friend
June 4, 2021
Showing 1 - 4 of 4 results