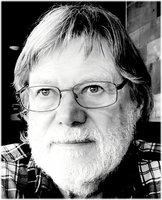 BORN
1944
DIED
2021
FUNERAL HOME
Weeks-Dryer Mortuary
220 134Th St S
Tacoma, WA
Robert A. Jackson
February 14, 1944 - August 19, 2021
Auburn, Washington - Bob Jackson was in all ways a fine man. He was smart and handsome with good native intelligence honed by his lifelong love of reading. He was a self- taught computer whiz, auto and boat mechanic, builder, gardener, hunter, fisherman and jack of all trades who lived a skilled and productive work life. Heroes are not always dragon slayers but those who live through life's difficulties and remain honorable, cheerful and kind. He was also humble, considerate, generous and loving. Those of us lucky enough to have been in his life will miss him forever.
Born to Robert E. and Magdalena Jackson in Seattle on 2/14/1944, Bob left us on 8/19/2021. He was the love of his wife, Virginia Dailey Jackson's life. His loss is deeply felt by children Darwin Jackson, Kimmi Granlund and Bobbi Jackson. He also leaves behind siblings Kathy Schwarz, Marie Sudderth and Rodney Jackson; grandchildren Cody, Ana Grace and Cesar Jackson, Alexa and Ricci Contreras and best friend David Brown.
He lived in or near Federal Way for his entire 77 years, attending FW schools from first grade on. He and Virginia noticed each other there when they were 7, went to a dance together at 13, transited through life on very different paths until revisiting that old attraction at the FWHS '62 20 year reunion. They've been together ever since - until Parkinson's disease struck Bob down.
A loyal union man, he worked at Boeing for over 37 years surviving all layoffs because of the quality of his work and the quality of the man. During his working years he skied, raced dirt bikes, toured the west on his motorcycle, went far off road in his Jeep, cooked gourmet meals and took wonderful care of his elderly mother. He was a very involved single father to his two daughters, hosting their friends, chaperoning field and ski trips and attending their sporting and school events at Tukwila schools. Retiring at 55, he proved to be good at retirement, too. His boat, Pacifier, a 32' Bayliner was his pride and joy. If he wasn't at the marina washing and polishing it, he and Ginny were out cruising Puget Sound - often with the Boeing Boat Club. In his later years he still loved to cook; loved good food, gin martinis and his wife and children, not necessarily in that order.
We'll celebrate his life in many ways large and small until spring when maybe we can safely get together. Puget Sound WildCare, Planned Parenthood and Treehouse for Foster Care were his charities of choice.

Published by News Tribune (Tacoma) on Sep. 19, 2021.
To plant trees in memory, please visit the Sympathy Store.
MEMORIAL EVENTS
To offer your sympathy during this difficult time, you can now have memorial trees planted in a National Forest in memory of your loved one.
Funeral services provided by:
Weeks-Dryer Mortuary
MAKE A DONATION
MEMORIES & CONDOLENCES
Sponsored by Weeks-Dryer Mortuary.
8 Entries
I remember that long ago class reunion. Bob brought his beautiful daughter I believe which I thought "how cool is that". Then I noticed you & Bob talking & that was the start of your 40 year love affair. I will always remember Bob from our school days as not only good looking but he had a quiet strength & someone who I thought did not have to impress others. It sounds like he lived a full & wonderful life. You & your family will greatly miss him, but beautiful memories will remain in your hearts forever. Condolences & hugs to you my dear childhood friend.
Donna VanDusen Nault
School
September 20, 2021
So sorry to hear of Bobs passing. Sending comforting hugs to you Virginia and the family.
Sharon Sprouffske
September 20, 2021
May God bless you and your family in this time of sorrow.
susan wendt (mase)
School
September 20, 2021
I am so sad to hear of Bob´s passing. I loved reading his obituary. I learned many things about both of you. Please know my thoughts and especially prayers are with you and pray you will feel peace and genuine love from your many friends. May your memories also fill your heart in the coming days when you are in need of special love and comfort.
Dawn Ward Wilkes
School
September 20, 2021
So well remembered and well written. Thinking of you.
Janet Blankley
School
September 19, 2021
We were so sorry to hear about Bob's death. We always enjoyed our time with you and Bob while boating with the boat club.
Sharron and Denny Horn
September 19, 2021
I have SO MANY wonderful memories of spending time at your house when I was a kid. You and Bob always made me feel INCREDIBLY special. I'm so sorry to hear of his passing. Big hugs to you.
Anna Dailey McCartney
September 19, 2021
We have missed boating with the Jackson´s. They were always such a fun couple and great to be around on all our boating adventures. Bob will be greatly missed.
Pat and Karen Forbes
Friend
September 19, 2021
Showing 1 - 8 of 8 results