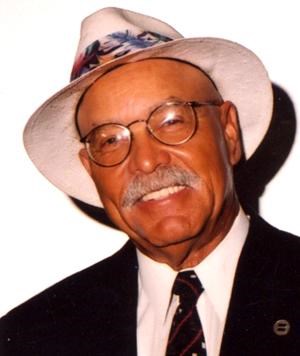 BORN
May 15, 1925
DIED
February 7, 2015
Cressworth C. Lander 5/15/1925 - 2/7/2015 Cressworth C. Lander was a forward-thinking administrator who worked in the public sector all of his professional life. As a city of Tucson department head he was responsible for the city's community and economic development activities as well as the development and management of public and affordable housing. Cress was born and raised in Tucson, the second of five children. He attended Dunbar School and thrived in the nurturing environment, graduating as valedictorian of his class. After attending Tucson High School he served with the U.S. Marine Corps during World War II at Camp Lejeune, N.C., achieving the rank of gunnery sergeant. He began his career in public service with the state of Arizona. During the mid-1960s, he worked for the Office of Economic Opportunity as field coordinator to local Community Action Programs. His success in helping people establish relationships with government led to his lifelong commitment to working within the system for positive change. In 1969 he was hired as Model Cities director for the city of Tucson. Model Cities was a federal government program designed to reverse the debilitating effects of prejudice and studied neglect on urban communities. As director, Cress created one of the top Model Cities programs in the country. The legacy of his efforts remains institutionalized today. In 1979, the Carter Administration recognized Cress's management and leadership skills and he was recruited to become the managing director of the Civil Aeronautics Board (CAB) in Washington, D.C. He took a two-year leave of absence from the city of Tucson to run the CAB and sunset the agency. During his tenure with the CAB, he became a charter member of the federal government's Senior Executive Service. Returning to Tucson in 1981, Cress continued to provide innovative leadership within city government. He retired from the city of Tucson in 1992, but he still served the community in many capacities, one of which was board chair of The Dunbar Coalition, Inc., which is renovating Dunbar School, the segregated institution he attended as a child. After being elected chair in 2002 he jumpstarted efforts to raise funds to renovate the school. He spearheaded efforts that brought in approximately $4.8 million in public and private funds for the project. In addition to his Dunbar work, Cress served on the boards of Park Villa Casitas, a community development housing organization; the Tucson Housing Foundation; The University of Arizona African American Advisory Council; and the African American Initiative. He was a member of the Gamma Alpha Boule of Sigma Pi Phi Fraternity; the Greater Southern Arizona Area Chapter of The 9th and 10th Horse Cavalry Association; and Pima Lodge #10 Free & Accepted Masons, Prince Hall, Arizona Jurisdiction. Cress was preceded in death by his parents James Franklin Lander and Julia Belle Watson Lander; and brothers James Julian Lander and Glendal Lander. He is survived by his wife, Linda Chyrl Hill Lander; daughter, Melodie Lynnette Lander of Phoenix; daughter, Rochelle Elaine Lander of Los Angeles; granddaughter, Lonnette Simmons of Phoenix; great-grandson, Jaylen Simmons of Phoenix; sister, Patricia Lander Rodez of Benton Harbor, Mich.; brother and sister-in-law, Donald and Jeanette Lander of Arcadia, Calif.; and many nieces and nephews. His life will be celebrated Monday, February 16, 2015 11:00 a.m. at Mount Calvary Missionary Baptist Church, 210 E. Lester St. In lieu of flowers, the family ask for donations to The Dunbar Coalition, Inc., P.O. Box 86132, Tucson, AZ 85754-6132.

To plant trees in memory, please visit our Sympathy Store.
Published by Arizona Daily Star on Feb. 15, 2015.
MEMORIAL EVENTS
No memorial events are currently scheduled.
To offer your sympathy during this difficult time, you can now have memorial trees planted in a National Forest in memory of your loved one.
Funeral services provided by:
Funeraria del Angel
GUEST BOOK
9 Entries
To Cheryl and the Lander Family,

Here's hoping the good memories will sustain you at this time. I remember Cress & Cheryl from my time in Tucson in the mid 70s. Peace.
Rose Caldwell (Key)
April 7, 2015

To the Lander family: Cress was an icon in the city of Tucson. He will be greatly missed.

When I returned home in 1971, I got my first real job through Model Cities (which Cres was instrumental in help- ing form the program)in 1972 and retired from the same job after 40 years in Jan. of 2012.

Cress touched everyone's heart he met and he will long be remembered.

R.I.P. Mr. Lander.
February 19, 2015
Re name something in his honor! Great leader, met him in
1966 . Tucson he made us proud! My sister in law worked for him! Grace gray price Rip!
James Price
February 19, 2015
Having known Cress Lander for almost 40 years, I will miss him terribly. To the remaining Lander family, my heartfelt sympathy -- such a great loss to you, the family, and to the Tucson community!
Robin Schaefer
February 18, 2015
This man was a tower of the community, who never stopped trying to make it better for everyone. His loss will be felt by everyone who cares about the foundations of society and the role to be played by those without power and wealth. All his life he worked for the people.
Georgia Brousseau
February 15, 2015
My deepest condolence to the Lander family. May the legacy of Cress Lander live on in the hearts and minds of those who knew him and for generations to come.
Rev. Lee May
February 15, 2015
Rest in peace Mr. Landers, you were one of the few higher ups in the City who dealt with this "newbie" in the most professional way. You were a rarity, never compromising your ethics. Godspeed and prayers of comfort to the family.
Kharmyn Guzman-Cousins
February 15, 2015
Cress showed us all how to live and serve others. RIP and God Bless!
Bobby Burns
February 10, 2015
To the Cressworth C. Lander family. My prayer is that the power of prayer, love, and all good memories of Cress be in your heart to keep you strong during this time of great sorrow. I am thankful that God put him in my life back in the 70's because it helped make me a better person. May he R.I.P. and watch over us down here missing him. Yours in Christ.
Clarence Brown
February 10, 2015