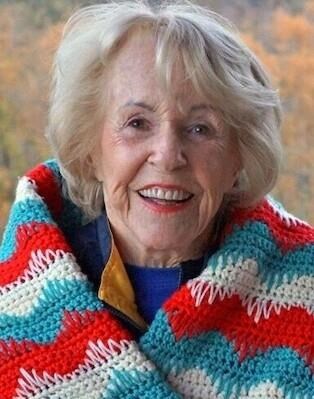 Carol was an honored playwright, published poet, theater entrepreneur, philanthropist and, when married to Dr. Merlin K. DuVal, a driving force in the recruitment of the founding faculty at the University of Arizona College of Medicine. While serving on the state art's commission, she met and subsequently married fellow Art's Commission member Jack Whiteman with whom she had some of the happiest years of her life.

Carol lived in a home near Phoenix Mountain Park. Her daily ritual began opening the curtains, looking at the mountains and declaring, "that's fabulous" often followed by surveys of the clouds, and, later in the day, periods of silence when, as the unofficial gardener, she faithfully tended to the Arizona sky and its magnificent orange-red blossoms.

Carol was born in Lowell, Massachusetts in 1922, grew up in Montclair, New Jersey and later received her degree from Russell Sage College in Troy, NY.

Carol started her professional life in the 40's as a clothing designer in New York and was one of the first to design maternity clothing. However, what called to her most fervently were the arts.

She had a love of the stage. In 1966, she became one of the founders of the Arizona Civic Theater, which in subsequent years became the Arizona Theater Company. If her love was for the theater, her passion was the ballet; she was credited as being one of the three saviors of Ballet Arizona some years ago when it was facing collapse.

Always active in the arts, Carol was the author of play called Katsina, which was based on Hopi traditions. It won the national "L. Arnold Weissberger award for excellence in playwriting and the Quarterly Review of Literature's International Poetry Competition; there were more than a dozen others. Among them were The Governor's Award from The Arizona State Commission on the Arts as Philanthropist of the Year while Phoenix's Childsplay created The Carol Whiteman Conservatory. Carol was a published poet - as was her father - and the University of Arizona Poetry Center honored her by creating the Carol D Whiteman Wall of Poets. She was a member of Tucson Community Center Commission from 1969 to 1972- and was one of the commissioners responsible for the building of the complex downtown.

For all her achievements, her most passionate energies were invested into her family in which she took great pride. She is succeeded by three children, David, Barbara and Fred; seven grandchildren and eight great-grandchildren and her very best friend, a street cat named Hoover with whom she has shared many secret; he particularly enjoyed readings from a book of Carol's poetry called Catnip.

Due to the virus, a memorial service will not be held and donations should be made to Arizona Ballet or to Childsplay.

Some years ago, Carol was knighted "Queen of the Arts," by the Phoenix New Times. She was indeed a champion of the arts.

And the art of life.


To plant trees in memory, please visit our Sympathy Store.
Published by Arizona Daily Star on Feb. 21, 2021.
MEMORIAL EVENTS
No memorial events are currently scheduled.
To offer your sympathy during this difficult time, you can now have memorial trees planted in a National Forest in memory of your loved one.
GUEST BOOK
10 Entries
Carol was a beloved friend that I was fortunate to know her as well as her deceased spouse, Jack Whiteman for many, many years. They were true soulmates. Carol was a beautiful, multi-talented lady that enjoyed the beautiful Arizona sunsets, the mountains, the flowers and birds as well as her beloved cat, Hoover. She was blessed with a wonderful fulfilling life of adventure and travel throughout the world. A life well lived. Both Carol and Jack will always remain in my heart and memories.
Eleanor Ramirez
Friend
March 6, 2021
We are so sorry to hear of Carol's passing ....truly a beautiful person inside and out...praying for the family of peace and comfort... she will be missed by many.
Dennis @ Rosanna Holm
Friend
February 22, 2021
Fred and family --Your wonderful mother lived quite a life filled with so many wonderful accomplishments and was a GRAND lady. Please accept sincere condolences and wishes that your mother's life be a continued blessing. Bruce Ash Tucson,AZ
Bruce Ash
February 22, 2021
Arizona Theatre Company and all of us who came after owe Carol such a huge debt of gratitude for what she did. The theatre wouldn't be here for 50-plus years without Carol's dedication and commitment in those early years and I thank her for that. She and I because friends soon after I arrived at ATC in 1995 and I cherished that friendship. This photo definitely captures Carol's joy of life. I know that her spirit will remain in Arizona Theatre Company forever. She will never be forgotten.
Jessica Andrews
Friend
February 21, 2021
To Carol DuVal's fine family: I recall the excitement when Dr. DuVal and his family came to Tucson from OKC. We were close neighbors in El Encanto and David and I were classmates at THS. Many fine times were had at the DuVal home and I will always remember the road trip Dave & I took to OKC, where I was introduced to his friends and High School haunts. I could not find a way to contact Dave, Barbara or Fred, so this is the best I can do for now. Carol was family friend, a 2nd Mom and a real force in Tucson society. Even though life took her up the road to Phoenix, she is dearly missed by many people here in Tucson. Best wishes and condolences to you all. Al Chesser. THS Class of 1965 Neighborhood kid! (520) 327-8071
Al Chesser
February 21, 2021
Carol will be so missed by her neighbors in the Biltmore Villas. I loved seeing her at dusk enjoying our beautiful sunsets. She would smile and say how lucky we were to see the beautiful sky. I so enjoyed reading about her life and learning of all the wonderful things she created. Thank you for sharing those memories with us. Sending you love and joy.
Zodie Weaver
February 21, 2021
I asked her if I could help her to her car after a Childsplay board meeting and she said, what do you mean, do you think I can't do it myself. Then she hopped over a curb with both feet. She was not a young woman at the time. So full of personality. I just loved her.
Chris Ewing
Friend
February 21, 2021
What a wonderful woman, accomplished in so many dimensions of life. Thanks for
a beautifully written obit.
terrence bracy
February 21, 2021
I adored your mom many years ago meeting her delightful and engaging personality during High School and College years through my friendship with Fred. Beautiful person that will be greatly missed by her beloved family and friends. Blessed lady with many talents and engaging personality. Prayers of healing to family. Your mom will be a shining star in the sky and always be remembered and forever missed!
Jennifer Matteson
February 21, 2021
Carol was one in a million,! Fun! creative! Community leader and Arts Advocate par excellence and wonderful friend! She leaves the world and particularly Phx. and The State a far better place than when she entered it! Thanks for the memories my dear! Happy Trails! Hugs galore TNC
tom chapman
Friend
February 18, 2021