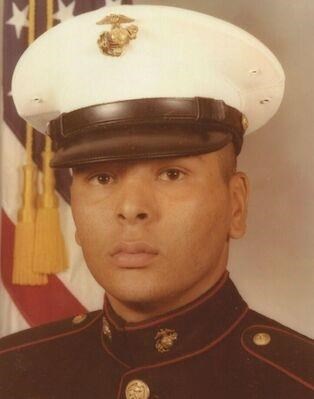 Frank Ernest Romero, 58, died unexpectedly February 11, 2021 in Tucson following surgery. Left to mourn is the love of his life, Candee Condray, beloved wife and best friend for 25 years, business partner and collaborator in all things festive.

He loved strongly and stalwartly, not necessarily in this order: his family; the U.S. Marine Corps; his country, his dogs Logan, Billie and Wick (all over indulged and under trained, characteristics he never acknowledged;) beaches; the Pittsburgh Steelers; Broadway musicals; Elvis; and all kinds of music 24/7. He relished sharp shoes and watches and, something of a dandy, color-coordinated them daily with his clothes. His dancing was more enthusiastic than skillful. He kept his vehicles tricked out and shiny. He liked to support local painters and other artists and everybody he met was his instant best friend. He filled every room and into the horizon with joy and laughter. He ended almost every phone conversation with friends and family with, "Love you." Frank loved life and lived it with gusto.

He treasured a cup of freshly ground coffee every morning, appreciated a big T-bone steak and chocolate cake, but thought salad was overrated. He preferred shrimp tacos but never met a taco of any kind he didn't like. He had a verdant green thumb and used it in his home garden and his small business Greenjeans Landscaping. He was a world-class gift giver, everything from homemade salsa (which Candee made with chili peppers he grew) to lavish gifts carefully chosen. He especially liked choosing gifts for his great-granddaughter Athena Flowers, for his wife and for himself.

Frank was a proud graduate of Pima Community College but proudest of all for his twelve years' active duty with the U.S. Marine Corps. He followed a family tradition of military service: father, two brothers and currently his grandson Nikolas Romero in the U.S. Airforce. After Camp Lejeune in North Carolina, Frank served in multiple locations: Hawaii, Philippines, South Africa, Japan and Afghanistan. While stationed in Australia, he claimed to be part of a bar fight so spectacular it resulted in the expulsion of the entire Fifth Fleet from that country.

Generous even into death, Frank was a designated organ donor. He would want people to remember him by voting in every election and respecting and honoring all men and women serving in the armed forces (except perhaps the Navy.)

A memorial service with military honors will be held at a later date, to be announced. Donations in his honor are recommended for Tucson's Youth on Their Own, Pima County Humane Society, or other charities helping youth and animals. Arrangements by BRING'S BROADWAY CHAPEL.

To plant trees in memory, please visit our Sympathy Store.
Published by Arizona Daily Star on Feb. 21, 2021.
MEMORIAL EVENTS
No memorial events are currently scheduled.
To offer your sympathy during this difficult time, you can now have memorial trees planted in a National Forest in memory of your loved one.
Funeral services provided by:
Bring's Broadway Chapel
GUEST BOOK
8 Entries
This is one of the most well written obits I've seen, and it painted a wonderful picture of a man who loved life, and who was well loved by all around him. We don't have enough of that in our world, kudos to his family for writing so much good prose for this wonderful man.
Don C
February 24, 2021
I have never met anyone like Frank. He was thoughtful, generous, loved life like no other, and that laugh of his was contagious. Frank was loved by many and will be missed by us all. Until we met again. *secret hand shake ((hug))* Love you and stay safe carnalito.
Maria
February 22, 2021
Heartbreaking to loose Frank ,totally unbelievable.Heartfelt condolence and deepest sympathies with family & friends.May the departed soul rest in peace hereafter.Ameen! He will be missed always.
Ismat K Wazir
February 21, 2021
Our world has shattered into a million pieces & we will never be able to put it back together without the consant presence of our dear friend & Tony´s brother from another mother. Our deepest condolences to Candee, Julie & the entire family. We will meet again Compa-dray & the good times will continue, until then we will remember you everytime we look at our beautiful backyard. We love you.
Tony & Mari
February 21, 2021
Semper Fi Marine! And you're right, we only like Navy on two occasions: 1) When we are at war and 2) When they play Army
Fellow Marine
February 21, 2021
My heartfelt condolences go out to Julia, JoAnn, Robert Sr & Jr, Alex, Angela, Stephanie, Destiny, Nickolas and his extended family. He was quite a guy. May he rest in peace. God Bless. Ralph and Family
Ralph From Tucson
February 21, 2021
Semper Fi, Marine. Thanks for your service.
F
February 21, 2021
My first memory of Frank is the day he started at TPC. He was so kind and had such a huge laugh! He gave me a silly nick name that he called me up to the last time I saw him. Frank will be missed and I will think of him, often. Blessings to his family, and my sincerest condolences.
Shannon
February 20, 2021