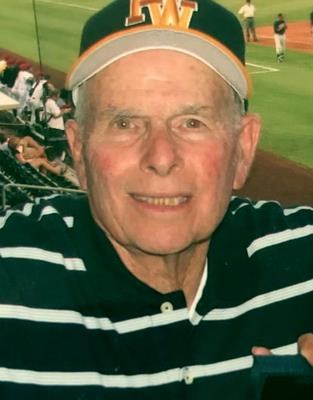 87, passed peacefully surrounded by his family on October 22, 2019. He was born on May 10, 1932 in Chicago, IL. He moved to Tucson in 1944. At age 12, his uncles Bill and Mike Gleeson taught him the art of masonry which John continued until he was 72 years old. John's work can be seen all around Tucson including the Tucson Convention Center and on the Universuty of Arizona campus. He also used his craft in the many waterfalls, patios, block walls and room additions he built throughout his life. He was a graduate of Amphitheater High School in 1949 and enlisted and served in the U.S. Navy as a telegraphic operator from 1951- 1955. He enrolled at the University of Arizona and earned his B.A. and M.A. in education. He remained an avid and loyal Wildcat sports fan until the end. John began his 32 year teaching and coaching career in 1960 at Salpointe Catholic High School. He coached both the J.V. baseball and basketball teams. He became the Varsity Cross-Country coach in 1961 and the Varsity Baseball coach in 1963. Being a brick mason, John re-built the varsity baseball field and built the first masonry high school baseball dugouts in Tucson and probably Arizona. In 1969, The Salpointe Administration named the Varsity baseball field "Gleeson Field." Later that year, John was hired at Flowing Wells High School as a teacher and baseball coach. He also built the baseball dugouts while at Flowing Wells High School. His 1977 varsity baseball team was state runner-ups and in 1983 his team won the first and only baseball championship in school history. He retired from teaching in 1994. John is also a member of both the Salpointe and Flowing Wells High Schools Hall of Fame. He was inducted into the Old Pueblo Cross-Country Hall of Fame for his work at Salpointe Catholic. In 1997, he was inducted into the Pima County Sports Hall of Fame. In 1999, the Flowing Wells governing board named the Varsity baseball field "John M. Gleeson Field" making John the first person in Tucson's sports history to have two sports venues named in his honor. In 2005, he was inducted into the Arizona Coaches Association's Hall of Fame and in 2007 he was inducted into the Arizona Baseball Coaches Associations Hall of Fame. He was dedicated to his role as president of the Pima County Sports Hall of Fame from 2006 - 2016. Through it all, he cruised through life with his good old buddy, "blue bird" which was his cherished 1966 Chevy pick-up. John is survived by his wife of 50 years, Eva; daughter, Michele (David) BeMiller; son, Jim Gleeson; daughter, Janelle Gleeson; two granddaughters, Cailin and Alyssa; John leaves a legacy of love, dedication and commitment to his family, friends, students, coaches, colleagues and all endevers throughout his life. As sports writer Greg Hanson stated on Tuesday after his passing, "he was one heck of a good man." A Service will be held at Sacred Heart Church on Saturday, November 9, 2019 at 10:00 a.m.


Published by Arizona Daily Star from Oct. 25 to Oct. 27, 2019.
To plant trees in memory, please visit the Sympathy Store.
MEMORIAL EVENTS
Nov
9
Service
10:00a.m.
Sacred Heart Church
AZ
Funeral services provided by:
Desert Rose Heather Cremation & Burial
MAKE A DONATION
MEMORIES & CONDOLENCES
18 Entries
He was a great person not only as a teacher and as the baseball coach on and off the field he was a great person
Edward Schwartz
November 24, 2020
I am very sad to hear about the passing of Mr. Gleeson. He was the kindest man. He was a long time customer of mine at Walgreens and I enjoyed hearing his stories. He will be greatly missed! My condolences to his family.
Traci P.
February 6, 2020
It is with respect and kindness that the Coopers, Kelly and Ellen, students of this kind hearted man say.... Thank You! You always show us you cared. From our hearts... THANK YOU MR. Gleeson for all your dedication and devotion you showed to each and everyone of your students. Rest In Peace. Always, The Coopers
Kelly & Ellen Cooper
November 24, 2019
John thank you for a life of service to the youth of Tucson. Also for your commitment to improving high school basketball officiating in Tucson, as the Basketball Officials leader for many years. You were a wonderful friend and teacher. You will be missed.
J Berry Roberts
November 8, 2019
Gleeson's- Wishing you all peace and comfort. Blessed to know Dave has an old buddy to talk sports with in Heaven now. Our deepest sympathies from the Snyder family.
staci snyder
November 8, 2019
I will never forget John's kindness. Sending love and prayers to his family and friends. He will he missed.
Eva Montijo Guzman
October 30, 2019
Sacred Heart: Girl's volleyball team,1958, coached by a young Mr. Gleason. My sister Bridget and I were in 6th and 7th grade. First time we were introduced to girl's team sports. He would pile a bunch of us in his car to drop us at our homes after practice. Don't remember if we won our lost, but I remember him!
Kathleen Sullivan 66
October 29, 2019
Coach Gleeson, You were an excellent Baseball coach and a supportive human being. It was a pleasure knowing you Sir! Dr. Robert Mejias, Ph.D.
October 28, 2019
I had Mr. Gleason as a teacher when I attended Salpointe. He always cared for the students and I respected him very much. He definitely had a positive influence on our community. Sending prayers to his family and friends at this difficult time.
Freddie Kalil Schutten
October 28, 2019
Coach, very sad of your passing and my condolences to your entire family. I was always able to ask advice or just talk to John when attending Salpointe. What a gift to we had in Coach Gleeson. May you Rest In Peace with OUR LORD.

Frank Davis
Salpointe '68
October 28, 2019
The Salpointe Catholic High School community extends deepest sympathy to the Gleeson family. You are in our prayers at this difficult time.
Salpointe Catholic High School
October 28, 2019
My earliest memories of Johnny were stories my Dad, Rudy Castro, would tell. They were stories about competition, respect, friendships, the Badgers vs the Panthers and the UA. Their lives crossed many times on the Tucson baseball fields and the basketball courts as athletes, coaches and competitors but especially how the Badgers beat the cowboys at Amphi. We're going to miss all these old codgers who have passed...they made us proud to know them and be able to share some memories of the good ol' days.
Tom & Linda Castro-Spencer
October 27, 2019
A good friend. Rest in peace, John.

Marlene Kotchou
October 27, 2019
Coach, I am saddened to hear of your passing. Your influence to thousands of boys/men & coaches is unparalleled. I had the pleasure of meeting you through my mentor Mark Lumley at Flowing Wells. Your knowledge & love of the game & young athletes was amazing. I thank you for all the support you gave me through my Flowing Wells career. You followed our State Championship runs closely. I thank you for all your tips & insights that led to our successes. You & Mark Lumley made Flowing Wells Softball so special to me. I also thank you for my nomination & inclusion to the Pima County Sports Hall of Fame. You were the shaker & mover that helped so many during your tenure. May you Rest In Peace Coach, the world has lost a genuine caretaker. May God Bless your Soul & Family always. Forever Grateful, Forever Proud to have been influenced by you. ✝❤
Armando Quiroz
October 27, 2019
I never had John as a teacher or a coach at school. But just knowing John, you learned life lessons. He is one of the nicest men I have ever known. Godspeed John!
John Meech
October 27, 2019
I'm saddened to read about Coach Gleeson's passing.His Obituary speaks volumes about a man who had the deepest respect and admiration of those who had the good fortune to be a part of John's life.His Legacy will always include the richness of memories he leaves behind for all of us.He will be missed.
Ted Sorich
October 26, 2019
Eva and family...
Both Jack and I were saddened to hear of John's passing...he meant so much to so many...he was truly a one of a kind...I know the Hart brothers and our dad are having a wonderful reunion with John....he was much loved by our family.
Joni Jo Wester-Edgar. Jack Wester
October 26, 2019
I had the privilege of being a colleague of John's at Flowing Wells High School for many years. He was an amazing man. Caring, compassionate and loyal are words that come to mind when describing John. May God comfort Eva and the rest of the family at this time. You will be missed my friend.
Lee Engbretson
October 26, 2019
Showing 1 - 18 of 18 results