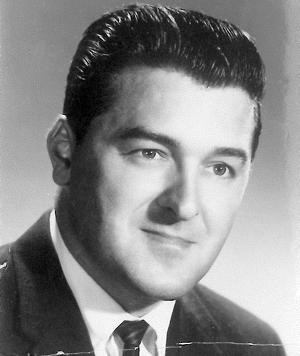 BORN
1931
DIED
2014
FUNERAL HOME
Adair Funeral Homes - Avalon Chapel
8090 North Northern Avenue
Oro Valley, AZ
John E. Makkai passed in Tucson, AZ on October 1, 2014. He was born April 21, 1931 in Carteret, NJ and attended Carteret High School. John served in the United States Air Force from 1951 to 1955, with the Headquarters 43rd Bomb Wing based out of Davis-Monthan AFB. He arrived in Tucson in 1952 and remained after his honorable discharge as a Staff Sergeant. John was employed as City Manager for Midway Drive-In Theaters and later worked in the insurance industry until his retirement. He was the Founder of American Family Day, Arizona's 14th officially recognized state holiday, which is celebrated on the first Sunday in August. He was a Founding Director of the Boys Clubs of America in Tucson, a former Grand Knight of Tucson Council 1200 of the Knights of Columbus and was parish chairman for the Diocese of Tucson's Annual Bishops Appeal Campaign for over 40 years. Preceded in death by his parents, John M. Makkai and Helen Fetyko Makkai; brother, Alex Makkai and sister, Shirley Somerville. He is survived by children, John E. Jr. (La Quinta, CA), Mary (Columbus, OH), Elizabeth (Washington, DC) and Susan (Louisville, CO) Makkai; brother, Albert (Maureen) Makkay (Centerville, MA); three grandchildren and five nieces and nephews. Services will be held on Tuesday, October 7, 2014 at 1:00 p.m., at St. Elizabeth Ann Seton Catholic Church, with a reception to follow. In lieu of flowers, please mark the First Sunday of August annually in your calendars to celebrate American Family Day in John's honor. Arrangements by ADAIR FUNERAL HOMES, Avalon Chapel.

Published by Arizona Daily Star on Oct. 5, 2014.
To plant trees in memory, please visit the Sympathy Store.
MEMORIAL EVENTS
Oct
7
Visitation
St. Elizabeth Ann Seton Catholic Church
AZ
Oct
7
Service
1:00p.m.
St. Elizabeth Ann Seton Catholic Church
AZ
Funeral services provided by:
Adair Funeral Homes - Avalon Chapel
MAKE A DONATION
MEMORIES & CONDOLENCES
12 Entries
I miss you dad, more then I ever thought I would. You'd love hearing about my job dad. I'm pretty sure you had something to do with my getting it! It involves planes Pop! I love you
Happy birthday!
Mary Number one
Daughter
April 19, 2019
Mary we are saddened by the loss of your father, we will continue to pray for you & your family. There is nothing worse than loosing a parent. Bless you all!
PJ & Jo Sherrow
October 7, 2014
Thank you Dad for your never ending giving heart, your loyalty, and your caring spirit. You taught me a lot just by those great qualities and being a great family man. You always had a way of putting smiles on people's faces. You will truly be missed. I am at peace knowing you are no longer suffering. May God Bless you Super Dad and everyday is American Family Day in my eyes. xoxo
Super Babe
October 6, 2014
John did so much for St. Elizabeth Ann Seton Parish. He will not be forgotten. Thanks, John, for all your sacrifices.
Janice Marshall
October 6, 2014
Dear Cousins,
Thinking of you all.
Love, Theresa
October 5, 2014
The first Sunday in August will never be the same in my book. What a special tribute. You're in my prayers. Love you guys.
Monique
October 5, 2014
You have won the race, dear Friend. Thanks for the honor of sharing one of your last Eucharists. Love and prayers to your family... (Fr) Charles B. Towner
Charles B. Towner
October 5, 2014
John was a great man and very catholic. We last saw him at our 50th anniversary. We all will miss him.
Joe & Kathy Conroy
October 5, 2014
Our thoughts and prayers are with you and your family.
The Butlers
October 5, 2014
I am a sister of Maureen Makkay. I have known John since 1962. He was always a gentleman and great supporter of the Knights of Columbus. I will miss him and his phone calls.
May he rest in peace.
Karen Pesci
karen Pesci
October 5, 2014
Mary keeping you and your family in my thoughts and prayers. Cherish all the good times and keep his memory alive in your heart forever. Thinking of you.
Sandy Mckibben
October 5, 2014
May you soar with the angels and my mom and dad.
Tammy Gardner
October 5, 2014
Showing 1 - 12 of 12 results