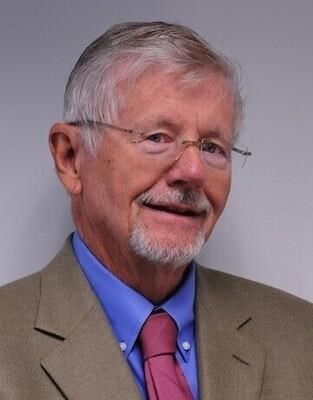 passed away peacefully May 30, 2020, surrounded by his wife and children after a short bout with lung cancer.

Born in San Diego, to Sheridan Norris and Edwina Carol Hegland, he was the youngest of two children.

He received a BA from Stanford University and a JD from Berkeley. He was very proud to have spent a summer in Albany, Georgia working in the civil rights movement. After graduation he worked for Rural Legal Services.

In l970 he became a faculty member at the University of Arizona law School starting in the clinical program and later teaching contacts. He was the favorite law professor of many students. He retired in 2008 but, continued to teach Law and Humanities. He helped create the High School Teaching program, the Juvenile Detention program and Tucson Veterans Court.

Kenney married his wife, Barbara Sattler in l982. Both lawyers, they shared a love of reading and writing and watching British and Irish mysteries.

Along with colleague Andy Silverman he wrote and produced videos for high-school student about current issues. He was a prolific legal writer his works known for their readability and humor. On a dare from his wife, he wrote an award-winning novel, Law School Chronicles. His second novel, Perez and O'Grady, Lawyers, co-written with his wife, will soon be available.

Kenney was an awesome father and husband, kind, generous and even in his last days never lost his sense of humor.

In lieu of flowers contributions can be made to Southern Arizona Legal Aide, Step Up to Justice or the Kenney F. Hegland Scholarship, c/o University of Arizona, James E. Rogers College of Law. Arrangements by ADAIR FUNERAL HOMES, Dodge Chapel.


To plant trees in memory, please visit our Sympathy Store.
Published by Arizona Daily Star on Jun. 14, 2020.
MEMORIAL EVENTS
No memorial events are currently scheduled.
To offer your sympathy during this difficult time, you can now have memorial trees planted in a National Forest in memory of your loved one.
Funeral services provided by:
Adair Funeral Homes - Dodge Chapel
GUEST BOOK
9 Entries
I am so sorry to hear about Ken's passing. I remember how much he loved life, his family, his humor, and his desire to make the world a better place to live in. I remember how involved Ken and you were in education, volunteering in my room when Ben was in kindergarten, and how you still came back to volunteer after all your children were out of school. Those who knew Ken were blessed to have known him. My prayers and thoughts are with you, Ben and your family.
Sincerely,
Judy
Judy Ruiz
Teacher
August 21, 2020
Thank you kenny hegland for showing me there is a place in law and life for those that think a little differently and exposing the rest to some seriously wise perspectives. I know I probably wasn't one you remembered, and that's ok, you remain one of my few heroes. Turtles all the way down sir.
Ross Henderson
Student
July 8, 2020
Barbara and family,
You have my deepest sympathy on the loss of Kenney. It was too sudden. Even though he had been retired for years I always expected an email from him--and often got one--asking for this or that article. I always looked forward to hearing from him with his unique brand of humor and touch of irreverence. I think he'd have liked a party with everyone telling stories and sharing memories and 'himself' taking it all in from the corner of the room. Blame the pandemic for that. My thoughts are with you Barbara. Kenney will be missed by many. Maureen Garmon
Maureen Garmon
Coworker
June 23, 2020
I enjoyed visiting with Kenney and Barbara Saturday mornings at Beyond Bread on Campbell. Kenney would always ask what I was reading and give me some recommendations of books I might like. He had a wry sense of humor and once told me when I retired to be sure to save some errands for the next day in case I needed something else to do. Kenney will be greatly missed.
Janis Sherick
June 17, 2020
My last semester of law school was in the Spring of 1978. I took Prof. Helgand's class on "Humanities & Law". In that class I saw his sense of humor and learned that he was a man of integrity and compassion. More recently I served with him on the Pima County Bar Association Board of Directors and saw his advocacy for a legal profession that lived up to its ideals of justice for all, especially those who are vulnerable. His passion for justice and his sense of humor were a delightful combination that I will certainly miss. His vision of being a lawyer who supports the highest ideals of our legal system I shall not forget.
Brian Clymer
Student
June 17, 2020
Perhaps That's All for now Folks, but from the courthouse social activism I remember during 70s-80s it was a helluva lot indeed. Wishing peace to Barb and family.
Phillip Woolever
Coworker
June 16, 2020
During my final semester in law school, Kenny Heglund was my professor for his wonderful Law and Humanities course. On January 28, 1986, I arrived at class shortly after the Challenger spaceship had exploded. Whatever carefully planned lesson he had for that day went out the window, and we instead talked about life, death, uncertainty, and the bravery of the astronauts and teacher who ventured into space. It was one of the most meaningful, and humane, conversations in which I participated during law school. Prof. Heglund had an excellent legal mind, but his empathy and humanity made made him an exceptional teacher and human being. My sincere condolences to the Heglund/Sattler family.
Barbara Ging Gray
Student
June 15, 2020
I was deeply saddened to learn of Kenney's passing. I knew Kenney when I worked at the U of A Law School & then as we worked together when he was Acting Dean. I so respected his knowledge, compassion, & thoughtfulness. His academic writings reflected a sense of humor that made even tough legal issues relevant & understandable to those outside the law. I just reread "Quibbles" from the Texas Law Review &
there is no finer example. I am grateful to have known him. To Barb and all his family, I extend my most sincere condolences. Kenney was a very special man.
Bobbi Miller
Friend
June 15, 2020
I was saddened to learn of Kenny's death. I met him many years ago when our sons were friends in elementary school. I will always remember him as a kind man with a great sense of humor. During the years I have met former law students at the U of A that stated Kenny was one of their favorite professors. My sympathies to Ken's family.
May he rest in peace. Crissy Ash
Crissy Ash
Friend
June 14, 2020