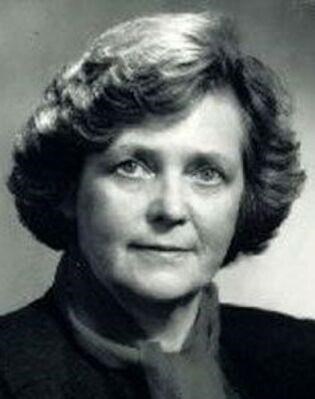 Martha passed away peacefully at the age of 89, in Tucson, Arizona on June 30th, 2021. She grew up in Adrian, Michigan and later in life called Ann Arbor home. Always a big fan of the University of Michigan, she would make a point to take family and friends to "The Big House" for a football game. One of her absolute favorite places was The Grand Hotel on Mackinac Island, MI.

Martha was known as a "tough lady" in her professional life. She had a long and distinguished career in economics that included Commissioner of the Financial Institutions Bureau for the State of Michigan, Professor of Finance at Central Michigan University, John M. Olin, Distinguished Fellow at the University of Arizona and various directorships. Her most notable position was the appointment as a Governor of the Federal Reserve by President Ronald Regan.

She was preceded in death by her brother, Courtland and nephew, Bradford. She is survived by her sister, Susan; sister-in-law, Catherine; niece, Janice Meyer (Bill); niece, Christine Kharrazi (Navid); great-nephew, Alec and great-niece, Madeline.

A graveside service will be held at Oakwood Cemetery in Adrian, MI for family and close friends.


Published by Arizona Daily Star on Jul. 18, 2021.
To plant trees in memory, please visit the Sympathy Store.
MEMORIAL EVENTS
To offer your sympathy during this difficult time, you can now have memorial trees planted in a National Forest in memory of your loved one.
Funeral services provided by:
East Lawn Palms Mortuary
MAKE A DONATION
MEMORIES & CONDOLENCES
4 Entries
I am so sad to read this ... I have tried to reach both Martha and Sue for over 2 years . I always loved being together with these two brilliant and sweet sisters ! How can I reach Sue ?? Is she in Tucson ? With Covid , we have lost touch with our dearest friends . I pray Sue is safe . Martha will be forever admired , dearly loved and missed . Our prayers to her beloved family . She was so devoted to her family .
Linda Solomon
September 22, 2021
Oh My I have missed seeing Martha and Sue in the past few years. What a fun and interesting time we had with Martha and Sue. Martha was always so generous too at those dinners at the Arizona Inn. She will never be forgotten. A brilliant lady has left this physical earth but her generosity and legacy will live on forever.
Kathryn B Snodgrass
Friend
July 18, 2021
My condolences to Martha´s family, especially Susan. I got to know both ladies as their dental hygienist and enjoyed the outside the dental office. Martha´s zest for life was remarkable. We enjoyed our love of classic cars-the Lyon. I always learned something from Martha. Rest In Peace. I also would like to reach out to Susan.
Debra Rogers
Friend
July 16, 2021
So sorry to hear of Martha´s passing. I was very fond of her and enjoyed some nice times together in Ann Arbor. My Grandmother Beatrice Clement loved having Martha and Susan for summer visits at the farm with her. Would love to have details of the burial in Adrian.
Ellen J. Clement
July 16, 2021
Showing 1 - 4 of 4 results