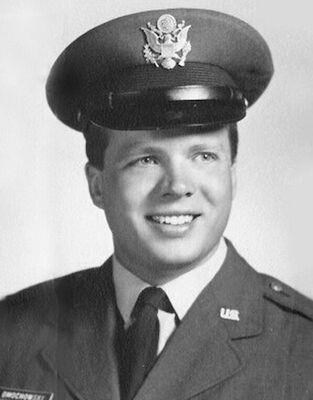 76, of Tucson, AZ, passed away on Thursday, April 29, 2021, with his wife Pat by his side. Michael was preceded in death by his parents, Ida Grace Dmochowski and Michael John Dmochowski of Williamston, MI. He is survived by his loving wife and partner of 27 years, Pat Dmochowski, of Tucson, AZ; sister, Ida Jo Mahaney of Perry, MI; brother, John Dmochowski of Challis, ID; brother, Charles Dmochowski of Minnetonka, MN; daughter, Laura Primak and son-in-law, Dan of Lakewood, CO, and their children, Becca, Julia, Savannah and John; son, Michael Dmochowski and daughter-in-law, Lisa of Roanoke, VA, and their children, Emma, Eric, and Eliza; stepdaughter, Shannon Hines of Portland, OR and many grand dogs. Mike was born in Lansing, MI, in 1944 and grew up in Williamston, MI. He attended and graduated from Michigan State University and was always proud to be a Spartan. After graduation he joined the Air Force and proudly served his country for 23 years, retiring as a Lt. Colonel. Mike was a devoted, loving father, who as a single dad raised Michael and Laura and instilled in them a love of travel, camping, and a great sense of humor! Mike was a devoted husband to Pat, and they went on many adventures together, even buying an RV and traveling around the country for a couple of years. They took the position of camp hosts at the RV Park in Davis-Monthan Air Force Base in Tucson, AZ, in the early 2000's, and liked Tucson so much that they settled there not long after. He loved his seven grandchildren, and asked them to refer to him as "Grumpy", showcasing his unique sense of humor. He was committed to gathering the family together every summer in Michigan, even one year in Hawaii, and would take such pride in watching everyone laugh, bond, and share stories. Mike was a friend to many, and was a master story teller himself, often embellishing those stories (to the amusement of his family). He loved to mentor and imparted invaluable life lessons that are embraced and will be passed on to future generations. He leaves a wonderful, indelible legacy of love, kindness, and memories to his family and those who were blessed to know him. Heaven is brighter and far more entertaining with his amazing soul. The family would like to thank the staff of nurses, doctors and workers at Tucson Medical Center, the Center at Tucson, and Cornerstone Hospital who cared for Mike over the last five months. In lieu of flowers, please consider donating to two of Mike's favorite charities in his name: Good Samaritan Family Services in Ellsworth, MI (www.thegoodsam.com) or Gospel Rescue Mission in Tucson, AZ (www.grmtucson.com). A memorial service will be planned at a later date. Arrangements by BRING'S BROADWAY CHAPEL.

To plant trees in memory, please visit our Sympathy Store.
Published by Arizona Daily Star on May 9, 2021.
MEMORIAL EVENTS
No memorial events are currently scheduled.
To offer your sympathy during this difficult time, you can now have memorial trees planted in a National Forest in memory of your loved one.
Funeral services provided by:
Bring's Broadway Chapel
MAKE A DONATION
MEMORIES & CONDOLENCES
10 Entries
My husband and I were stationed in Korea with Mike and his two wonderful kids, Laura and little Mike. We were involved in church, scouting, and sports together. He was a great dad, friend to many, an all around good guy who would do anything for you. He will be sorely missed by all who knew him. Many prayers for his family at this time of deep grief.
Susan Huff
May 16, 2021
Mike was a wonderful friend to me in high school and beyond. I am so sorry to hear of his untimely passing. To all the family members: please accept the Honey family's sincere condolences.
Maureen Honey
Friend
May 7, 2021
Mike was a good friend to me...since grade 5. He was always keeping people connected, especially his Williamstown classmates. Will treasure his memory, always, and hope that he and my beloved guy, Doug Miller, are having a laugh over something, wherever they are! Both had a great sense of humor and fun! Suzy Miller
Suzy Miller
Friend
May 6, 2021
It was my good fortune to call Mike friend and to share many wonderful high school memories and the true happy days of our youth.
Richard Dana
Friend
May 4, 2021
You have a wonderful sister! I’m sorry for all of your family. Cherish those memories!
Bonnie Baker
Friend
May 3, 2021
Mike and I were good friends in high school. Took two years of French and always sat by each other. I remember his sense of humor and good nature.
Marie Smith Horaney
Friend
May 3, 2021
I enjoyed getting to know Mike over the years. I am truly grateful for the love he showed for my daughter (his daughter-in-law) and his grandchildren who were also my grandchildren. I am very thankful for the adventures he shared with them and for raising a special son to be a loving husband and father.
Bonnie Grubb
Friend
May 2, 2021
God, family, country, patriot, noble, humorous,sincere, creative, loyal, clever, well traveled and well though about, dedicated to those he served, happy, brave, clean and reverent, like a rock: Brother. Reporting for duty in higher realms.
John Dmochowski
Brother
May 2, 2021
Growing up we lived far away from the rest of our relatives. So it was very rare that we had family visitors. Yet I do remember the time when Mike came over for my sixth birthday. I remember welcoming him with silly string, having a lot of laughs, and enjoying a fireworks show that day. This is probably why he is one of my favorite uncles.
Blake Dmochowski
Family
May 2, 2021
Mr. Dmo, as we called him, was a tremendous man. In Junior HS, his daughter, Laura, and I were best friends, and many a night was spent in relentlessly giggling sleepovers either at Mr. Dmo's house or mine. Lord knows how he put up with all the girl giggles all through the night. He was always kind and funny, with a larger-than-life personality. That continued to show over the years as I've enjoyed seeing him with his huge, wonderful family. He will be sorely missed but has obviously left a legacy of love that will continue on for generations. God bless this family.
Stephanie (Huff) Grant
Friend
May 2, 2021
Showing 1 - 10 of 10 results