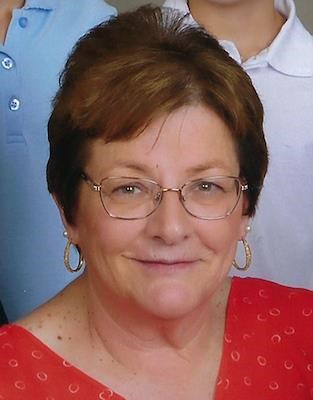 age 66, left this world and gained her angel wings on August 9, 2020. Regina was born on September 14, 1953 as Regina Pugh in Garden City Michigan moving to Tucson when she was 14. She is preceded in death by her daughter, Joanna R. Chester (Nussman); father, James W. Pugh and mother, Martha A. Pugh (Gean). She is survived by her husband of 48 years, James R. "Jim" Nussman; daughters, Jessica R. Howell (Richard), Justina R. Trejo (Robert) and Julia Nussman; brother, Perry Pugh (Mary) and son-in-law, Kevin Chester (Tricia).

Gina graduated from Palo Verde High School. Jim and Gina meet at Junior Achievement of Tucson, marrying on June 10, 1972. They moved to the Flowing Wells Community in 1978, raising their four daughters in the Flowing Wells School District.

She worked for the district from 1992-2002 eventually leaving to work for the UofA as a Business Manger before retiring in 2014.

She spent her retirement years spending time with her family and grandchildren, attending all their activities and helping with any of their projects. She was active in her church family of St. Mark's United Methodist Church. Gina volunteered with the Flowing Wells Continental Little League where five out of eight of her grandchildren played softball and baseball. She started volunteering in the Flowing Wells School District in 1985, continuing for 35 years. You would often find her making or putting up bulletin boards, building sets for musicals, sewing costumes or set parts, laminating or grading papers. Anything a teacher or student needed she was there to help with a kind smile on her face.

Gina touched so many lives and will be deeply missed by all that knew and loved her.

To plant trees in memory, please visit our Sympathy Store.
Published by Arizona Daily Star on Aug. 16, 2020.
MEMORIAL EVENTS
No memorial events are currently scheduled.
To offer your sympathy during this difficult time, you can now have memorial trees planted in a National Forest in memory of your loved one.
Funeral services provided by:
Marana Mortuary & Cemetery
MAKE A DONATION
MEMORIES & CONDOLENCES
4 Entries
We Knew Gina and her beautiful family from St. Marks UMC. We watched her kids grow up and have their own children. A wonderful thing to see. Gina's smile and good humor and willingness to help any way that she could will be greatly missed.
Gloria Hoffman
Friend
August 22, 2020
This is an excerpt of an email I sent to the staff at the Andrew Weil Center for Integrative Medicine when we heard the news... The people who worked with Gina encouraged me to share this message with the family.

"On a personal note, I always admired Gina. She worked very hard, she was incredibly ethical, and she always strived to do what was fair and right for all.

She was highly dedicated to the success of the Center, coming back to work “part-time” after she retired and staying until she felt the Center was in a good place and in good hands. She prided herself on reconciling to the penny and making sure everything was done well and done right the first time.

She was always willing to do what had to be done to make sure the Center functioned well. She saw us through some difficult times and lean years. One year, she ran the business office by herself with the help of two part-time student workers. That was not a task anyone else I know could have done.

She didn’t like a lot of attention or focus on her, but she let her work and conduct speak for itself. In her role, it’s not always easy to see or share examples of her humanity, but I lost count of the large and small kindnesses she granted to other people, the special favors she did that only a few people knew about, or the ways she helped people that they may not even be aware of. But I could always count on her to do the right thing and find a means to do it the right way. Not as easy as it sounds.

I’m personally indebted to her for all she taught me about the University systems and rules. How to ask the right questions and when to stand up for the Center in the morass of conflicting rules, policies, forms and figures.

I say she was a key figure for the business office because in her 7 years she went from being a team member and accountant to the business manager, and in her last 4 years with the Center doing much more and taking more responsibilities than were listed in her job title.

I know she also spent a lot of time volunteering at her church and at the Flowing Wells School District and doing everything she could to improve education everywhere. She was an ardent Disney fan, a lover of Snoopy, and an active and involved grandmother.

I think these words are a good reflection of how Gina was viewed by her co-workers at the Center.

Kieran Richardson -- Andrew Weil Center or Integrative Medicine, director of operations.
Kieran Richardson
Coworker
August 19, 2020
I had the privilege of working with Gina during her time at the Center for Integrative Medicine at the U of A. She was kind, generous, and always had a smile for you. She helped everything run smoothly and made life a lot easier for all of us at the Center. I'm so sorry to hear of her passing and send my deepest condolences to her family for this loss.
With love,
Molly
Molly Burke
Coworker
August 17, 2020
Knew Gina during her time at the University. She was such a kind person and enjoyed our chats and working with her. My sincerest sympathies to her family. She spoke of them often.
Lila Sorensen
Friend
August 16, 2020