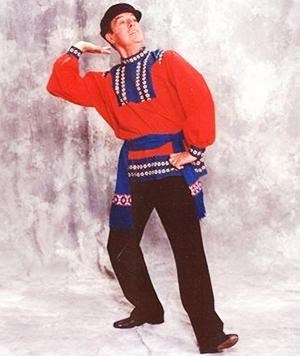 Richard G. Holden a Lifetime of dance, deceased October 14, 2015. Richard born in Braintree, Massachusetts in 1927, was drawn to the dance world at an early age, and was extremely fortunate to have encountered a Russian teacher who made Richard part of his dance troupe. He was hooked on Russian folk music and character and folk dance; they were his life passion. In England, he danced and studied the esoteric Benesh technique of transcribing dance steps into written symbols. After graduating from the London Institute of Choreology, he was invited by Dame Alicia Markova to join the dance company of the Metropolitan Opera Company at Lincoln Center, NY. He later became a soloist and the Met's resident choreologist. As a choreologist and assistant ballet master he worked with many notables of the dance world and with renowned companies, including the Harkness Ballet and American Ballet Theater. During this career, he was invited to Tucson, to start and subsequently direct the Tucson Civic Ballet. Richard choreographic ballets with regional themes, such as "Brooms of Mexico" (in collaboration with Ted DeGazia) and "Round Up," a comic, rough and ready cowboy ballet. Following retirement he settled in Tucson, but continued his contributions to the dance world. He choreographed ballets for several of the Tucson ballet schools including Upstairs-Downstairs and Two-Pigeons. On multiple occasions, he was invited by the Arizona State Opera Company to choreograph and stage dance interludes for their operas. He wrote dance reviews for the Tucson Weekly and he continued to write a regular column "Speaking of Dance" for the newsletter of the Balalaika Domra Association of American (BDAA). In 2014 he received the "Arizona Dance Coalition Lifetime Achievement Award." Russian speaking and a self-admitted Russophile, he was delighted to find the Arizona Balalaika Orchestra upon arriving in Tucson. He joined immediately and learned to play the balalaika. And then Richard created the Kalinka Russian Dance Ensemble. It was an integral part of Arizona Balalaika Orchestra's concerts from 1989 to 2007. His choreographic and staging contributions were unique. He transported us to the world of folk dance creating over 40 dances in the spirit of Russian, Ukrainian, Polish, and Jewish folk dances, as well as those inspired by the famous Moseyev Russian folk dance company. Richard danced with his Kalinka dancers until his 75th birthday! It was a tremendous partnership. He didn't give up his love of Russian folk music and played in the Arizona Balalaika Orchestra until a few months before his death. A Memorial Service will be held at a later date. Arrangements by NEPTUNE SOCIETY.

To plant trees in memory, please visit our Sympathy Store.
Published by Arizona Daily Star on Oct. 22, 2015.
MEMORIAL EVENTS
No memorial events are currently scheduled.
To offer your sympathy during this difficult time, you can now have memorial trees planted in a National Forest in memory of your loved one.
GUEST BOOK
3 Entries
Dear Richard, I will never forget how welcome you made me feel during my two visits to Tucson. As a fellow dancer, I was so happy to talk with you, learn from you, and even occasionally argue with you---as friends do!! I am so sorry that we lost touch after you wrote your autobiography. I am sad I can't tell you this in person. Hope you are teaching the angels to dance. XOXO Griselda
September 1, 2016
Richard, may you be dancing in the heavens!
Anne and JG
December 22, 2015
It was an honor to know you, Richard... You shall be so missed by family, friends, and the dance community of which you were an important and integral part... Rest in Peace...
Gina Ness
November 1, 2015