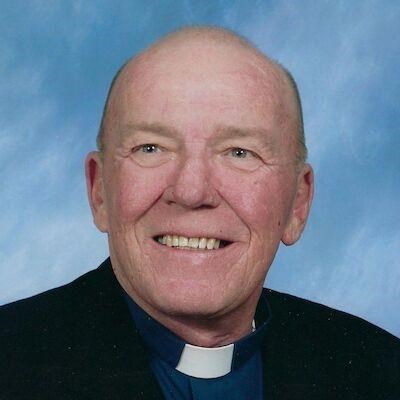 Fr. Robert Carney, whose opening line was always "just call me Bob," was born in Penns Grove, New Jersey, to Robert Carney and Margaret Peak. One of eight children, he was raised in a traditional Catholic family. As a youth he entertained ideas of being a priest, though his life took a wide circle to get there.

During the U.S. War in Vietnam, Bob served in the Army - private first class - in Alaska. In the topsy-turvy years that followed, Bob wrestled with the meaning of his life. This period may be best described with the comment he once made that he "got his talent for hearing confessions as a bartender and waiter." At his last assignment, at St. Francis de Sales Parish, Tucson, AZ, his was always the longest line outside the confessional.

In his late 30's, Bob described "finding himself" one night on a dreary street in St. Louis. In that moment, he turned a page. His recovery began. And he never turned back. At 43, Bob began study at Sacred Heart School of Theology in Hales Corner, WI, and Cardinal Stritch College in Milwaukee, where he received a Bachelor of Arts degree in May, 1990. He was ordained a priest in the Diocese of Tucson by the Most Reverend Manuel D. Moreno, D.D., on June 1, 1991.

Assigned to St. Anthony of Padua Parish in Casa Grande, AZ, his role included ministry to the migrant farm workers and their families in the missions at Stanfield and Maricopa, AZ. Bob often commented that his "real conversion" happened here among the people he served. Their lives and stories transformed him. "If we see the world through the eyes of fear, we're not seeing the story completely. We're not going to hear this — the sacred stories, the holy stories that — of people who are starving, people who are in fear for their lives." His heart was taken and the remainder of his life was committed to social justice.

His next assignment, as Associate and then Pastor of St Luke Parish in Douglas, AZ, thrust him into the heart and heat of the struggle for human rights: the US-Mexico border. The passion and stories of people marginalized by ideology and institution deepened his commitment to the Beloved Community, "la gente y el pueblo." He said, "The Church is not the crosses inside, but the members and migrants who gather there."

Bob's ministry came to include direct humanitarian aid work, The Corporal Works of Mercy. He stated, "The gospel demands that we act. The role of religion in contemporary migration is the role of the prophet, and the prophet doesn't predict the future but states what is. We must respond to what we are witnessing along the border. If not, one day our Savior will ask why we didn't do anything in the face of death."He was the people's priest. He preached the Gospel from the pulpit and lived it on the streets and desert trails. One of the founding members of the interfaith coalition Healing Our Borders, Bob helped organize a weekly prayer vigil at the Douglas, AZ/Agua Prieta Port of Entry for those who lost their lives in the desert. He put water on migrant trails. Regularly, he offered Mass at Casa Maria, the Tucson Catholic Worker Community. His Letters to the Editor were printed in local papers. He held vigil outside the Federal Courthouse. He fasted to honor those fallen in the desert. He was a founder of No More Deaths in Tucson and a long-time supporter of Derechos Humanos AZ.

Fr. Bob Carney "comforted the afflicted and afflicted the comfortable," as the Catholic Worker adage goes. This he accomplished with uncommon grace. No judgment: just passion, and compassion. He was a consummate humanitarian. A radical Christian.

Bob's public ministry included speaking out against war. As a Veteran For Peace, he knelt inside the gates of Ft Huachuca, AZ, and was arrested for refusing to cease praying. His prayers that day were for a cessation of "enhanced interrogation," i.e. torture training, that was being conducted on site.

At these public events, Bob always wore his rainbow-colored stole. This signature garment accompanied his signature smile. All colors together. In struggle. In hope. In love. The light this gentle-powerful man shed burns on in the lives of the many he touched, shimmering bright as his stole of many colors.

Bob Carney is survived by his sisters, Kathi (Stan) Compton and Monica (Scott) Ziglar, and brothers, Fran (Lindsay) Carney and John (Debbi) Carney and many beloved nieces and nephews. He was preceded in death by his parents, Robert and Margaret (Peak) Carney and his brothers, Leo, Edward and Paul Carney.