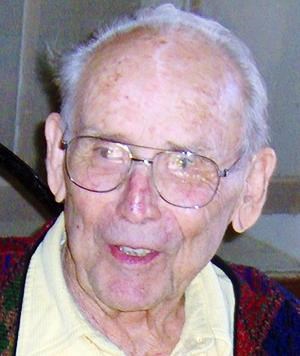 BORN
1921
DIED
2017
FUNERAL HOME
Adair Funeral Homes - Dodge Chapel
1050 N. Dodge Blvd
Tucson, AZ
BALL, Roger Clawson 3/18/1921 - 5/22/2017 Roger Ball, a long-time Tucson resident, passed away peacefully at TMC Hospice, Peppi's House, on Monday, May 22, 2017, at the age of 96. Roger was born and raised in Winona, MN, the older of the two children of Jesse and Lorna (Clawson) Ball. He graduated from the United States Military Academy in 1943. Upon his graduation, Roger married his hometown sweetheart, Charlotte Johnson. After earning his pilot's wings in 1944, Roger went to Italy and flew the B-17 Flying Fortress, completing 50 missions in World War II. After the war, Roger and Charlotte raised four children while residing throughout the United States during Roger's military career. They ultimately landed in Tucson, loved it, and stayed after Roger's retirement from a 25-year career with the United States Air Force, having achieved the rank of Lt. Colonel. Roger spent the next ten years teaching high school math at Catalina High School before retiring from Tucson Unified School District. During his retirement, Roger and Charlotte loved to travel, and they made many trips abroad. They were both especially fond of cruises and saw much of the world on their voyages. Roger and Charlotte also belonged to Forty Niner Country Club for over 30 years, where you could find him playing golf or joining in a bridge game with his friends. Roger and Charlotte were avid sports fans and attended many University of Arizona football and basketball games. Roger was a member of Builders Lodge No. 60 in Tucson AZ for 43 years and a 32nd Degree Mason of Tucson Scottish Rite. At home you would often find Roger reading a good book, listening to opera, or working a crossword puzzle. There was rarely a puzzle he could not solve. He is survived by three of his four children, Nancy (Harro) Ackermann of Albuquerque, NM, and their daughter, Laura Ackermann; Roger (Kati) Ball of Bigfork, MT, and their children, David (Alexis) Ball and Charlotte Ball (Dax VanFossen) and Sarah Ball of San Diego, CA. He also has two great-grandchildren, Carver and Aislinn Ball. He was preceded in death by his wife, Charlotte, his parents, brother, Richard D. Ball, and his son, John S. Ball. Arrangements by ADAIR FUNERAL HOMES, Dodge Chapel, Tucson, and Fawcett Junker Funeral Home, Winona.

Published by Arizona Daily Star on Jun. 4, 2017.
To plant trees in memory, please visit the Sympathy Store.
MEMORIAL EVENTS
To offer your sympathy during this difficult time, you can now have memorial trees planted in a National Forest in memory of your loved one.
Funeral services provided by:
Adair Funeral Homes - Dodge Chapel
MAKE A DONATION
MEMORIES & CONDOLENCES
2 Entries
I'm so sorry for the loss your family has suffered. May you gain comfort and strength by pouring out your heart in prayer to God.
Pat
June 6, 2017
I had the pleasure and good fortune of having Mr. Ball for Algebra at Catalina HS. Great teacher, I learned a lot and he made Algebra fun.
Would have never known he was a pilot in WWII due to his humility. May he rest in peace.
JERRY LEDESMA
June 5, 2017
Showing 1 - 2 of 2 results