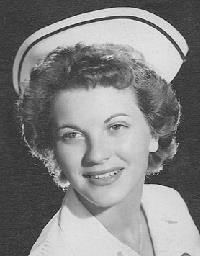 DUPERRET, Ruth Marie 86, died peacefully at home with family at her side on August 6, 2018. Ruth grew up in a Navy family and moved often in her early years. Her favorite memories were of Hawaii, where she obtained her RN degree in 1954. In 1956 she married Edward Duperret and subsequently had four children in five years (an act of extreme bravery). The young family settled in northern California before entering the Peace Corps in 1968, serving in the Truk Islands under very primitive conditions. In 1970 they moved to Tucson, where she earned an additional degree in Early Childhood Development. Thereafter she worked as an RN for 25 years, focusing on pediatrics and early computerization of hospital systems. She traveled to China, Egypt, and Russia in nursing exchange programs. Always a champion for underprivileged women, Ruth worked hard to give single mothers a fighting chance at a college degree. Her latter years were spent between Tucson and Greer; she loved summers in Greer and requested that her ashes be scattered in the beautiful meadows of her summer home. Ruth is survived by her brother, Thomas (Kathleen); four children, Robert, Michael (Ellen), Susann, and Steve; four grandchildren, Jeffrey (Elizabeth), Kevin, Bishop and Logen; one great-grandchild, Seraphina. A Mass will be held at the St. Elizabeth Ann Seton Church chapel on Saturday, September 8, 2018 at 11:00 a.m., reception to follow at 12:30 p.m. Arrangements by OASIS CREMATION.

To plant trees in memory, please visit our Sympathy Store.
Published by Arizona Daily Star on Aug. 12, 2018.
MEMORIAL EVENTS
No memorial events are currently scheduled.
To offer your sympathy during this difficult time, you can now have memorial trees planted in a National Forest in memory of your loved one.
Funeral services provided by:
Oasis Cremation & Funeral Care
GUEST BOOK
5 Entries
Ruth and I were first cousins. Although our family has been distanced over the years, I send my sincere condolences to Ruth's family. I remember her as a vital and caring person.
Warm regards,

Louise Pekrol Hanson. (Daughter of Martha Bevans)
December 4, 2018
My condolences to the family, may your hearts soon be filled with wonderful memories of joyful times together as you celebrate a life well lived.
Foster
August 15, 2018
Ruth was a very favorite patient of mine, she was a joy and a very bright light in life. I will miss her and am grateful for the opportunity to know her. May your memories of her brighten your days. I am so very sorry for your loss.
Marrae McWilliams
August 13, 2018
As a grad student volunteer, I met Ruth at Planned Parenthood in about 1970. She was so kind, and supportive, and smart, and pretty.
Marty Cramer
August 13, 2018
We are saddened to learn of the passing of Ruth, but grateful for her (and Edward's) service to our nation with the Peace Corps in Micronesia.