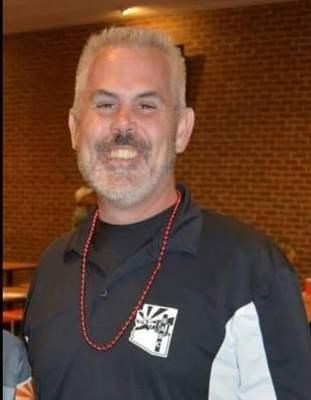 51, of Amado, AZ unexpectedly passed away on Sunday, April 28, 2019, after watching his daughter, Jessica and her team win a soccer tournament in Phoenix, Arizona.

Steve was born on September 5, 1967 in Syracuse, NY to Steve and Melissa Hulland Sr. During the next 16 years, Steve and his younger brother Jim enjoyed living in many different homes throughout the United States with his mother and father - a career United States Marine. During 1983 Steve Sr. retired from the U.S. Marine Corps and settled in Green Valley with his family.

Steve received his primary and secondary education from schools in Baldwinsville, NY, Memphis, TN, Pensacola, FL, Glynco, GA, Yuma and Sahuarita, AZ - graduating from Sahuarita High School in 1986. Throughout those years Steve made legions of friends, enjoyed Boy Scouting with his beloved grandfather, Bob Hulland and loving care and guidance from his grandmother, Barbara Hulland. Steve developed a lifelong love of tinkering, operating computers and being an excellent athlete - especially on the soccer field. As a young and early computer expert, Steve acquired and donated several early desktop computers while helping the late Mr. Manaheim develop a very successful computer program at Sahuarita High School. Steve thrived in making and helping friends be successful doing whatever they might enjoy - something which was destined to be a major part of his adult life.

Steve attended United States Marine Corps boot camp in San Diego, CA during late 1986 followed by earning his FAA Air Traffic Control license from the USN/USMC Air Traffic Control Schools in Memphis, TN. Subsequently stationed in 29 Palms, CA and Iwakuni, Japan. Steve became a Sergeant of Marines before receiving an honorable discharge and returning to his Arizona home in 1994 - where he lived with his family in the Elephant Head community.

Steve was an original member of the Elephant Head Volunteer Fire Department, excelling as a skilled structural and wildland firefighter and EMT - providing his community public safety leadership, compassion and service. Early this century, Steve decided to move to Phoenix in order to improve his considerable computer skills - quickly earning all available Microsoft advanced computer technology certifications and attended Chapman College. Steve lived and worked within the IT field in Phoenix, AZ helping companies, such as Troon Golf, Circle K and others, developing comprehensive and excellent computer-based retail operations. His dedication to helping others had now become Steve's "modus-operandi". Steve offered his friendship to everyone and helped others succeed, expecting nothing in return - but always being available to help his many friends achieve their goals while continuing to serve EHVFD from afar and whenever visiting his family home. While working at Mt. Lemmon Fire Department, Steve met and married firefighter Samantha Beal of Tucson and Summerhaven, AZ. In 2003, Samantha and Steve's daughter, Jessica Rae arrived in this world. Steve would devote his life to ensuring that Jessica received the best care and guidance. Jessica was his "guiding light."

As Fire Equipment Specialist for United Fire in Tucson, AZ, Steve applied his considerable knowledge and skills to become a dedicated leader - providing the best, most innovative and technologically advanced products and services designed to protect people and property from devastating effects of fire and other disastrous events. Steve became the "go-to" person for almost every fire department within Arizona. Steve had the exceptional ability to resolve problems, provide invaluable advice and friendship to those he served.

Even while traveling throughout Arizona, Steve provided Jessica with more love, guidance and opportunities that few youngsters receive. Steve was instrumental in forming, managing and coaching Jessica's soccer team Evolution. The girls on Jessica's team started playing together more than nine years ago and have become one of the most successful soccer teams in Arizona. Not content with just helping to ensure the teams success, Steve was selected as a member of the Pima County Junior Soccer League (PCJSL) Board of Directors. Steve excelled in helping to ensure that PCJSL provided hundreds of youth soccer players with a world class experience.

In lieu of flowers, donations can be made to the " '03G Evolution " soccer team. Contact Tricia Tracy ([email protected]) for details. All donations will be used to support Jessica Rae Hulland's continued participation in soccer and her quest to play college and potentially become a member of the United States Women's Olympic and/or National Soccer Team.

Even if we did talk him into getting a tattoo...

Shelia
May 18, 2019
Steve will be greatly missed by so many.His dedication to Team Evolution was something to be in awe of. As the team manager,he put so much work in and even more behind the scenes. He also assisted with coaching and consistently focused on the positive. He was always so encouraging to the ladies regardless of the situation. Not only did he give so much of his time to the team, he was extremely generous financially. He was a very modest man who put his daughter, Jessie, first and treated the ladies of Evolution as though they were a part of his family. He never had a bad word to say about anybody and certainly helped me become a better person. For that and many other reasons, I feel so fortunate to have spent many soccer seasons with him. Rest in peace my friend.
Paul Louis
May 16, 2019
An amazing person that lived life through his heart, determined to put smiles on peoples faces, and kindness in their hearts. He inspired so many of us to become better! Your legend will carry on my friend and your kindness will never be forgotten.
Hendrickson Family
May 15, 2019
Steve, you will always be in our thoughts & hearts and we'll forever be grateful for all you did for us and the Sahuarita soccer community!! Thank you, Sir!! RIP ~Ralph , Rosie & Adrian Alvarado
May 15, 2019
Mr. Steven had a smile that brings light on a cloudy day. So sorry the family has lost a love one . May our heavenly Father give you comfort and strength beyond measure- Ps. 20:1,2
Jess
May 15, 2019