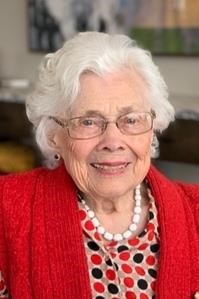 Helen Virginia Wellendorf, a devoted and loving wife, mother, grandmother, great grandmother and sister, went home to be with the Lord on July 21, 2021, at the age of 96. Virginia was born on May 18, 1925, in Sapulpa, Oklahoma, to George T. and Hazel Miller. She graduated from Capitol Hill High School in Oklahoma City. After high school she worked in Oklahoma City as a secretary for an insurance company.

Virginia met the love of her life, Ted Wellendorf, at a USO dance in Oklahoma City and they became engaged before he shipped out to serve in the Pacific during World War II. As soon as he returned, they married and boarded a train to Youngstown, Ohio, where she met his family for the first time.

They returned to live in Oklahoma City where Virginia supported her husband while he studied for his accounting degree under the GI Bill at the University of Oklahoma. After graduation, the family moved to Tulsa where Ted worked for Oklahoma Natural Gas Company as an accountant. In Tulsa, they raised two sons and Virginia became a full-time homemaker.

A dedicated mother to her two sons, Glen and Don, Virginia always put family first calling her children and grandchildren her greatest source of happiness. Virginia enjoyed cooking (she was a great cook), knitting and decorating her home. She and Ted enjoyed playing bridge and were part of the neighborhood bridge club.

The family enjoyed many vacation trips and other activities together during those years. They were also active in First Lutheran Church, making friends and attending services regularly. As the boys grew, Virginia could do more outside the home. Being an avid bowler, she worked part-time for Yale Bowl in Tulsa organizing the women's daytime bowling leagues and was able to accompany Ted on some business trips. They also enjoyed playing golf together.

Later in life, after the boys graduated from OSU and established their own families, Virginia and Ted moved to the Inverness Village retirement community where they lived their final years. Virginia was a committed Christian who loved the Lord. She was a member of Asbury Methodist Church in Tulsa.

Virginia and Ted were married 69 years before his death in 2015. They were wonderful parents and terrific examples of the greatest generation.

Visitation is scheduled for Monday, July 26, from 4 p.m. to 6 p.m. at Floral Haven Funeral Home with a private graveside service to follow. Memories also can be shared at

www.floralhaven.com
Published by Tulsa World on Jul. 25, 2021.
To plant trees in memory, please visit the Sympathy Store.
MEMORIAL EVENTS
Jul
26
Visitation
4:00p.m. - 6:00p.m.
Floral Haven Funeral Home
6500 S, Broken, OK
Funeral services provided by:
Floral Haven Funeral Home & Crematory
MAKE A DONATION
MEMORIES & CONDOLENCES
Sponsored by Floral Haven Funeral Home & Crematory.
2 Entries
Virginia was an endearing woman whom we had the pleasure to get to know during our Tulsa visits. Her stuffing recipe is just one of treasures she left us. I had the pleasure of joining her for lunch with Don and Susie on occasion. She was an attractive woman that showed grace, charm, and a sense of humor, especially when telling stories of golfing in Arkansas or raising children. Though we will miss her, we celebrate the life she lived and her new beginning. With our sympathy, The Saether Family
Maggie Saether
Family
August 9, 2021
Our family has looked forward to seeing Virginia and the Wellendorf family in Tulsa at Thanksgiving each year as per tradition. She was always generous with her attention and kind with her words. She took great pleasure in being around her children and grandchildren. Her stuffing recipe will remain a favorite of ours, and just one of her legacies. Mostly, she was an endearing woman, and she will be missed.
Maggie Saether
Family
August 9, 2021
Showing 1 - 2 of 2 results