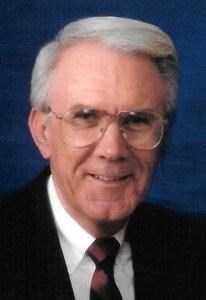 James Allen Morris, 87, passed away on January 10, 2021, after a long battle with cancer. He was born in Pauls Valley, Oklahoma, to Roy A. and Hazel G. Morris and graduated from Pernell High School in 1951. It was at Pernell where he met his wife of 67 years, Patsy C. Lee. James attended college at East Central State University before he and Pat moved to Colorado. James then served proudly in the U.S. Navy during the Korean War, assigned to the USS Kearsarge. Upon returning from his military service, James went to work for Skelly Oil Company. He and Pat moved often with Skelly, and it was while they were living in Wilson, Oklahoma, that their only child, Carla was born. Several moves later took the family to Tulsa where James completed his college degree at T.U. and then eventually became the Manager of Administration for the Central E&P Division. He continued to work for the company after it merged with Getty Oil and then Texaco. James retired in 1992, and he and Pat began traveling all over the country in their motorhome with the Dean's RV Camping Club. James loved to play golf, tell stories, work in his woodshop, and was wicked at dominos. He was a truly great family man, and loved spending time with his grandson, Jay. James will be missed by all those who knew him, but he will never be forgotten. James is survived by wife, Patsy Morris; daughter, Carla and her husband, Bryant Coffman, and grandson, Jay Coffman, all of Tulsa; as well as a mile-long list of family members that were all very dear to his heart. The only service will be a private, graveside memorial for the family. Friends may leave condolences for the family by visiting www.moorefuneral.com. Moore's Southlawn 918-663-2233
To plant trees in memory, please visit our Sympathy Store.
Published by Tulsa World from Jan. 12 to Jan. 17, 2021.
MEMORIAL EVENTS
No memorial events are currently scheduled.
To offer your sympathy during this difficult time, you can now have memorial trees planted in a National Forest in memory of your loved one.
Funeral services provided by:
Moore Funeral Home - Southlawn Chapel
GUEST BOOK
12 Entries
Pat, we are so sorry to hear of James passing. We had such good times in the years we were in the camping club. He was the classic Gentleman in every way. Will keep you and your family in our prayers. May God Bless and strengthen you Pat.
Wayne and Betty Butts
January 19, 2021
Will always remember James as a gentleman and a very kind man.
Ray & Claudia Beights
January 14, 2021
Pat so sorry to hear of James passing, we had lots of good memories of James while in the RV Club. Always enjoyed his story's he had plenty and some were told more than once. James was a classy guy, my grandpa alway told me to keep my hair combed and my boot shined and James was that man, I will miss him. You will be in our prayers always Love You
Sam and Ann Cox
January 13, 2021
Pat so sorry to hear of James passing. He was such a nice person I loved the fun at Deans. I lost Ray Feb last year.
Elizabeth McKibben
January 13, 2021
It is so sad to know of James' passing. I like to remember all the great times we had together. He was there to help when he could. I will miss a good friend. My prayers are with you.
Tiffany Griffin
January 13, 2021
Pat, so sorry to hear about James, had a lot of great memories, like when we ran into you two in Ouray in the middle of the night while setting up camp. He was definitely a true gentleman. Our prayers are with you.
Steve & Sue
January 12, 2021
Pat our prayers are with you and your family. James was a good friend and was always there then a fiend was in the hospital. He will be missed. Take care
James & Nora Cox
January 12, 2021
Pat, my heart goes out to you. I miss all of our camping days.
Teresa Hutchins
January 12, 2021
Pat, Our deepest sympathy in the passing of James. We always enjoyed visiting with you & James at the Dean´s RV Camping Club campouts. Many fond memories!! We have missed you both the past few years since you sold your rig. Our prayers are with you & your family. May your memories sustain you. Your RV friends,
Dale & Connie Carter
January 12, 2021
Pat, Helga and I enjoyed camping with y´all! I liked our talks about the oil fields in Monahans , TX. My prayers are with you and all your family.
Dennis Bevel
January 12, 2021
Dear Pat, you both have been in my thoughts and prayers these past years and have missed you. Both Carl and I have always considered you both as good friends and enjoyed our visits at the RV campouts.
Phala Clough
January 12, 2021
Dear Pat and Family -James was a great guy. Enjoyed camping with you both over the years. He will be missed by many. Our deepest sympathy Ken and Linda Johnson
Kenneth L Johnson
January 12, 2021