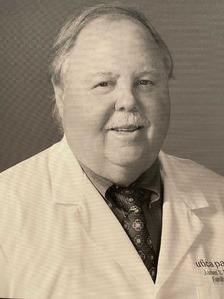 He married his high school sweetheart, Patricia Greene, in 1975.

Sam attended Altus Junior College, Southwestern Oklahoma State University and the University of Oklahoma where he received his Bachelor of Science degree in pharmacology.

After graduating from pharmacy school, Sam attended Oklahoma College of Osteopathic Medicine in Tulsa (now OSU College of Medicine) and graduated in 1980 and completed his internship at OCOMS in June 1981. One day later, he set up his practice in Oologah, OK, along US 169, where he created a thriving medical facility out of an old bait shop. He was ultimately board certified in family medicine. The Oologah Family Clinic soon became an established and well-known resource for ailing people and was crucial to the area's development.

For nearly 40 years, Sam focused on the health, welfare and medical needs of the Oologah community, becoming one of the most prominent citizens and leaders of Rogers County. In addition to a full schedule of patients, he was the physician for the Oologah Mustangs athletic teams as well as the doctor for PSO/AEP. He served as the Rogers County, OK, medical examiner and was chief of staff at Claremore Regional Medical Center. He also served on the Board of Directors for Lakeside State Bank and was a past president of the Oologah-Talala Public Schools Foundation and past president of the Oologah Chamber of Commerce -- all the while serving as assistant clinical professor at the OSU College of Osteopathic Medicine.

Sam thrived on helping others and providing medical care to the families in the Oologah-Claremore area. He helped an incalculable number of people with everything from minor injuries to major, multi-people emergencies. The patients he had as children became parents themselves and returned to the Oologah Family Clinic as a new generation.

As accomplished and engaged as he was in his profession, Sam loved nothing more than spending time with his friends and family, especially his grandchildren.

Sam semi-retired in 2018 but was still active in medicine.

Sam was preceded in death by his mother and father. He is survived by his wife, Patty; two sons, Joey (and wife Whittney) of Tulsa, OK and their children, Meryl and Sam; and Jonathan (and wife Whitney) of Tulsa and their two children, Stella and Jack; two sisters, Susie Sunderland of Utah and Sara Carter of Tulsa; as well as many nieces and nephews.

In lieu of flowers, the family requests donations be made to The Power of a Nickel organization or St. Jude's.

www.collinsvillefh.com
To plant trees in memory, please visit our Sympathy Store.
Published by Tulsa World on Jun. 8, 2021.
MEMORIAL EVENTS
Jun
10
Visitation
5:30p.m. - 7:30p.m.
Collinsville Dolton Funeral Home Chapel
1302 W. Main, Collinsville, OK
Jun
10
Memorial service
5:00p.m.
First Baptist Church of Collinsville
1301 W Main St, Collinsville, OK
Funeral services provided by:
Collinsville Dolton Funeral Home - Collinsville
MAKE A DONATION
Please consider a donation as requested by the family.
MEMORIES & CONDOLENCES
Sponsored by Collinsville Dolton Funeral Home - Collinsville.
4 Entries
Sam was a year behind me in Medical School. We lost a good decent man. He was not only an excellent physician but someone that I could truly call my friend. God Bless Sam and his family.
Gregory M. Schmidt D.O.
Friend
July 19, 2021
My heartfelt sympathy over the loss of Dr. Stauffer. He was a genuine help when my husband and I moved to Oologah in the summer of 2016. Always a gentleman with time to listen to you. God bless your family.
Vicki Perritt
Work
June 22, 2021
He changed my life. I am a nurse and he was actually my physician. We also worked together when he was on staff at a hospital I worked at. I have missed him so much. One of the kindest souls I know. Prayers for your family.
Laurie Hilliard
Other
June 22, 2021
Our thoughts and prayers are with the Stauffer family. Dr. Stauffer was our doctor for many years. The whole family saw him. One thing I admired most about Dr. Stauffer was his patience. He always made you feel comfortable talking to him about anything. He will be greatly missed by us and the whole community. He was one in a million. Rest in peace.
Helen Davis
Other
June 8, 2021
Showing 1 - 4 of 4 results