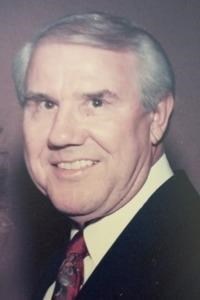 Jerry was born in Henryetta, OK on February 10, 1932. Jerry served in the Navy and graduated from the University of Central Oklahoma with a degree in Physics. Jerry began his aerospace career at American Airlines and moved to Rockwell International which was later acquired by The Boeing Company. As an aerospace engineer at Rockwell, Jerry became Director of Operations and Plant Manager of the McAlester Plant. He then was promoted to Director of Operations of the Tulsa Rockwell Plant and retired as the Director of Commercial Program and Business Development. When Rockwell was taken over by Boeing, Jerry was promoted to the executive Payroll of Boeing. In his career, Jerry had the great fortune of working on all 13 Apollo projects. He served as the Project Engineer of the Space Shuttle Payload doors and in the design and development of the B-1 Bomber.

Jerry lived a full and vibrant life. He enjoyed travel, golf, hunting with all of his buddies and being with his family. He was a tremendous role model to his family and friends. He will be deeply missed, but his memory will live on forever in the hearts of his surviving family and friends.

Jerry will have a private ceremony with his immediate family and hope to hold a public service or celebration when the public health crisis improves.
To plant trees in memory, please visit our Sympathy Store.
Published by Tulsa World on Feb. 21, 2021.
MEMORIAL EVENTS
No memorial events are currently scheduled.
To offer your sympathy during this difficult time, you can now have memorial trees planted in a National Forest in memory of your loved one.
GUEST BOOK
6 Entries
Betty and I offer sympathies to Linda, Mark , John and the rest of the Thetford family. Jerry was my big brother and we did all those boy things together. He was a young mentor for me and I remember him as a kind person. Jerry liked to build things even when he was very young. His achievements started early! Bless you Jerry, I miss you.
Mike Thedford (Thetford) Sr.
February 22, 2021
We are saddened to hear of Jerry´s passing. He was a longtime friend and we had a lot of good times together. Prayers for the family.
Hal and Debbie Dalton
February 21, 2021
Linda, dear. We are saddened to learn of Jerry's passing. We have fond memories of good times playing golf and spending quality time with you and Jerry. Our love, heartfelt sympathy, and prayers go out to you and Jerry's family. Bert and Julie
Bert and Julie Lowry
February 21, 2021
I offer my sympathy to the family for their loss. We had common interests working on the Apollo and Space Shuttle Pay Load Bay Doors. Will remember him in my prayers at Sunday Mass.
Francis Burke
February 21, 2021
Jerry, aka Papaw, shared his love for golf with me at an early age. I remember fun golf outings at White Hawk golf course with him and watching errant golf balls flying into his backyard while sitting on the porch. Due to his influence, I have continued to play the game throughout my life. Papaw would almost never miss a sporting event that any of his grandchildren played in. He was one of our biggest supporters and mentors. Thank you Papaw for the all the love and memories.
Paul Thetford
February 21, 2021
Papaw was a man of kindness and principle. He knew how to do good in this world and did it. He touched many lives, and we will all remember the kindness he gave. Love you Papaw.
Grant Thetford
February 21, 2021