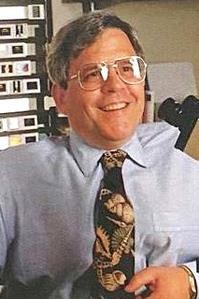 John Holliman never let his physical challenges stand in the way of being part of the team. John was confined to a wheelchair at the age of five following an accident. Since his high school days at Holland Hall he had a keen interest in sports and along with Mayor Hewgley, John kept the basketball scorebook for the school. He was an inspiration to all because of his dedication, persistence and humor.

John attended undergraduate school at the University of Illinois and while there became President of the Sigma Chi chapter. Before there was "Special Olympics", University of Illinois helped lead the nation in athletic events for the disabled. John was extremely proud that he and his teammates won the international basketball championship played in Hawaii.

John was a 1975 graduate of the University of Oklahoma College of Medicine and joined that faculty in 1979. In 1985, John was named Director of Undergraduate Teaching Programs in the Department of Pathology. John was passionate about teaching and his students knew him as one of the most articulate, knowledgeable and enthusiastic instructors. He was a 23-time nominee and eight-time winner of the College of Medicine's prestigious Aesculapian Award for Excellence in Teaching and the 1985 recipient of the Stanton L. Young Master Teaching Award. John served as president of the Oklahoma State Association of Pathologists and was a founding member of the International Group for Research in Pathology Education. He was named Physician of the Year in Academic Medicine in 2002.

In 1996 John and his wife, Claudia established an Affiliated Fund with the Oklahoma City Community Foundation and through it were able to make many charitable donations to both local and international organizations. In 2001 the couple endowed the John H. Holliman Professorship of Pathology Undergraduate Medical Education professorship at the University of Oklahoma.

John was warm and kind. He was soft spoken and never angry. He was a true spirit of good in the world.

In lieu of flowers, please send contributions to the Oklahoma City Community Foundation.
Published by Tulsa World on Sep. 12, 2021.
To plant trees in memory, please visit the Sympathy Store.
MEMORIAL EVENTS
To offer your sympathy during this difficult time, you can now have memorial trees planted in a National Forest in memory of your loved one.
MAKE A DONATION
MEMORIES & CONDOLENCES
1 Entry
John was an inspiration to those of us who were lucky enough to be his teachers and colleagues. Please know that He is remembered by me and thought of often. My sincere sympathy and best wishes to you all. Fred Jordan, former member of the OU Faculty and former Chief Medical Examiner.
Fred B. Jordan
School
September 26, 2021
Showing 1 - 1 of 1 results