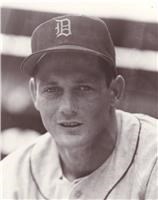 ABOUT
Tuscaloosa County High School
FUNERAL HOME
Magnolia Chapel North
4905 Highway 69 N
Northport, AL
NORTHPORT – Frank Lary, age 87, of Northport, Ala. died December 13, 2017. Services will be 2 p.m. Saturday, December 16, 2017, at Magnolia Chapel Funeral Home North with Bro. Alan Roggli presiding. Burial will follow in Tuscaloosa Memorial Park with Magnolia Chapel Funeral Home North directing. Visitation will be from 12 noon until the service time at the funeral home.
He was preceded in death by his parents; Joseph Milton and Margaret Emma Rench Lary and brothers, Joe, James, Raymond, Ed, Al and Gene Lary.
Survivors include his wife of 43 years, Mary Kathryn Lary; daughters, Nita Johnson (Michael), Cindy Landers (Mark), and Angie Lancaster (Bruce); sons, Frank Lary, Jr. (Becky) and Gary Lary, Les Evans (Barbara); sisters-in-law, Maurice Lary, Mary Ann Lary and Jean Lary Propst; 16 grandchildren, and 23 great- grandchildren
Frank was a standout pitcher who made his name as the Detroit Tigers' "Yankee Killer" throughout his 12 - year major league career. He attended Tuscaloosa County High School and pitched for the University of Alabama Baseball team, helping the Crimson Tide to the 1950 college world series, pitching two winning games. Frank was an American League all-star in both 1960 and 1961.
Frank served his country in the military during the Korean War. After returning to his baseball career, he was best known for his outstanding performances against the New York Yankees in an era that featured players like Micky Mantle, Yogi Berra and Roger Maris. He was the first pitcher in 50 years to beat the New York Yankees seven straight games in a run of 21 wins and 7 losses. His best season was in 1961, when he was an all-star, winning a Gold glove award as the best fielding pitcher. Frank was inducted into the Alabama Sports Hall of Fame in 1978 and was voted to the Alabama All Century Team.
From as early age Frank loved music. He played in the Lary Brothers Band and had the opportunity to play at the Grand Ole Opry several times.
Frank retired from the Tuscaloosa County Road and Bridge department in 1990. Over the years, Frank and his wife Mary, went to card shows, Baseball Fantasy Camps and he played in several Old Timers games.
He loved Alabama Football and didn't miss watching the Detroit Tigers baseball games He was an incredible man who lived an extraordinary life, and will be greatly missed.
Pallbearers will be Mark Landers, Jason Landers, Zeb Landers, Luke Landers, Butch Lary, Joe Lary, Eddie Lary, Bruce Lancaster and Ray Glenn.
Honorary pallbearers are Scott Johnson, Barton Lary, Blake Lary, Jeff Lary and Arnie Lary.
Special thanks to caregivers Georgia Scott, Ann Hankins, Judy Dodson, Amedisys Home Health.
In lieu of flowers, the family request donations to Eagles Wings, Inc. @ 12379 Eagles Wings Drive, Coker, Alabama 35452.

Published by Tuscaloosa News from Dec. 15 to Dec. 16, 2017.
To plant trees in memory, please visit the Sympathy Store.
MEMORIAL EVENTS
To offer your sympathy during this difficult time, you can now have memorial trees planted in a National Forest in memory of your loved one.
Funeral services provided by:
Magnolia Chapel North
MAKE A DONATION
MEMORIES & CONDOLENCES
66 Entries
We want to thank all of you for your comments, condolences and prayers during the difficult time of the passing of our father. It means so much to us.
The Children of Frank Lary
Cindy Landers
December 30, 2017
May the God of all comfort be with family and loved ones.
Stacy'
December 28, 2017
To the family of Mr. Lary: Please know that you are in our hearts and prayers; and for sure, our Heavenly Father who will be with you always and will comfort you always. Peace!!! m.g.
December 27, 2017
May the hearer of our prayers grant you peace from above
For he cares for you
J
December 22, 2017
May the God of all comfort be with family and loved ones.
Stacy
December 22, 2017
My sincere condolences to Frank's family. Frank and Al were very kind to me when I was a kid. They took me out hunting and were very patient with me. Also, a number of years later, I was lucky to be able to visit them again when they played bluegrass for us. I appreciated their love of life and their wonderful sense of humor. (My dad William Lary Sr. always thought the world of them too. He admired them both for their athletic abilities as well as their kindness.

John Lary
John Lary
December 21, 2017
So Sorry to read about the loss of your loved one. Death is never easy regardless of ones age and Psalms 90: 10 shows how he lived a long life of special mightiness from God. Keep the many, many memories of your loved one close in your hearts and minds and cherish them forever. May the comfort of God be with you all during this time of grief.
Betty Armour-Fowler
December 21, 2017 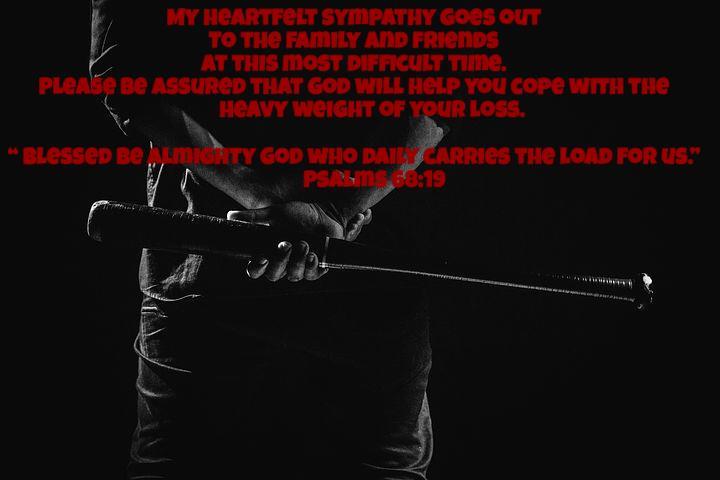 I am so sorry for your loss. Losing a loved one is one of the hardest things to deal with.
May God's comfort bring relief and may you feel comforted by the love and support of family and friends at this time of sorrow.
G M
December 21, 2017
I remember going to his home on several occasions and awing at the staircase made of baseball bats. Peace and love to his children with whom I grew up.
Patty Sprayberry
December 20, 2017
I started following the Tigers in the late 1950's. I had two heroes, and Frank was one of them. He pitched the first game I saw at Tiger Stadium. I can easily remember every baseball card he was on, even after he left Detroit. It seems each time our heroes pass, a little bit of us go with them. I have many memories of the "Yankee Killer" and am saddened at his passing. I had always hoped to get a chance to meet him. Just letting you know at one time, he meant an awful lot to a little boy. My condolences to his family and friends.
John Paton
December 19, 2017
Great memories of listening to the Yankee Killer on WJR am radio with my father on our dairy farm in rural northern Pennsylvania... after the evening farm chores were done of course.
We were (are) diehard Tiger fans and despised the Yanks. I can still see my Dad's face filled with joy as Mr. Lary and the Tigers won each game against that team, often times in dramatic fashion.
To the Lary family, I have a smile on my face today in remembrance of those cherished times
Roger Rockwell Canton
December 19, 2017
One of my favorite Tigers when I was growing up in Toledo. I wish that he had been on the 1968 team that won in all!
Richard Apling
December 19, 2017
The World of Baseball loss a great player. May God grant Frank Lary family and friends comfort during this time of sorrow. Psalm 34;18,19
M Scott
December 19, 2017
Mr. Lary really mastered the art of defeating the Yankees in the 1950s and early 1960s,he was always at his best when he faced the Yankees!I watched him weave his magic over them quite a few times as a kid .God bless and R.I.P.
Peter Cullen
December 18, 2017
Karan Wider
December 18, 2017
May your hearts soon be filled with wonderful memories of joyful times together as you celebrate a life well lived.
December 18, 2017
My condolences to the Lary family and friends. May the words in Ecclesiastes 9:5 comfort you to know that he is resting in peace. May God give you the strength to endure.
..
December 18, 2017
To the family of Frank Lary:
Very sorry for your loss. It is at a time like this that we can turn to the promises found at Isai5:25 to find comfort, strength and hope. We long to see their fulfillment soon.
J W
December 18, 2017
May God bless you and your family in this time of sorrow.
B
December 17, 2017
Offering my deepest sympathy to the family. Larry will be missed very much. Keep his memories close at heart.
Michigan
December 17, 2017
Mr Lary had so many fans who loved him and we thank his family for letting him share his talent with us. May the Almighty God of comfort be with the Lary family and friends at this most difficult time. We now await the time when we will be reunited with Frank again in paradise. God love you.
Sally
December 17, 2017
I am so sorry for the loss of your loved one. Please find peace and comfort in Psalms 119:76.
December 17, 2017
I remember Frank Lary pitching for the Tigers when I was growing up in Redford Township, Michigan.
Frank Lary, Jim Bunning Phil Regan and all the great Tigers of that era.
Rest in Peace Mr. Lary
Dale Perry
December 17, 2017
Saw him pitch against Red Sox in the early years. Quite the pitcher.RIP. Great man.
Ron Sayles
December 17, 2017
With heartfelt sympathy. Please accept my deepest condolences. May you continue to cherish his precious memories. May you find comfort in the God of all comfort to offer you comfort and to give you the strength to endure during these difficult times ahead.
December 17, 2017
A great pitcher a great person and a great friend. He taught me so much about pitching when we were with the DETROIT TIGERS,,,YOU WILL BE MISSED....
PHIL REGAN
December 17, 2017
My deepest condolences to the family for the loss of your loved one. May God strengthen you and give you peace during this difficult time. Psalms 29:11.
December 17, 2017
Sincere condolences. May you turn to the God of tender mercies who is also the hearer of prayer.

J T
Chicago
December 17, 2017
I was born in Detroit in 1947 and left in 1965 so I was able to follow Frank's career with the Tigers. He, along with Al Kaline and Norm Cash were always my favorite players.
Tim Slongo
December 17, 2017
Truly saddened to hear the news about Frank Lary. His fine legacy will surely be remembered. I hope to meet him in Paradise! Luke23:43
December 17, 2017
My deepest condolence to all the Family, may the God of comfort provide you with peace of mind as we await the time when our loved ones asleep in death, see life again under peaceful, perfect conditions.

JEFF LARY
Jeff Lary
December 15, 2017
You will be missed at my beauty shop You were the biggest star and celebrity that I ever had the pleasure to Groom Sir. One of a kind gentleman !
susan sudduth
December 15, 2017
My dad and him were friends during high school and college. I got to know a little in the nineties, I printed him some baseball cards. I'm thankful to have known him. I think he was known during his pro career as the "Yankee Killer".
Ted Roberts
December 15, 2017
It was an honor to meet one of Alabama's finest and deliver mail to this very sweet man. I learned a lot about his accomplishments over the past 11 years. I will miss seeing his smile.
Sandra Hunter
December 15, 2017
May God comfort you all with the precious memories and surround you with his love through this time and always. Renea Henson
Renea Henson
December 15, 2017
Frank was known by baseball fans as "The Yankee Killer" and was a great pitcher for the Detroit Tigers. To me though he was always a kind, wonderful uncle that I always enjoyed talking to. He had a great sense of humor like all of the Lary boys. I will really miss him. My condolences to Mary and to Frank's sons, daughters, and grandchildren. If they have a baseball All-Star team in Heaven, Frank will be on it.
Joe Lary
December 14, 2017
I am so sorry for the loss of your loved one. May prayers strengthen you and memories comfort you, and may our Lord Jesus Christ and God our Father, who loves us, comfort your hearts and "make you firm". 2 Thessalonians 2:16, 17
AB
December 14, 2017
Showing 1 - 66 of 66 results