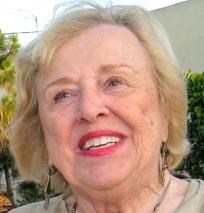 Died peacefully at her home in Corona del Mar, California on Monday, September 6, 2021 of heart failure. She was surrounded by family, friends, and caregivers, peacefully joining her husband Michael D. Nadler of 50 years. She was a beloved aunt to 12 nieces and nephews, and many grand nieces and nephews. Born in Bellechester, Minnesota to Isadora and Clarence Majerus, Lori was the eldest of four girls. She graduated from St. Felix High School in Wabasha in 1946, and from the College of St. Catherine in St. Paul in 1953 with a degree in home economics and sociology. Ever independent, she moved to California in 1958. Lori obtained a Masters in Education from California State University, Long Beach and taught in junior and senior high schools in Los Angeles until she married Mike in 1969. In the 1970s, the couple settled in Corona del Mar, California where they could enjoy walks to the Pacific Ocean. With Mike's partnership, Lori became an entrepreneur, launching a small business out of her home that manufactured women's sportswear. Lori enjoyed tennis and skiing, and travelling the world with Mike. The couple visited locations such as Russia, China, New Zealand, Norway, and skied in the European Alps, Canada, and the US. Lori was generous to both her family and larger community. Nieces and nephews who visited California were treated to great conversation, meals, and trips. St. Kate's was a particular focusof her generous philanthropy. She volunteered for fundraising initiatives for the college, served on the Board of Trustees from 1997–2007, and established an endowed scholarship fund in her name, which continues to support the education of young women from California. In 2005, Lori was named to the Centennial 100 that honored those who made a significant impact on St. Catherine in its first one hundred years and in 2006 she received the Medal of Honor for outstanding service to the College. Lori was also an active volunteer and donor to several arts groups and served as a founding member of the Center Stars at Segerstrom Center for the Arts in Irvine, CA.  Lori is survived by two sisters: Adelaide 'Addy' Edwards of Los Angeles, CA and Margaret Trondson of White Bear Lake, MN, and many nieces and nephews. Lori was preceded in death by her husband Michael D. Nadler, her parents Clarence and Isadora Majerus, and her sister Bernice 'Bunnie' Powers of Rochester, MN. Lori requested that donations in her memory be made to the Lorraine Majerus Nadler Southern California Scholarship at the College of St. Catherine in St. Paul, Minnesota. A graveside burial will be held on Saturday, October 9 at 11 a.m. at St. Mary Catholic Church Cemetery, 221 Chester Ave, Bellechester, MN. All are welcome.