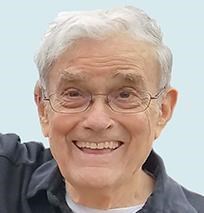 Age 85, of Roseville Passed away peacefully in his home on November 14, 2020. He was preceded in death by his parents, Lindsay and Bertha Brown; brothers, Dick, Nord, and Barny; and sister, Marcinne. He is survived by his beloved wife, Jackie; sister, Elizabeth Norlin; children, Tony Brown, Dan (Lisa) Brown, Linda (Jim) Richie, Mikey (Rebecca) Brown, Andy (Leah) Brown, Tina (Donny) Frey, and Tammy (Jeff) Frey; grandchildren, Matt (Kandace) Brown, Erin (Cody) McGregor, James Richie, Jake Richie, John Richie, Colton Brown, and Gracelyn Brown; and the mother of his children, Janet Brown. Robert accomplished much in his life. He graduated from Stillwater High School in 1953 and was class president. He was the first in his family to go to college, earning the degrees of BS in math and speech from Winona State, and M.A. and Ph.D. in educational administration and psychology from the University of Minnesota. He began teaching math and physics, and was a counselor and track coach, at Farmington and then Simley High Schools. In 1964, after earning his Ph.D., he began his career teaching Educational Leadership at the University of St. Thomas, where he taught, built programs, developed classes and was Director of Graduate Programs in the School of Administration for over 50 years. In addition to his teaching at St. Thomas, Bob served 10 years in the Minnesota State Senate. He also was the State Chairman, and later National Committeeman, for the Minnesota Republican Party, and worked on too many campaigns to mention. He was a thoroughly honest and hardworking politician and would work with anyone who wanted to get things done – even across the aisle. From 1981-86, he served as Special Assistant and expert for the Secretary of Education. He was an education liaison to the White House on several task forces on private sector initiatives; represented Education on the Interagency Task Force on Voluntarism; initiated federal financial participation in national ad campaigns on adult literacy and cooperative education; and conducted national conferences on women in educational leadership and on business education partnerships for community colleges. He worked with members of Congress in creating and operating education policy task forces in both the House and the Senate. While in D.C., he also served as staff director of the Public Policy Committee of the White House Conference on Aging. In 1991, he was designated as the first Scholar in Residence at the National Association of Secondary School Principals. While there, he wrote the response of the National Educational Leaders Consortium to the education agenda of the Business RoundTable. In 2000, Bob published (with co-author, Jeff Cornwall) "The Entrepreneurial Educator", a book to help school leaders function in today's competitive marketplace. He served as editor of the book series "Innovations in Education" for Rowman Education Press, and was executive producer of a series of education policy television programs on National Goals in Education released in 1991. One of his greatest personal accomplishments was founding and running the St. Thomas National Youth Sports Program, a free academic and sports camp that served hundreds of low-income students and brought professional athletes in from the Minnesota Twins and Vikings to work with the kids and act as role models. He poured his heart and soul into the program for over 20 years. He would never turn anyone down who asked his for help, and served on too many boards to mention all, but some include: the Minnesota State Board of Medical Practice, Board of Advisors to the St. Thomas College of Education, Leadership Advisory Committee for Dunwoody College, the Civic Education Committee of the Minnesota State Bar Association, and Implementation Working Group of the Minnesota Minority Education Partnership. Family and friends knew him for his wonderful sense of humor and his unfathomable drive to improve educational opportunities for all, especially women, people of color and the economically disadvantaged. He loved music and sports, and cherished watching his kids and grandkids and the Twins and Vikings whenever he could. There will be a private family Mass of Christian Burial. Memorials can be made to St. Croix Valley Foundation with "Bob Brown/Dick Olsen" in the memo. MUELLER-BIES 651-487-2550

To plant trees in memory, please visit our Sympathy Store.
Published by Pioneer Press on Nov. 22, 2020.
MEMORIAL EVENTS
No memorial events are currently scheduled.
To offer your sympathy during this difficult time, you can now have memorial trees planted in a National Forest in memory of your loved one.
Funeral services provided by:
Mueller-Bies Funeral Home
GUEST BOOK
2 Entries
My sincere sympathy to all who knew and loved Bob. He was an amazing man and an influential teacher. I was extremely privileged to have him on my dissertation committee and he was very helpful to me not only in completing my dissertation and doctorate but in life in general.
My sincere sympathy.
Rachel Wobschall
Friend
November 25, 2020
I shared many a cup of coffee with Bob in the St. Thomas grill over the years and later, when we were semi-retired, at Coffee Bené. A finer friend and caring educator you could not find. I loved to see his smile and his "Let's make this happen" look whenever a good idea to help more learn more came into his mind. His obituary shows how many there were. Legions of a legacy. Bob was always there for his former students, and was also a font of helpful information and strategies to the many Deans of Education over the years. We were still working on some of his new ideas of betterment when COVID-19 struck. There needs to be a Robert Brown Plaque of Recognition on the Wall of Honor in the School of Education. He left the world all the better for his being here.
Dr. Tom King
Friend
November 22, 2020