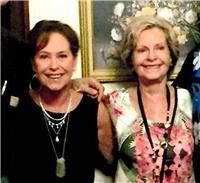 BORN
1962
DIED
2021
Daughter and mother, Celeste Eaton and Donna Eaton, passed away just over a month apart, this August and September, respectively.
Donna (Ibison) Eaton was born in Lafayette, Indiana, on July 31, 1937. She moved to Hayward, California in 1952. As a sophomore in high school, Donna met Herman Eaton, a senior, in 1953. Donna left Hayward in 1954 and went to high school in Lynwood, New Jersey, and then to Orleans, France. She returned to San Leandro, California, where she graduated from San Leandro High in 1956. Donna and Herman were married in May 1957, while he was in the navy.
Donna and Herman lost their first child, a girl, at birth, in 1958. Their son Stephen was born in December 1960, their daughter Celeste was born in June 1962, and their son Darren was born in September 1963.
Donna loved her home and family. She was a bookkeeper and secretary at Clink Electric, which they purchased in 1976 upon moving to Sonora. Donna had a very successful business, Donna's Creative Nails. She was past president of Women Aglow, a Christian women's group in Sonora.
Donna's favorite things to do were to visit the sick and give Christ's Holy Communion at St. Patrick's Church. She liked holidays, family gatherings and putting on dinners.
Their daughter, Celeste Eaton, was living in Sacramento when God took her back on August 15, 2021. She was 59.
Donna is survived by her husband of 64 years, Herman Eaton; her sons, Stephen Eaton, a retired truck driver, of Sonora, and Darren Eaton, and his wife, Kristin (Schilling) Eaton; Celeste's son, Jacob Johnson, and his daughter, Mia. Jacob is expecting a new daughter in December. Darren and Kristin's children, Wesley, of Sonora, and Willy, of Shaver Lake.
Celeste is survived by her son, Jacob, and his daughter, Mia; her father, Herman Eaton, her brothers, Stephen Eaton and Darren (wife Kristin) Eaton; and her nephews, Wesley and Willy.

Thank you, God, for loaning Donna to me for 68 years.
He took her back September 20, 2021
Herman
Published by Sonora Union Democrat from Nov. 29 to Nov. 30, 2021.
To plant trees in memory, please visit the Sympathy Store.
MEMORIAL EVENTS
To offer your sympathy during this difficult time, you can now have memorial trees planted in a National Forest in memory of your loved one.
MAKE A DONATION
MEMORIES & CONDOLENCES
0 Entries
Be the first to post a memory or condolences.