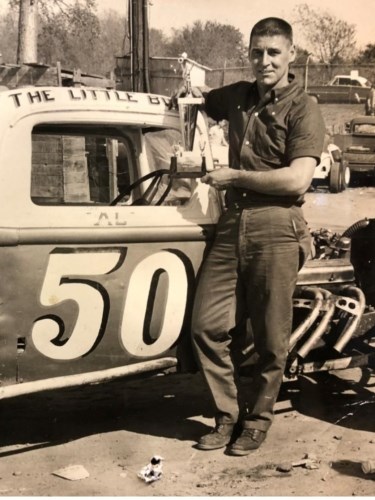 He owned stock cars for years, building and racing "The Little Princess", #50 in Hudson, NH and Groveland, MA. In 1963, Al won NH's state championship, taking home the largest trophy given out for stock car racing for that era. When Al retired from racing, he opened Riley's Auto Body in Goffstown, NH. Later on he opened Riley's Varney Street Auto in Manchester.

His family was his treasure, racing was his passion.

Members of his family include; two sons, Richard Riley and his wife Jeannette, of Florida; Thomas Riley and his wife Diane, of Bedford, NH; one daughter Elizabeth Potvin and her husband David, of Bedford, NH; eight grandchildren and 11 great grandchildren, three sisters, Alice, Nancy and Shirley Henderson, two brothers, Roger & James Riley. He was predeceased by his wife of 62 years, Diane D. "Chickie" (Wyskiel) Riley, who passed away in 2014. In addition, he was predeceased by his brothers, Glenn, David, Raymond, Robert, Harry, Edward, Ronald & Arthur and sisters, Martha & Doris.

SERVICES: Calling hours will be private. A graveside service will be held on Friday, October 15, 2021, 12 Noon at St. Joseph Cemetery, 448 Donald Street in Bedford, NH.

Donations can be made to Manchester VNA Hospice in memory of Al.

Phaneuf Funeral Homes and Crematorium assisted the family with arrangements. To view an online memorial, leave a message of condolence, or for more information please go to www.phaneuf.net

Published by Union Leader on Oct. 13, 2021.
To plant trees in memory, please visit the Sympathy Store.
MEMORIAL EVENTS
Oct
15
Graveside service
12:00p.m.
St. Joseph Cemetery
448 Donald Street, Bedford, NH
Funeral services provided by:
Phaneuf Funeral Homes & Crematorium - Hanover Street
MAKE A DONATION
MEMORIES & CONDOLENCES
4 Entries
I just learned of Al's passing, I am so sorry for the loss his family is feeling. I was very fond of him. He used to come into the diner regularly and always brought a smile to my face. Rest in Peace, Mr. Riley. You will be missed.
Gwen Cote
Friend
October 27, 2021
a real good cousin
champ ranfos
October 19, 2021
I send my sympathy to the whole family. Uncle AL was a great guy. I loved watching him race. God bless him.
Barbara Deshaies
October 14, 2021
You will be missed big brother.your race car will still live on with your friend Dwight(Ike) as you called him.we all loved you and know you are with your beautiful wife and all your family who have gone before you.RIP my big brother.love you forever
Shirley
October 13, 2021
Showing 1 - 4 of 4 results