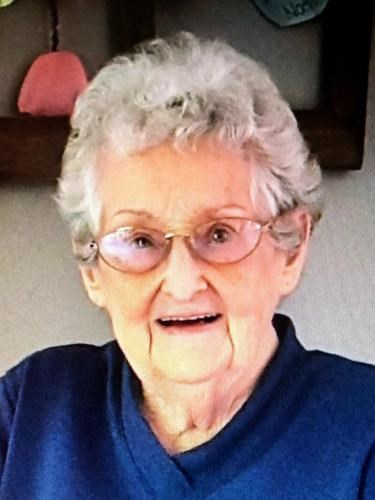 BORN
1929
DIED
2021
FUNERAL HOME
McHugh Funeral Home & Cremation Service
283 Hanover Street
Manchester, NH
Elaine St.Onge Roy of Manchester, NH passed away from natural causes on Monday, September 6, 2021. Elaine was born on January 24, 1929 in Montpelier, VT to Emilien and Rose (Bergeron) St.Onge and is survived by her daughter Judith Soucy and husband Bob Soucy of Goffstown, NH, her daughter Rebecca Smith and her husband Robert Smith of Manchester, NH, her son Douglas Roy and his wife Hilda Roy of Chandler, AZ, her son Brian Roy and his wife Sheryl Roy of Hillsborough, NH, 7 grandchildren and 11 great-grandchildren. She is predeceased by her husband Leon J. Roy, her son Michael J. Roy and her brother Leon J. St.Onge.

Elaine grew up in Montpelier, VT, but met her husband Leon while away at college in Burlington, VT. They were married shortly thereafter in 1949 and resided in Montpelier for the first 10 years before moving to Manchester, NH in 1959.

Elaine worked for many years as an administrative assistant for the John Hancock Insurance Co in Manchester, NH before retiring with her husband in 1986. Elaine and Leon traveled for many years before settling down in Mesa, AZ. Elaine returned to Manchester shortly after the death of her husband Leon in 2016 and most recently resided at the Villa Crest Nursing and Retirement Center.

Elaine loved to travel, served as a cub scout leader, enjoyed playing bridge, never missed reading the daily paper, and was an ardent basketball fan, following her two favorite teams, the Celtics and the Suns. She enjoyed living in New Hampshire and Arizona, but always dreamed of moving back to Vermont, which she referred to as "God's Country." She had a deep faith in Christ and will be laid to rest with her husband Leon Roy and son Michael Roy at the Mt. Calvary Cemetery in Manchester, NH.

There will be a private family service and burial at a later date.

Published by Union Leader on Sep. 19, 2021.
To plant trees in memory, please visit the Sympathy Store.
MEMORIAL EVENTS
To offer your sympathy during this difficult time, you can now have memorial trees planted in a National Forest in memory of your loved one.
Funeral services provided by:
McHugh Funeral Home & Cremation Service
MAKE A DONATION
MEMORIES & CONDOLENCES
3 Entries
Judy we´re very sorry to learn of your mother´s passing. Your memories will keep her close to your heart forever. Billy and Jane
Jane Vickery
Friend
September 19, 2021
Will forever miss your spark!
Sheryl Roy
September 16, 2021
Offering our deepest condolences during this difficult time.
The Staff of McHugh Funeral Home
September 19, 2021
Showing 1 - 3 of 3 results