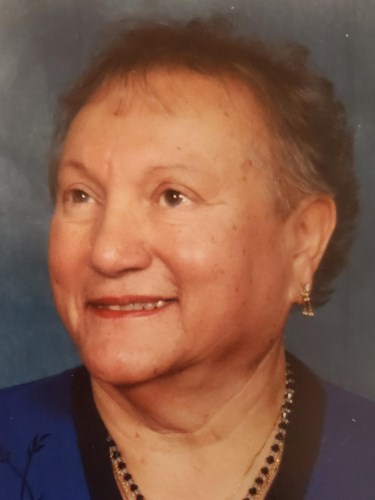 Beloved by many, preceded in death by her husband Harry, parents Jean-Paul and Edith, her Aunt Doris, brothers Leonard and Paul; survived by her son and daughter in law David and Michelle, sister and her husband Lorraine and Angelo; nieces and nephews - Debbie, John Paul and his wife Patrice, their children Michael and Lindsey.

Irene was born, raised, and met Harry in North Woodstock, NH. Irene went to the Mary Hitchcock School of Nursing, graduated in 1955, and began her career at the Hartford Hospital ER to be near Harry, her fiance. They were married in 1956.

In 1968 she worked on the surgical floor at McCook Hospital as part of an innovative team that opened the ICU, started the renal dialysis program, and instituted primary care nursing, where the patient always had the same nurse, and the nurse followed the patient. A really big deal that changed nursing care forever. By 1975, she was assistant director of nursing at Farmington Hospital.

In 1978, after Harry died, she went back to school graduating in 1983 with a degree in business. The faculty wanted to move out of the hospital to a faculty practice, and they needed an administrator. They originally were looking for a physician but gave Irene, a woman, a chance. That was the start of the UConn Medical Group (UMG). In 1989 she became an assistant dean, then an associate dean of nurses at UConn.

At 60, she retired from UConn, but her work and legacy did not stop there.

Irene had been part of the UConn Auxiliary since 1969 (its founding year) as the facilitator. Her proudest Auxiliary accomplishments were creating the Neonatal Intensive Care Unit Family Place at Homewood Suites for NICU parents and the NICU webcam project with the Rotary.

Irene had so much to do with medical care in Connecticut: starting up the open-heart surgery at Hartford Hospital, starting up the neonatal intensive care unit as we know it at the Health Center and at Children's, and helping bring paramedics to Connecticut. Her work over the years also helped with a lot of important research. Many people Irene mentored went on to do great things in Connecticut. She helped so many medical, dental, and nursing students with scholarships and travel money. Irene once recalled, "That's my life. I helped educate nurses and medical students and I met so many great people."

Irene enjoyed glass artist Chihuly and cooking, having published recipes in the Connecticut Cook Recipe books. Her heart was her family and her friendships, which she cherished and left an indelible impression on each and every one of us. She will be greatly missed.

In lieu of flowers, please donate to The Irene Engel Fund for Professional Advancement in Nursing

https://www.foundation.uconn.edu/fund/the-irene-engel-fund-for-professional-advancement-in-nursing/
Published by Union Leader on Sep. 12, 2021.
To plant trees in memory, please visit the Sympathy Store.
MEMORIAL EVENTS
Oct
15
Memorial Mass
10:00a.m.
St. Joseph's Church
25 Church Street, Lincoln, NH
MAKE A DONATION
MEMORIES & CONDOLENCES
2 Entries
So sorry for your loss . She was a loving kind and caring women. Having her in the choir holds those fun moments that we remember . Always felt like we knew her forever. That is how she made you feel when you were around her. May god bless her family.
Patty and David Paradis
September 11, 2021
My Deepest Sympathy to the whole Family. Irene is your Heart & Lives there forever!!
DORA POWER
September 9, 2021
Showing 1 - 2 of 2 results