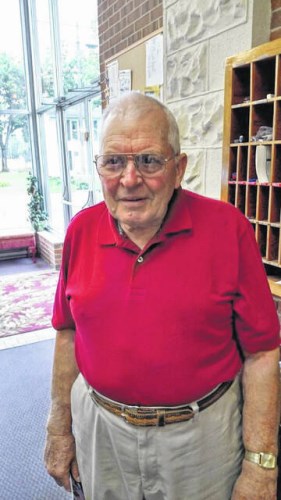 A lifelong resident of Champaign County, he was born on December 22, 1936 to the late Robert and Alberta (Meyers) McClure. He married Wilma Jean Sizemore on June 1, 1958.

In addition to his parents, he is preceded in death by his daughter, Diana Raynell McClure; and brother, Wayne McClure.

Richard graduated from Salem High School in Kingscreek. He was a milk hauler and farmer and a lifelong member of Kings Creek Baptist Church where he was trustee and usher. Special thanks to Rick and Jeannie Bahan for their loving support during Richard's stay in Green Hills.

The funeral service will be held at Kings Creek Baptist Church on Thursday, October 28, 2021 at 1 p.m. with a visitation two hours prior to the service. Pastor Chuck Samson will be officiating. Burial will follow in Kingscreek Cemetery.

Memorial contributions may be made to Kings Creek Baptist Church 1250 Kennard Kingscreek Rd. Urbana, Ohio 43078. Arrangements in care of WALTER & LEWIS FUNERAL HOME. Condolences may be expressed to his family by visiting www.walterfunerals.com.

Published by Urbana Daily Citizen from Oct. 25 to Oct. 26, 2021.
To plant trees in memory, please visit the Sympathy Store.
MEMORIAL EVENTS
Oct
28
Visitation
11:00a.m. - 1:00p.m.
Kingscreek Baptist Church
1250 Kennard Kingscreek Rd, Urbana, OH
Oct
28
Service
1:00p.m.
Kingscreek Baptist Church
1250 Kennard Kingscreek Rd, Urbana, OH
Funeral services provided by:
Walter & Lewis Funeral Home
MAKE A DONATION
MEMORIES & CONDOLENCES
2 Entries
We are so sorry for your loss of Richard. We have fond memories of him and the smile that never seemed to leave his face. Until we all meet again, God bless and comfort you all. With love, Pete and Barb
Pete and Barbara Floyd
Friend
November 1, 2021
We are so Sorry to hear about Richard. We loved being with you guys and sharing our lives together laughing and having fun. I have been so blessed in learning from him and how he taught me to look for simple solutions to complex mechanical problems. We love you very much. Roy and Jackie
Roy and Jackie Yocom
October 27, 2021
Showing 1 - 2 of 2 results