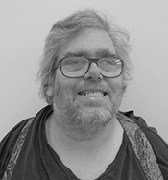 Greg Wycuff 1969-2020 Greg Laine Wycuff, age 51 of Shenandoah, IA entered into his heavenly home on Tuesday, December 15, 2020 at the Omaha Specialty Hospital in Omaha, Nebraska after a brief illness. Greg was born on October 6, 1969 in Kansas City Missouri to Karen (Peterson) Wycuff and Gary Wycuff. He attended school in Shenandoah. In his early years, Greg delivered papers for the Omaha World Herald. He later went to work at Nishna Productions in Shenandoah from 2004 until 2020. He enjoyed "detective" work. Collecting match box cars and enjoyed listening to gospel music brought him much joy. Some of his favorites included the Gaithers, the Blackwood Brothers and the Gatlin Brothers. Greg was a man that loved and served God in every way that he could. He was a former member of the Church of God of Prophecy. He was a current member of the First Baptist Church in Shenandoah. He could often be found walking around town and visiting with people that he ran into. Greg was preceded in death by his parents and a young sister. He is survived by his Aunt Pharma Komm of Lee Summit Missouri. He is also survived by his many friends, co-workers and care workers at Nishna Productions. Memorial Services were held at 10:30 a.m. on Tuesday, December 29, 2020 at the Hackett-Livingston Funeral Home with Pastor Don Buttry officiating. Inurnment followed in the Waveland Township Cemetery in Elliott, Iowa. Special music for the service included "I'll Fly Away", "The Old Rugged Cross" and "Give The World A Smile", some of Greg's favorite musical selections. Remembrances and condolences may be shared with the family at www.hackettlivingston.com. Hackett-Livingston Funeral Home was honored to have been entrusted with the arrangements.
To plant trees in memory, please visit our Sympathy Store.
Published by Shenandoah Valley News Today from Dec. 26, 2020 to Jan. 2, 2021.
MEMORIAL EVENTS
Dec
28
Visitation
1:00p.m. - 4:00p.m.
Hackett-Livingston Funeral Home
208 W Clarinda Ave PO Box 395, Shenandoah, IA 51601
Dec
29
Celebration of Life
10:30a.m.
Hackett-Livingston Funeral Home
208 W Clarinda Ave PO Box 395, Shenandoah, IA 51601
Funeral services provided by:
Hackett-Livingston Funeral Home
GUEST BOOK
0 Entries
Be the first to post a memory or condolences.