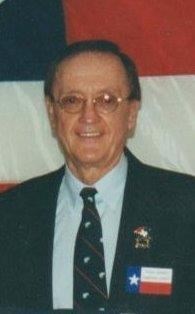 Frank was born on May 16, 1933 in Muskegon, Michigan to Frank Kelly Morris and Grace Robertson Morris. He graduated from Northwestern University with a bachelor of science in Speech Communication and earned his masters' degree from Boston University in Public Relations. He served his country for 21 years as a career officer last stationed at Edwards AFB in California.

He was married to Ann Welles Morris, his beloved wife and friend, who passed away on November 8, 1995.

Frank served the Republican Party of Texas over the span of three decades, served two terms as the Chairman of Cameron County over 20 years as well as served on the SREC. His accomplishments and years of service were celebrated at his retirement party on September 2015.

A memorial gathering will be held on Saturday, January 7th, 2017 at 2 p.m. at Buck Ashcraft Funeral Home.

You are invited to sign the guestbook or leave a memory at www.buckashcraft.com.

In lieu of flowers, donations may be made to a charity of your choice.

Published by Valley Morning Star on Jan. 5, 2017.
To plant trees in memory, please visit the Sympathy Store.
MEMORIAL EVENTS
Jan
7
Memorial Gathering
2:00p.m.
Buck Ashcraft Funeral Home
710 Ed Carey Drive, Harlingen, TX
Funeral services provided by:
Buck Ashcraft Funeral Home
MAKE A DONATION
Please consider a donation as requested by the family.
MEMORIES & CONDOLENCES
Sponsored by Buck Ashcraft Funeral Home.
4 Entries
Frank was one of my oldest friends dating back to 1952-53 when he was my upperclassmen at Northwestern University.
I only recently became aware of his death. I remember him as a close friend with whom I shared many fun times and he was in many ways my guiding hand.
I will always remember his kind, sharing and wisdom. As I said we had fun together. I have saved a few of the beautiful Xmas cards and messages he sent to me.
He will be missed and my best to his family.
Sincerely,
John Albertsen Tucson AZ
January 7, 2018
I was not aware until now that Frank had passed away, so I apologize for the belated words and memories. What a wonderful man Frank was, and someone I greatly admired. His wry sense of humor, and his keen political insights and maneuvers, will be missed forever. He was so good at what he did, and so unassuming, willing to let the primary light fall on others. He always made time to talk, and to visit, although I always benefited much more than he. I am a much better person for having known Frank, and for modeling some of who I am on who he was and will always be in my heart.
Chris Brisack
July 17, 2017
My deepest condolences to the family and friends of Frank. Rest assured life is precious. He promises to act in our behalf.
1 Corinthians 15:26
christian
May 15, 2017
To the Morris Children and their Families:
I was sorry to read of the death of your father. Please allow the God of all comfort to carry you through this difficult time.
Terri Steele
February 2, 2017
Showing 1 - 4 of 4 results