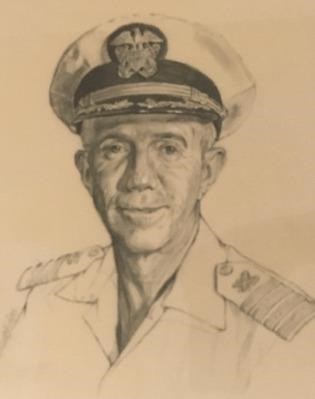 Our sweet father and grandfather, Capt. Richard C. Hogan, USN, ret., passed away on Armed Forces Day, May 16, 2020, and was laid to rest on Memorial Day weekend, Friday May 22, 2020. Quite fitting for a man who faithfully served his country for 36 years as a Naval Officer. His final duty station was at the Naval Surface Warfare Center, Port Hueneme Division (then NSWSES Port Hueneme) as Captain and Logistics Director.

His wife of 52 years, Nancy W. Hogan, predeceased him in 2014. He is remembered by his two children, Elizabeth W. H. Cordova, and Richard C. Hogan Jr. ("Chard") and his daughter-in-law, Maura A. Hogan. He is also remembered by his five grandchildren, Benjamin Cordova, Andrew Cordova, and Sarah Cordova along with Seamus Hogan and Sean Hogan.

Richard Hogan was raised in a family of eight children during the Depression where he learned the values he carried with him throughout his life. He has one remaining brother, Ken Hogan. As a young man, Richard enlisted in the Navy and was selected for the Officer Candidate School program where he attended Ole Miss, earning a BA in history and finishing a year of law school. He later obtained an MS and MA while serving with the Navy. He served valiantly and upon retiring, continued working as a college professor and joined the private sector to support of Systems Engineering and Management Company (SEMCO) and NSWC PHD for an additional twenty years. Capt. Hogan was a patent developer for a water reclamation project in addition to being a leader and mentor in the Society of Logistics Engineers (SOLE) to which he was a longtime member in good standing.

Most important to Richard "Dick", was his unwavering and faithful service to God, his devotion to family and his love and service to the United States and his treasured Navy. His sacrificial character and radiant countenance were ever-present despite hardships or obstacles.

We were not able to coordinate a large gathering or an honor guard for this highly decorated hero - but God ordained his days.

It was no coincidence that he passed into glory on Armed Forces day and was buried on Memorial Day weekend. A somber multitude of flags surrounded him in tribute for each of his fellow veterans that had passed before him. We are gently reassured that he was greeted with, "Well done my good and faithful servant." Farewell and Following Seas Captain Hogan, you are truly missed every day and we love you.


To plant trees in memory, please visit our Sympathy Store.
Published by Ventura County Star from Jul. 21 to Jul. 22, 2020.
MEMORIAL EVENTS
No memorial events are currently scheduled.
To offer your sympathy during this difficult time, you can now have memorial trees planted in a National Forest in memory of your loved one.
MEMORIES & CONDOLENCES
1 Entry
had the good fortune to meet & work with Dick during his days at SEMCO. He was generous with his knowledge of logistics enabling me to grow under his tutelage. His commitment to service was a key inspiration to me. My condolences to all of the Hogan family.
James Wilson
Coworker
July 22, 2020
Showing 1 - 1 of 1 results