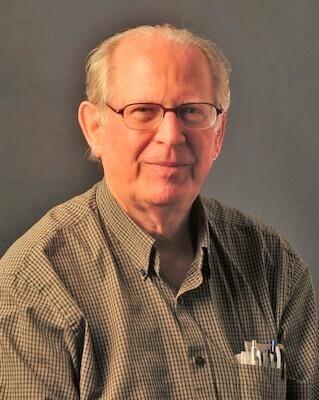 John Weigle had a double life.

By late afternoons and into the night he edited reporters' stories and proofread pages for the Ventura County Star.

Days off and morning hours were spent giving back to the community where he was raised.

For more than four decades, beginning with the Star Free-Press, Weigle was one of the paper's cornerstones.

A wordsmith? Of course! Where he excelled most was that as a punctuation specialist. Ask the question: "To comma or not to comma?" and he might surprise you with an apostrophe instead.

On his desk and on shelves behind his desk were an assortment of books on various subjects including grammar and geography, long obtained before the world of Google. (There was a rumor that Weigle packed away extra books into his car)

Weigle always had the latest Associated Press stylebooks and up-to-the-minute changes ranging from new words to new capitalization. He passed all of his cutting edge knowledge of the English language to fellow copy editors and reporters.

As one reporter recalled, "He was always a delight to talk to and glean information from. You never left a conversation with him without learning something new every time."

During his time with the Star, Weigle wrote columns about his longtime hobby of stamp collecting.

The columns continued after Weigle's retirement from the paper in 2011. So did his editing as he pored over club newsletters for the Ventura County Philatelic Society, the Federated Philatelic Clubs of Southern California and Channel Islands PC Users Group.

Subjects of his frequent philatelic stories included the postal history of Ventura County.

He volunteered for the Youth Stamp Fair and the Anacapa Middle School Stamp Club.

And if that wasn't enough to occupy his time, Weigle was a member of the Sunrise Optimist Club of Ventura.

He was born to Ralph Sedgewick Weigle and Mary Elizabeth Craven in Ventura. He died on Aug. 3 in Oxnard. Weigle is survived by his brother James Ray Weigle of Tooele, Utah, and James' children. He had a half brother Dick Craven Hope, who died in 2004.

His ashes will be scattered at sea.


To plant trees in memory, please visit our Sympathy Store.
Published by Ventura County Star from Sep. 8 to Sep. 9, 2020.
MEMORIAL EVENTS
No memorial events are currently scheduled.
To offer your sympathy during this difficult time, you can now have memorial trees planted in a National Forest in memory of your loved one.
MEMORIES & CONDOLENCES
6 Entries
John and I were good friends since we meet in the newroom of the San Fernando Valley State College, now California State University Northridge. We had much in common -- as editors of the school paper, the Sundial, as stamp collectors and as 1964 alumni, and as profound advocates of English grammar and style. May he rest in peace!
Les Goldberg
Classmate
November 19, 2020
What I remember most about John was his smile. I'm sure he could get angry, but I never saw it. Godspeed, my friend. You left the world a better place.
Tom Pfeifer
Coworker
September 15, 2020
We all benefitted from Mr Weigle's knowledge and desire to make the world a better place.
June W Lovell
Acquaintance
September 13, 2020
He was a good person ~ caring and wise.
Star
Coworker
September 11, 2020
I remember John as a major force in the Ventura County Philatelic Society. He led the way in promotion stamp collecting among youth with his involvement in the Youth Stamp Fair and the Youth Stamp Club. He donated a lot of his time keeping the Society going as Editor of the Society's Bulletin and making sure meetings were setup properly. Like the rest of the members he loved collecting stamps and he will be truly missed. Pat Cunningham, Stamp Society Member
Patrick Cunningham
Friend
September 9, 2020
I remember when John worked at the Ventura Star, he would cover general assignments, but his forte was postage stamps. He had an interesting column about stamp collecting and all the nifty stamps that he had collected..or seen in stamp sales. We would occasionally talk about my collection and the inheritance of my brother's stamp collection....I never brought the postage stamps by for him to look at. I regret that I failed to show him my stamp purchases of long ago. My condolences to John's family and friends.
Peter G. Drake
Acquaintance
September 8, 2020
Showing 1 - 6 of 6 results