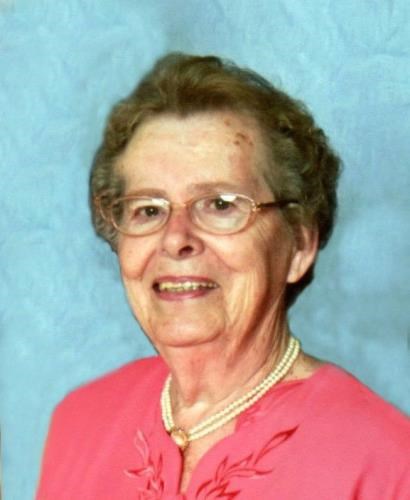 FUNERAL HOME
McWilliams Funeral Home
125 East 1st Street
Wellston, OH
HAMDEN - Patricia Ann Ward, age 88, of Hamden, passed away Friday, March 13, 2020, at the Holzer Assisted Living in Jackson. She was born March 12, 1932 in McArthur, Ohio to the late Thomas Sanford Johnston and Helen Elizabeth Bobo Johnston.
Patty was a 1950 graduate of McArthur High School, and in 1988, she graduated from Southeastern Business College earning an Associate's Degree in Accounting. Patty was a loving homemaker for the majority of her life, but in earlier years, she worked as a telephone operator for Bell Telephone Company. Patty was a hardworking woman who enjoyed sewing for herself and her daughters, cooking, and entertaining her family. Her faith in God and her church were a big part of Patty's life. She was a lifelong member of the McArthur Church of the Nazarene, where she served as church treasurer, as well as a Sunday School teacher, church custodian, and taking part in missionary work. Patty is survived by her children, Stephen M. Ward (Rita) of McArthur, Rebecca A. Wogan of Hamden, Timothy P. Ward (Cindi) of McArthur, Gary L. Ward (Christie) of Galena, and Rita G. Acker (Matthew) of Galena; grandchildren, Michael Paul Ward (Mandy), Melissa Barlow (Todd), Ron Wogan II (Meredith), Heather Brett, Ashley Zinn (Seth), Rachel Stith, Kayla Groseclose (Matthew), Brendan Ward (Courtney), Kayleigh Shepherd (Adam), and Austin Acker; sister, Sarah Ellen Prater (Ken) of Bolivar; along with 15 great-grandchildren and several nieces and nephews. Besides her parents, Patty was preceded in death by her husband of 52 years, Stephen H. Ward in 2005; sister, Margaret Joann Phillips; and brother, Thomas Johnston II. Calling hours were Sunday, March 15, 2020, from 5 to 7 p.m. at the McWilliams Funeral Home in Wellston.
The funeral service was held Monday, March 16, 2020, at 1 p.m. at the McArthur Church of the Nazarene, where family and friends may call one hour prior to the funeral service. Pastor Bill Roth and Pastor Todd Barlow officiated, and burial followed in the Elk Cemetery in McArthur. In lieu of flowers, the family would appreciate contributions in Patty's memory be given to the McArthur Church of the Nazarene, P.O. Box 488, McArthur, Ohio 45651. Online condolences can be sent to the family at www.mcwilliams-funeralhome.com.

Published by Vinton County Courier from Mar. 16 to Apr. 1, 2020.
To plant trees in memory, please visit the Sympathy Store.
MEMORIAL EVENTS
Mar
15
Calling hours
5:00p.m. - 7:00p.m.
McWilliams Funeral Home
125 East 1st Street, Wellston, OH
Mar
16
Visitation
12:00p.m. - 1:00p.m.
McArthur Church of the Nazarene
IL
Mar
16
Funeral service
1:00p.m.
McArthur Church of the Nazarene
IL
Funeral services provided by:
McWilliams Funeral Home
MAKE A DONATION
MEMORIES & CONDOLENCES
Sponsored by McWilliams Funeral Home.
10 Entries
No matter how old you are or how old your mother is, it is a huge loss. My thoughts and prayers are with you.
Lisa MacNamara
Family
March 16, 2020
Im so sorry for your loss. I remember attending church with you and your parents. They were always kind and Patty always had a smile. Your families are in my thoughts and prayers.
Sherry Friend
Friend
March 15, 2020
Patty was always a lady....knew her most of my life...remember as a young person when she and Steve were married and they "belled" them at his parents home. The whole town gathered to wish them well by ringing bells. They were a loving couple and the best. Prayers for family and Godspeed to Patty.
Janice Boyer
March 14, 2020
We shall always remember Patty as a quiet lady with a strong love for her God and an example for all who knew her.
Shirley Ward
March 13, 2020
Sorry about your loss. My thoughts and prayers are with the family.
Sue Metcalf
Friend
March 13, 2020
May God bless you and your family in this time of sorrow. So very sorry for your loss sending prayers for peace and comfort to all the family.
Kim Peck-Peoples
Acquaintance
March 13, 2020
Thoughts and Prayers to family and friends !
Stephen McWilliams
Friend
March 13, 2020
sorry for your loss
Kirt Ward
March 13, 2020
Tim and Cindi, I am so sorry. My thoughts and prayers are with you and your family.
Dianne Sheaffer
March 13, 2020
Sending thoughts and prayers to Patty's family. I have many memories of Patty at McArthur Nazarene Church, it's hard to imagine the church without her there. I have no doubt she is celebrating in heaven. May God keep you all even closer at this time.
Mary Zuber "Pierce"
Acquaintance
March 13, 2020
Showing 1 - 10 of 10 results