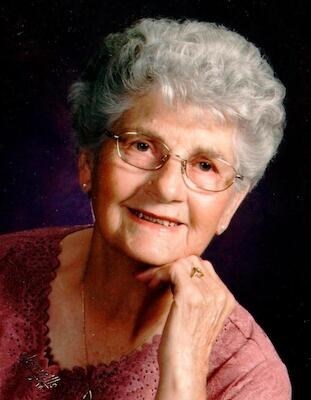 Tulare - Frankie Martin-Rodriguez, 95, Tulare, passed away May 27, 2021. Frankie was born to Robert Franklin Tomlinson and Mary Frances McBride on April 4, 1926, in Tecumseh, Oklahoma. She was the 13th of 14 children.

Frankie and her family followed the migration from Oklahoma to California during the Dust Bowl of the 1930's. Frankie remembered how wonderful it was when they arrived in Visalia, where her older sister lived. Frankie attended Liberty, Linwood, Walnut Grove, Laurel, Buena Vista and Aurora elementary schools. She graduated from Tulare Union High School in 1944.

In 1941, Frankie met Harvey J. Martin, they married on May 15, 1943, a few days before Harvey was deployed overseas. When Harvey returned from the war, they settled down in Tulare and raised their family. Harvey passed away in 1998. Frankie married Lou Rodriguez on November 24, 2001. Lou passed away in 2006.

Frankie was a hairdresser for over 60 years, she enjoyed work and her patrons became lifelong friends. She was active at Tulare First Baptist which she attended for 60 plus years. She was a lifetime member of the Tulare & Exeter Eagles Lodge and the Visalia Moose Lodge. Frankie loved to volunteer and help cook at all their events and fund raisers.

Frankie is survived by her sons Larry (Jeanne), Dale (Okcha), Dean (Hope). Eleven grandchildren and twenty-two great grandchildren. She is also survived by her sister Johnnie Jones, and numerous nieces and nephews. The family would like to thank Dora Chacon for being a great friend and caretaker of their mother. Frankie will be missed by all her family and friends.

In lieu of flowers, the family ask that you send donations in Frankie's name to any of following: Exeter Eagles Auxiliary, C/O Myra Marconette, 4142 E Feemster Ave, Visalia, CA 93292; Alzheimer's Association, 225 N. Michigan Ave., Floor 17, Chicago, IL 60601; or the charity of your choice.


To plant trees in memory, please visit our Sympathy Store.
Published by Visalia Times-Delta & Tulare Advance-Register from Jun. 9 to Jun. 12, 2021.
MEMORIAL EVENTS
No memorial events are currently scheduled.
To offer your sympathy during this difficult time, you can now have memorial trees planted in a National Forest in memory of your loved one.
Funeral services provided by:
Peers-Lorentzen Funeral Service
MAKE A DONATION
Please consider a donation as requested by the family.
MEMORIES & CONDOLENCES
Sponsored by Peers-Lorentzen Funeral Service.
0 Entries
Be the first to post a memory or condolences.