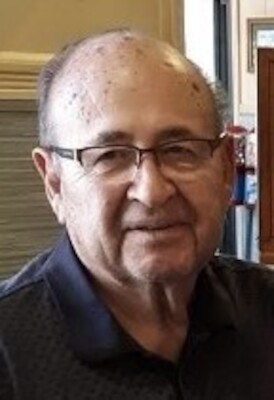 Tulare - Jose Ricardo Sanchez (Richard), 81, passed on to his eternal life on June 10, 2021 after a brief battle with cancer and dementia.

Richard was born on July 2, 1939 in Del Rio, Texas to Jose and Cesaria Sanchez, the youngest of 7 children. He moved to Tulare as a young boy. Richard attended Central High School in Tulare and was eager to join the work force. He began a career at Exide Batteries and enjoyed an early retirement when the plant shut down. He was soon looking for something to do and for the next 15 years found Haagen Daz to be a good fit.

Richard married the love his life Margaret Aguayo on June 2, 1961. They were married 48 years when Maggie gained her wings and became his angel. They built a wonderful life and raised 3 sons, Robert, Richard and Roger.

Richard and Maggie were very involved in St. Rita's Catholic Church, Tulare Western Band Boosters and once their grandchildren came along they supported and cheered them on at all of their events.

Richard was preceded in death by his wife Maggie and his son Robert and his siblings, Olivia, Raul, Joe, Lupe, Peggy, and Max.

Arrangements have been made by Peers Lorentzen Funeral Home. Viewing will be Thursday, June 17, 8:00 am, Mass 9:00 am, both at Peers Lorentzen, followed by Burial at Tulare District Cemetery, 900 Kern Ave. Condolences may be sent to www.plfuneral.com.