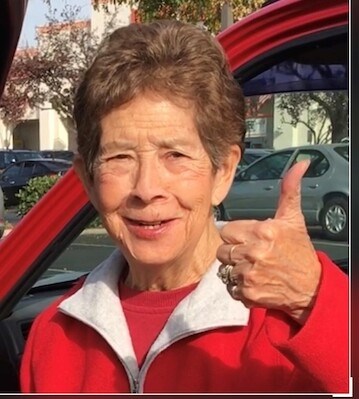 Our tiny, sweet Momma went Home on April 12, 2021 after a brief bout with pancreatic cancer. She passed into eternity surrounded by her four daughters at her home, where she wanted to be.

Mercedes Aguilar was born September 24, 1933 in Guatemala City, the youngest of three children of Justa Figueroa and Hector Aguilar.

As a young girl she loved school, dancing and candy. In her early twenties she joined a Guatemalan folklore dance troupe that once traveled to the White House and performed for President Eisenhower in the 50's. She was so proud to have said she "danced for my country", in that charming accent of hers.

She studied to be a P. E. teacher and made physical fitness a lifelong pursuit.

At the age of 25 she left Guatemala and followed her dear friend Emma to the United States to work as a governess for the John and Mavis Cain family and their seven children in La Canada, CA. It was there that she met Ivan W. Packenham at a Catholic Church dance social. They married on November 28, 1959 at St. Bede The Venerable Catholic Church in Flintridge, CA. Dad wisely latched onto this tiny beauty the day they met and didn't let go until his death in August of 2019, giving them nearly 60 years of marriage.

In 1961, Ivan and Mercy, as she was known, welcomed little Evelyn. Karen came along almost two years later, followed by Vicky in 1966, the same year the growing family moved to Visalia. Lastly, Brenda arrived and completed the family of six.

Mom was introduced to tennis by Dad and she was hooked! It was through her love for the sport that she met her best friend Maureen Bianco, and played tennis with the "Brady Bunch" for many years at Plaza Park. She continued to play tennis every single week until about three years ago, as age and its limitations crept in.

Boy, was Mom tenacious on the court! What she lacked in raw power she more than made up for in stealth and speed. She was well-known for her killer drop shots, many with spin, and caused more than one grown man to cry.

Mrs. Packenham worked for Mountain View Elementary School in Visalia for 26 years as a much beloved instructional aide. She also was very involved in her church over many years teaching CCD at George McCann and serving as a Eucharistic Minister at St. Mary's Catholic Church, even going to the homes of those physically unable to attend Mass.

Mom had a servant's heart, born of her love and gratitude to The Lord for so great a salvation which He provided for her, and which she personally accepted. He offers this same salvation to all who will come to Him by faith. Children, adults and even animals were drawn to her warmth, her love and grace. Always classy, always a lady, she exuded the love of Jesus to all, and those she left behind will always cherish her example and endeavor to follow it.

Family gatherings were filled with endless laughter, teasing and dumb jokes. Mom was the star of Family Game Nights, her answers often sending the rest of us into uncontrollable spasms of laughter. How we will miss those times with her! She was sharp, feisty and hilarious; precious beyond words.

MaMoo, Mookie Bird and Metch as various family members called her, leaves behind 9 grandchildren: Brian Harper, Kevin (Jenny) Harper and David Harper all of Visalia, Sam Unger (June), Hannah Unger and Jake Unger all of Kailua Kona, HI, Alec Roberts, Blake Roberts and Cambria Roberts all of Visalia. Also missing their Mookie are her two great-grandchildren Logan and DeeAnna Harper of Visalia. She leaves behind many dear friends, several nieces and nephews including Maria Elena Bevan-Martin and Ray Andrade. Mom was preceded in death by her husband Ivan and son-in-law Andy Harper.

A heartfelt thank you to the wonderful staff at Bristol Hospice, especially Moriah L., whose constant availability and warm presence brought laughter and joy into an otherwise very tough time.

A Celebration of Life Mass will be held on Friday, July 16, 2021 at 10:30am at St. Mary's Catholic Church in Visalia. Reception immediately following at the church hall.


To plant trees in memory, please visit our Sympathy Store.
Published by Tulare Advance-Register & Visalia Times-Delta from Jun. 11 to Jun. 12, 2021.
MEMORIAL EVENTS
Jul
16
Celebration of Life
10:30a.m.
St. Mary's Catholic Church
, Visalia, CA
MEMORIES & CONDOLENCES
2 Entries
I had the pleasure of working with Mercy my first few years of teaching at Mountain View before she retired. She was always smiling and loved by staff and students. She touched many lives.
Karen Weaver
Coworker
June 14, 2021
I am so blessed to have had her as my Momma, Momma, Momma! We had so many laughs together and I miss her immensely! She was so loved and the glue in our family! I loved being your "Wonder Woman"!
Brenda McCormick
Family
June 12, 2021
Showing 1 - 2 of 2 results