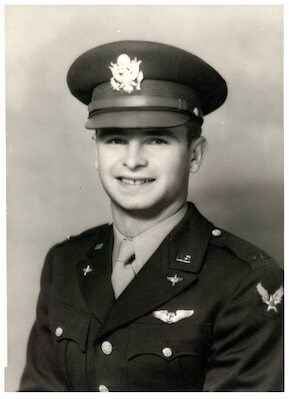 Morris J. Bennett born Dec. 9, 1922 in Armona, Ca. to John Bennett and Geraldine (McClurg) Bennett died June 7, 2021 in Visalia, Ca. He attended grammar school in Elderwood, Ca. and graduated from Woodlake High School in 1940. He met and married Ruth (McPhail) in 1941. He was preceded in death by his wife of 61 years, Ruth in 2002. He is survived by his brother Harold Basey of Groveland, Ca., three children, Gary Bennett wife Laurie, Virginia Bennett Tyler husband Lee, and Leroy Bennett wife Irene, five grandchildren and nine great grandchildren.

Morris joined the Woodlake Hardware workforce in 1940 as an appliance repairman and became manager and eventually owner until his retirement in 2015 at the age of 93. He was a flight officer during World War ll as a glider pilot. He participated in the invasion of Normandy, the battles in Holland and the breakthrough across the Rhine. He was awarded the Bronze Star in the liberation of Holland and besides the Bronze Star he also has three Air Medals, the Presidential Citation and the Group Citation of the 82nd Airborne Division.

Morris was a very active member of Woodlake serving as a Life member of Woodlake Rotary, past president of Woodlake Chamber of Commerce, Fire Chief of the Woodlake Volunteer Firemen, Scout Master, Baseball coach and Charter member of the VFW. He was named Man of the Year in 1970. He was also an avid sportsman enjoying hunting and fishing throughout his life. His greatest love was the Woodlake Hardware where he worked for over 70 years. He will be deeply missed.

In lieu of flowers, the family requests that remembrances be made to the Wounded Warrior Project in Morris' name.

Services are being planned for a later time.

Fond memories and expressions of sympathy may be shared at www.millerchapel.com for the Bennett family.


To plant trees in memory, please visit our Sympathy Store.
Published by Visalia Times-Delta & Tulare Advance-Register from Jun. 11 to Jun. 12, 2021.
MEMORIAL EVENTS
No memorial events are currently scheduled.
To offer your sympathy during this difficult time, you can now have memorial trees planted in a National Forest in memory of your loved one.
Funeral services provided by:
Miller Memorial Chapel
MAKE A DONATION
Please consider a donation as requested by the family.
MEMORIES & CONDOLENCES
Sponsored by Miller Memorial Chapel.
4 Entries
Sorry to hear about your father. Thinking about him knowing that he sold me one of his share of his stock in Inland Wholesale. Amazing to know that years later we would both benefit from that. We were both on the California Retail Hardware Association Board of Directors and I enjoyed working with him.
George Parker
Work
July 2, 2021
Our hearts are sad at your loss of your dad. He was a great friend to our family. Really one of the best. He's certainly enjoying his eternal home now. Glad we knew you Morris. You were a blessing to all of us.
Billie, Gayle, & Thelma Diamond
Friend
June 21, 2021
My sincerest condolences to the Bennet family and friends. I had the honor of knowing Mr. Bennet and the pleasure of listening to his many stories. Morris Bennet was a true American Hero.
Steve Tindle
Acquaintance
June 14, 2021
I thought so much of his intelligence. He knew when I came in looking for something I really couldn’t explain, he figured it , pulled it off the shelf in the back and it was the exact needed item. So enjoyed his expertise. If you couldn’t find it at Woodlake Hardware, it wasn’t made!
Sally Akin
June 12, 2021
Showing 1 - 4 of 4 results