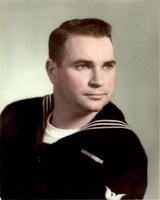 West Windsor, VT — Edson S. Pierce, 87, a lifelong resident of West Windsor, died at the Cedar Hill Continuing Care Community in Windsor on Sun., May 9, 2021. Edson was born on Feb. 12, 1934, to Horace L. and Eleanor M (Sawin) Pierce and from an early age, recognized service to God, his community, and family as his calling. Starting at the age of 5, he would make his way through the cold predawn to make sure that the fires in the schoolhouse and library were ready for the day. He graduated from Windsor High School in 1952 and enlisted in the US Navy in 1953. He served as an Aerographer in Trinidad and Tobago during the Korean War. After returning home in 1957, he married the love of his life, Blanche Kingsbury on June 5, 1959.

He retired from his career with the Vermont Department of Corrections after more than 30 years' service as an officer and Chief of Training and Security. During that time, he also started a business and became known as a detail-oriented painter and wall paperer.

His contributions to the community were recently recognized as part of the West Windsor Town Meeting, 2021 and his name was recorded in the Town Report. He was an original founder of the West Windsor Volunteer Fire Department and was a dedicated lifetime member of American Legion Post 25, serving in almost every capacity including Commander through the years. He also ran Bingo for the American Legion Post 25 for over 40 years. He took over his father's position as Town Clock Winder in 1960 and performed the task for over 40 years, taking great delight in educating generations of schoolchildren about the clock workings and pulling the massive weights. He was a schoolboard member, Justice of the Peace, member of the West Windsor Historical Society, Brownsville Cemetery Trustee, and Library Trustee. He was a lifelong member of the Brownsville Community Church and volunteered regularly at the Church suppers and delighted the children every December as Santa.

His community didn't stop at the Windsor town line. He was a lifetime member of The Forty & Eight, an invitation only national charitable and fraternal organization, with a focus on veterans and promoting child welfare and nurses training. He was a true believer in Republican values and supported the local, state, and national Republican Party. He was proud of being called to serve on the Presidential council during the Bush administration. He actively supported his fellow veterans in the region by calling bingo every Tuesday at the VA Medical Center in White River Junction.

He always found time to show his family how much he loved them and taught them to love their community like he did. Long Sunday drives on the back roads, stopping for picnics, hiking, and swimming holes, were punctuated by his dry English sense of humor and maybe a practical joke. During the winter, ice skating and sledding were the family pursuits. He helped them appreciate the vast bounty of Vermont's wilderness through trout fishing, hunting, and trapping. His love, generosity, and dedication will forever be remembered.

An outdoor Funeral Service will be held on Thurs., May 13, 2021, at 1pm at Brownsville Community Church with a burial to follow at Brownsville Cemetery. A visitation will be held on Wed., May 12, from 5 until 7 pm at Knight Funeral Home, Windsor, VT. To abide by capacity limits, funeral home staff will admit guests in order of arrival. In lieu of flowers, memorials are appreciated to the Lewy Body Dementia Association, Brownsville Community Church, Kurn Hattin Homes for Children, or your favorite charity to benefit children's wellbeing. Online condolences are appreciated at www.knightfuneralhomes.com.

He was preceded in death by his parents; wife, Blanche K. Pierce; a sister, Delphine Stratton; and one grandchild.

Published by Valley News on May 12, 2021.
To plant trees in memory, please visit the Sympathy Store.
MEMORIAL EVENTS
May
12
Visitation
5:00p.m. - 7:00p.m.
Knight Funeral Home - Windsor
65 Ascutney St, Windsor, VT
May
13
Funeral service
1:00p.m.
Brownsville Community Church
53 Brownsville-Hartland Road, Brownsville, VT
Funeral services provided by:
Knight Funeral Home - Windsor
MAKE A DONATION
Please consider a donation as requested by the family.
MEMORIES & CONDOLENCES
Sponsored by Knight Funeral Home - Windsor.
1 Entry
Although I only knew Edson towards the end of his life, at Cedar Hill, it was very apparent that he was a giver. He cared greatly for others and often was seen attempting to help another. EDSON, may you rest in peace❤
Doreen Stoodley
May 13, 2021
Showing 1 - 1 of 1 results