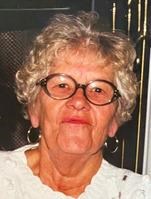 BORN
1932
DIED
2020
FUNERAL HOME
Desert View Funeral Home
11478 AMARGOSA RD
Victorville, CA
Anita Helga-Katharina Baltazar
Anita Helga- Katharina Baltazar, 88, passed away Friday afternoon on December 4, 2020, in Victorville, California.
Ms. Baltazar was born June 23, 1932 in Leipzig, Germany, the only child to Emil Kloetzer and Katharina Kloetzer. She was raised there, and is a survivor of WWII. Ms. Baltazar was an avid snow skier and earned a Master's Degree in Fashion Design & Creative Industries.
Post WWII, in Berlin where she later lived, she met and subsequently married PFC Gilbert Baltazar, U.S. Army. In 1958, she traveled to the United States and they made their first home in Wiggins, CO where Gilbert worked on his father's farm. In 1961, they moved to California and eventually settled in Montclair. After 23 years of marriage, they divorced. She is preceded in death by her parents, and Gilbert.
Ms. Baltazar worked as a supervisor in the garment industry in California for over 50 years, and was also a tailor. She was known for her sassy wit and playful heart. Anita enjoyed socializing, dancing, sewing, reading, swimming, boating, driving and playing her mandolin while singing to her kids. She was fluent in multiple languages.
Anita is survived by three daughters, Diana Baltazar and Patricia Baltazar of Victorville, CA; Loreen Baltazar of Somerville, TN; one son, Gene Baltazar of Victorville, CA; one cousin, twelve grandchildren, thirteen great-grandchildren and one great-great-grandchild.
Memorial and Inurnment services will be held Friday morning at 10:00, May 21 at the Desert View Funeral Home & Memorial Park, 11478 Amargosa Road, Victorville, CA 92392. 760-949-0328.
To plant trees in memory, please visit our Sympathy Store.
Published by Daily Press from May 12 to May 16, 2021.
MEMORIAL EVENTS
May
21
Memorial service
10:00a.m.
Desert View Funeral Home
11478 AMARGOSA RD, Victorville, CA
Funeral services provided by:
Desert View Funeral Home
MEMORIES & CONDOLENCES
0 Entries
Be the first to post a memory or condolences.