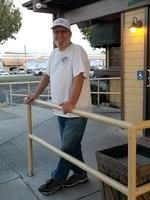 BORN
1955
DIED
2021
Daryl Leon Callaway
Daryl Leon Callaway or for those who knew him, Hotrod Callaway; beloved son, husband, father, grandfather, brother, uncle, and friend succumbed to the effects of COVID on Jan. 11, 2021. Daryl was born in Glendale Calif. on Jan. 12, 1955, but lived in the High Desert for the majority of his life. He graduated from Barstow High in 1973, and at 18 years old started a career with Santa Fe Railroad (BNSF) as a Switchman/Brakeman and went on to become a Conductor. During his time with the railroad the people he trained and worked with held him in highest regard. Two of his daughters, Elizabeth and Elysia also became Conductors/Locomotive Engineers with BNSF.
Daryl earned his nickname, Hotrod Callaway from his passion of racing whether it was in the dirt or on Main Street. Starting as a teenager and into his retirement, Daryl would make regular trips to the Bonneville Salt Flats with his dad. There he would watch the drag races and witness land speed records being set. Daryl traveled out of state to buy a brand new 1979 Silver Anniversary edition Trans Am. Running from the cops, racing up and down Main Street, and doing donuts in the Hardwick's parking lot became a couple of his favorite pastimes. In the 1980's, the off-road racing bug hit; Daryl, his dad George, brother George Jr, and friend Kirk founded GK Callaway and Sons Racing Team. His team went to win a number of Barstow races and placed 2nd overall in the Las Vegas Mint 400. Andie and Kenny spent many weekends cheering their Dads team on at the races. Daryl's passion and excitement for racing inspired many fellow Barstow off-road racers that are still racing today. In addition to refining his racing skills, he was also an excellent motorcycle rider teaching his son and nephew Patrick to ride. His mom even trusted him enough to ride shotgun on her way to work a few times.
Off the track, Daryl loved spending time with his family. A couple of special moments were attending Andie's graduation from UCLA, and sharing the father-daughter dance at her wedding.
When Daryl met Debbie, he fell in love with her and her children Elizabeth, Erniko, Vaughn and Elysia. Daryl's love for family grew even larger; he was an amazing and loving husband, father, and undisputed champion of the world grandfather. Daryl loved to tell stories and make you laugh; he always had an empathetic ear and helpful advice.
Daryl bought a side by side, which allowed him to enjoy off-roading with his family at a slightly slower pace. Much time was spent pulled up at local races and exploring many desert locations including Bonneville salt flats, Apple Valley, El Mirage, and Johnson Valley to name a few. Daryl enjoyed a bit of time indoors playing games on his computer, watching NASCAR, trophy truck races, and swapping race stories with his family and friends. He was happiest just hanging out with Debbie and family including the dogs, cats, and horses and a pony that sometimes made it inside the house.
Daryl is survived by his; wife Debbie, mother Bonnie Ingram, father George Callaway, stepmother Janice Callaway, children Andalee Breihan, Kenny Callaway, children Elizabeth Schmidt, Erniko Broderick, Vaughn Schmidt, Elysia Schmidt, 9 grandchildren; Kaylee, Vaughn Jr, Arriana, Cassie, Chloe, Sophia, Isaac, Madeline, Madison, and Keagan; 4 sisters; Katherine Hall, Teresa McMahan, Cheryl Riley, Jamie Cordova, step sister Tammy Walker, 3 step brothers; Johnnie Ingram, Clifford Ingram, Rory Ingram, 3 nephews; Patrick Haver, Justin McMahan, Austin Riley, 5 nieces; Meleah Riley, Tracy Lowe, Lauren Fuentes, Missy LaFond, and Shanon Oshea.
Daryl was preceded in death by his stepfather John Ingram, Brother George Callaway, Aunt Betty Humphries, and nephew Michael Willetts.
Daryl, we will miss your bright blue eyes, sweet smile, making us laugh, your caring nature, as well as your spirited opinions.
Race on Hot Rod Callaway! We will see you at the finish line.
To plant trees in memory, please visit our Sympathy Store.
Published by Daily Press from May 9 to May 12, 2021.
MEMORIAL EVENTS
No memorial events are currently scheduled.
To offer your sympathy during this difficult time, you can now have memorial trees planted in a National Forest in memory of your loved one.
MEMORIES & CONDOLENCES
2 Entries
I worked with Daryl in Barstow from 1976 to 1995. He was one the best at his job, always a smile and never an evil word about anyone. A good man gone to soon.
May he Rest In Peace my condolences to his family may the Lord above rap his loving arms around you all.
Lee Williams
May 19, 2021
I'm so sorry for the families loss. Daryl was a sweethearts family man that loves his children very much. He was funny and down to earth and I will never forget how he welcomed me into his family. Prayers. I love you all.
Angelina
Acquaintance
May 10, 2021
Showing 1 - 2 of 2 results