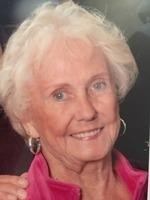 BORN
1934
DIED
2021
FUNERAL HOME
Victor Valley Mortuary
15609 11th Street
Victorville, CA
Virginia "Ginny" Thurlow
Apple Valley - Ginny Thurlow of Apple Valley, CA was taken into fellowship with her Lord and Savior on May 3, 2021. Born in Portland Maine to Phillip and Mary Canton on July 12, 1934. Ginny attended parochial and high school in the greater Portland area.
Ginny precedes in death her husband of 69 years (Dick) and now rests in the hands of our Lord and Savior, Jesus Christ. The pair were married on April 29, 1952 in Portland Maine. Upon conclusion of Dick's US Air Force overseas assignment, the two were relocated to George Air Force Base in Victorville, CA. Following his discharge from the service in 1955, they remained to make the Victor Valley area their permanent home.
In the later 1950's, Ginny's first job was at Layne's Dress Shop in Old Town Victorville. She later worked as an office clerk at McMann's Furniture store before going to work for the late orthodontist, Dr. Gilbert McAdams of Apple Valley. She retired following thirty years as Office Manager. Upon her retirement in the early 1990's, she and husband Dick enjoyed their home in Apple Valley, as well as many vacations by sea and air. Though, the two finally settled into their favorite place on the Balboa Peninsula in Newport Beach, where she and husband Dick spent may weeks throughout the remaining years enjoying blue skies, white sands and cool ocean breezes.
To meet Ginny was to know Ginny, as many of those that met her would readily testify. A woman with a fixed smile, much love, tenderness and understanding, she always brought the best out of those lucky enough to have claimed her as a friend.
Ginny's priorities always started at home where she took much pride in raising her three sons. She leaves behind son, Scott and wife Pam of Big Bear City, CA, along with their son, daughter and grandson. She also leaves behind son, Steve and his wife Karen of Tucson, AZ, along with their son, a late son and 2 grandsons. Also left behind is her youngest son Rick, his wife Tracy and their son, daughter and 4 grandsons.
Memorial services will be held at Victor Valley Mortuary at 15609 11th St, Victorville, CA on Saturday, June 5th at 10 am.
Ginny shall later be interned into the Military Veterans "Wall of Valor" at Sunset Memorial Park in Apple Valley, CA. A private internment shall be held with family only.
To plant trees in memory, please visit our Sympathy Store.
Published by Daily Press from May 27 to May 30, 2021.
MEMORIAL EVENTS
Jun
5
Memorial service
10:00a.m.
Victor Valley Mortuary
15609 11th St, Victorville, CA
Funeral services provided by:
Victor Valley Mortuary
MEMORIES & CONDOLENCES
1 Entry
I am so sorry to read about the death of your loved one, Virginia Thurlow. Please accept my deepest condolences. May the God of all comfort be with you all during this difficult time.
Yvonne Marcuzzi
June 1, 2021
Showing 1 - 1 of 1 results