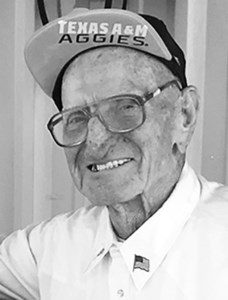 Arnold was born Jan. 1, 1932, in Leroy, the son of Arnold and Agnes (Straten) Kasberg. He was a 1950 graduate of West High School. During his high school years he played football, baseball, and was on the wrestling team and the boxing team. On Aug. 2, 1953, he was united in marriage to Patsy Thompson in Tours. Patsy preceded him in death on June 7, 2000. Arnold was a faithful member of St. Martin's Catholic Church in Tours. He worked for Central Texas Iron Works for 36 years. He loved all sports and was a avid fan of the West Trojan football team. Arnold gave religiously to the American Red Cross since he was 18 years old and has notably donated over 36 gallons of blood in his lifetime. He was a member of Catholic Life Association, K.J.T. Society #31 of West, the Knights of Columbus Council #2305, and was a former President of the SPJST Lodge 6 in Cottonwood. Arnold enjoyed working on the farm and gardening. He loved spending time with his family, especially his grandchildren and great-grandchildren.

In lieu of flowers, memorials may be made to St. Martin Catholic Church or St. Martin Cemetery Association. The family would like to thank his neighbors in West for their love, support and kindness given to our father for the past four years. A memorial guest book found at www.aderholdfuneralhome.com

To plant trees in memory, please visit our Sympathy Store.
Published by Waco Tribune-Herald on Nov. 18, 2020.
MEMORIAL EVENTS
No memorial events are currently scheduled.
To offer your sympathy during this difficult time, you can now have memorial trees planted in a National Forest in memory of your loved one.
Funeral services provided by:
Aderhold Funeral Home
GUEST BOOK
1 Entry
Thanks Red for allowing me to obtain that great property at Kasberg Rd and Grellhesel. It is perfect for my family. That 30x30 shop is one of the best constructed metal building I have ever had. God bless.
Richard Miller
November 18, 2020