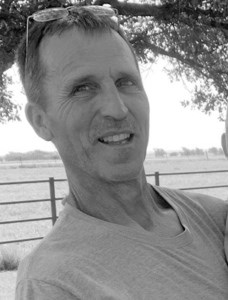 Art Kleypas, or Arty as his friends lovingly called him, passed away on November 11, 2021, at his home surrounded by love after his courageous battle. Services will be 7 p.m., Tuesday, November 30, at the Oakcrest Funeral Home Chapel, 4520 Bosque Blvd, Waco.

Art was born June 16, 1958, in Waco, TX, to parents George and Rita Kleypas. He graduated from Midway High School in 1976 and got his physical therapy degree from University of Texas at Galveston. Art got his first job at Navarro Regional Hospital where he met the love of his life, Cindy. They moved to Waco and married October 25, 1987, and had four beautiful children who filled their home with laughter and joy.

Arty loved his children, grandchildren, motorcycles, crossword puzzles, fast cars, dogs, and all sports. He could conversate with anyone and make anyone's day. Art worked at Providence Hospital after he moved to Waco up until he got ill in April of 2021, where he brightened coworkers and patients spirits claiming it was "just another day in paradise!" His positivity radiated, and he always gave and never asked for a thing. He loved peanut butter and jelly sandwiches and his dog Charlee who was by his side when he left for Heaven. His mark of kindness has been left on all he has crossed paths with.

Art was preceded in death by his son, Zak Kleypas; and his mother, Rita Kleypas.

Survivors include his beloved wife, Cynthia Kleypas; his children, Amy Prince and Zek Kleypas; his brothers and sister, Terry, Jeff, and Tanya; his father, George Kleypas; and his grandchildren.

In lieu of flowers please donate to "the 13 fund" at The Providence Foundation at 254-751-4000. The 13 Fund is in Memory of Art and Zak Kleypas for an Oncology Childrens Playroom.

Published by Waco Tribune-Herald on Nov. 28, 2021.
To plant trees in memory, please visit the Sympathy Store.
MEMORIAL EVENTS
To offer your sympathy during this difficult time, you can now have memorial trees planted in a National Forest in memory of your loved one.
Funeral services provided by:
OakCrest Funeral Home - Waco
MAKE A DONATION
MEMORIES & CONDOLENCES
Sponsored by OakCrest Funeral Home - Waco.
5 Entries
I went to high school with Arty. I remember him as a very well liked person. My condolences to his family.
Steven
Friend
November 29, 2021
Art was such a dear, sweet guy. He was my therapist when I had shoulder surgery many years ago. He was my friend ever after that. He was always guaranteed a hug from me. I will miss him dearly. Prayers to his wife and family.
Kelly Ferguson
November 28, 2021
I was honored to have worked with art for 15 years and he helped when a family member was hospitalized that needed physical therapy he was very intelligent and had a way of making people feel at ease and that they could try again and get stronger . I know he is well and whole again and will always be a light of strength what an amazing person . Thanks art for being a friend . Jesus says "So you have sorrow now but you WILL SEE ME AGAIN and NO ONE can take that JOY from you " and God shall wipe away all the tears from their eyes and there shall be no more DEATH no more SORROW. Praying for peace for you all.
Sherri
November 28, 2021
May God bless you and your family in this time of sorrow.
Mae
November 25, 2021
So very sorry to hear. Prayers for all the family.
Mindy Brunton
Other
November 24, 2021
Showing 1 - 5 of 5 results